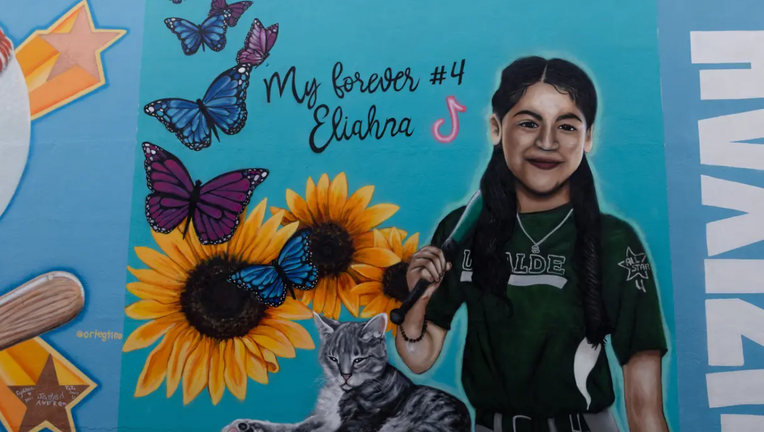 A mural in memory of Eliahna A. Torres near the town plaza in Uvalde in September.

The mother of a 10-year-old killed in the Uvalde school shooting has filed a federal lawsuit against the gun-maker and seller, the city of Uvalde, its school district and several law enforcement officers.

Sandra Torres’ daughter Eliahna was one of 19 students and 2 teachers killed by an 18-year-old gunman at Robb Elementary in May.

"I miss her every moment of every day," Torres said in a joint press release with her lawyers from Everytown for Gun Safety’s legal team and Texas-based LM Law Group. "I’ve brought this lawsuit to seek accountability. No parent should ever go through what I have."

The new lawsuit alleges that Daniel Defense — the manufacturer of the shooter’s weapon — violated the Federal Trade Commission Act, arguing that the Georgia-based company’s marketing on social media and video games "prime young buyers to purchase AR-15-style rifles as soon as they are legally able." Earlier this year, gun-maker Remington settled a lawsuit for $73 million with the Sandy Hook shooting victims’ families who had also targeted the company’s marketing.

Torres’ lawsuit also accused Oasis Outback of "reckless dereliction" of selling weapons to the 18-year-old shooter. Some store patrons later told the FBI that he had "appeared odd and looked like one of those school shooters."

The suit also accuses various law enforcement officers of failing "to follow active shooter protocols." It argues that their decision to treat the active shooter as a "barricaded subject" inside the two classrooms had violated the victims’ constitutional rights.

In July, a Texas House report found "systemic failures" among the 376 officers who responded to the massacre. And earlier this month, investigators launched an inquiry to determine if a faster law enforcement intervention could have saved more victims.

"The massacre that killed Eliahna Torres and 20 others that day wasn’t just an act of one violent, troubled young man armed with an assault rifle. There are several actors responsible for putting the gun in his possession and failing to protect the children he attacked," Eric Tirschwell, executive director of Everytown Law, said in the news release.

The city of Uvalde and its school district both said that they do not comment on pending litigation. Though school district spokesperson Anne Marie Espinoza added that "as a district, we focus on supporting our students and their families as we continue to navigate these unprecedented times." Daniel Defense did not immediately respond to The Texas Tribune’s request for comment. The Tribune called the Oasis Outback, but its owner could not immediately be reached.

Many of these defendants have also been facing a federal lawsuit filed by the families of three student survivors in September, which alleges that the parties’ actions and negligence contributed to the shooting. This followed another claim filed in August seeking $27 billion from the school district and other government agencies to compensate the victims.

Even as she pursues accountability, Torres’ pain of losing her daughter remains raw.

"She yearns every day to be close to Eliahna; she decorates her grave with the seasons and got a tattoo of her name on her forearm. She has left Eliahna’s phone operational so that Eliahna’s grandmother can still call and hear Eliahna’s voice every day," read the complaint.

Jinitzail Hernández contributed to this story.

Disclosure: Everytown for Gun Safety has been a financial supporter of The Texas Tribune, a nonprofit, nonpartisan news organization that is funded in part by donations from members, foundations and corporate sponsors. Financial supporters play no role in the Tribune's journalism. Find a complete list of them here.

For more info, head to the Texas Tribune