A vigil was held Wednesday night for those killed at Robb Elementary in Uvalde.

UVALDE, Texas - A vigil was held Wednesday night for those killed at Robb Elementary in Uvalde.

The names and faces of the young victims and their two teachers were shared by their grieving loved ones in the hours after an 18-year-old murdered them at school.

Governor Greg Abbott was among the mourners, along with law enforcement, state and local leaders who attended a prayer vigil for the 21 shooting victims.

Hundreds of people gathered at the Uvalde County Fairplex Arena, their faces filled with sorrow.

There were tears and hugs as families mourned their children, friends, and neighbors.

It was standing room only inside of the venue.

Emotions were raw as the community came together to remember the 21 innocent victims who died while sitting in a classroom Tuesday morning.

As a FOX 4 crew entered the Uvalde County Fairplex, they ran into a woman and her young daughter. The mom said her daughter went to school with many of the victims, so she wanted to make a sign with their names, along with the two teachers who died. 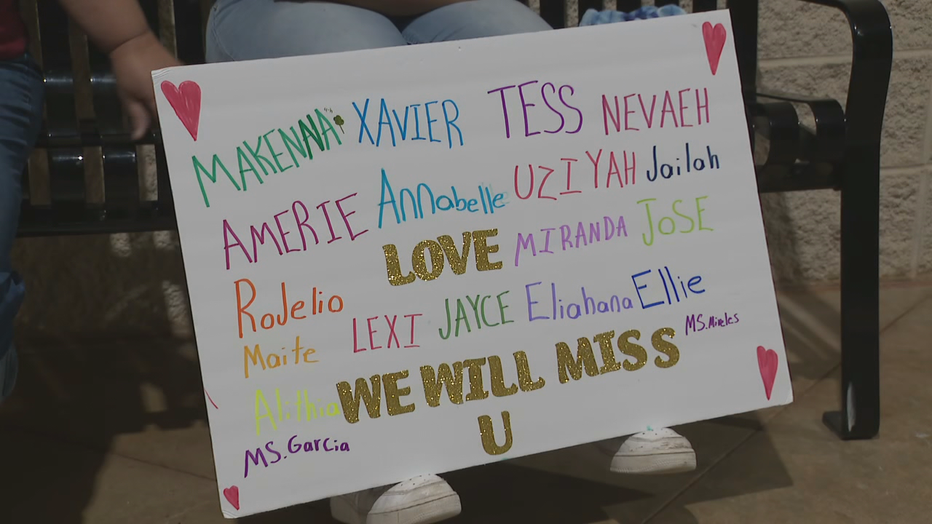 There were also therapy dogs on hand.

Hundreds of people sat in the stands trying to support one another.

Instead of sitting on stage with the rest of the officials, Gov. Abbott and Senator Ted Cruz chose to sit with the residents.

As the service began, people began to wipe away their tears.

Pastors from different local churches tried to offer words of hope to this small-knit community.

They asked that reporters not talk to people during the prayer service.

Two women outside beforehand talked about why they were there.

"We’re all here for them, were coming together, sharing support, love, doing everything that we can. You know there’s not much that we can say to the ones that have been personally affected by it, but just show them that we’re here, we hear them, and know they’re not alone," Martina Avila said.

"Most everyone here is alumni and alumni from the high school. I graduated in 2019, so literally, even my grandparents went to school here," Ravenn Vasquez said. "For right now, I think politics need to be put aside because instead of talking about the victims or the town or what happened here, we’re talking about policies. Like I understand things have to change, enough is enough, right, but the town, we need to mourn. Every time we open our phones, it’s just Uvalde, so it’s all over the news. We can’t get an escape right now. So I just want to let all the families know I’m here for you. All this is my way for supporting you all."

Vasquez said she doesn't want this shooting to define her small town. She said Uvalde is greater than this and time will heal these fresh wounds.