Both statewide and Uvalde elected leaders have said they want full transparency about what happened in the near hour and a half it took for law enforcement to kill a school shooter. They called for the release of surveillance video on their terms, but an Austin-based news outlet had it and released it anyway.

UVALDE, Texas - There is a lot of anger from the citizens of Uvalde who are furious over how the city and law enforcement have handled the fallout from the school shooting.

It comes after a news outlet posted surveillance inside the school showing the police response even though elected leaders wanted to wait.

Both statewide and Uvalde elected leaders have said they want full transparency about what happened in the near hour and a half it took for law enforcement to kill a school shooter.

MORE: Video from inside Uvalde school shows officers milling around hallway during massacre

They called for the release of surveillance video on their terms, but an Austin-based news outlet had it and released it anyway.

The Austin American-Statesman and KVUE-TV obtained surveillance and some body camera footage from the Uvalde school shooter response.

The outlets initially published an edited clip of the 77-minute ordeal. But now, the full surveillance footage is online.

Elected leaders investigating the shooting, and Uvalde city leaders expressed anger that they didn't get to show families first before it was made public.

At a Uvalde City Council meeting, the mayor and council members were ticked off at the news outlets, and that’s putting it politely. That being said, the anger of some community members is focused on law enforcement.

The Austin American-Statesman and KVUE obtained surveillance inside and outside Robb Elementary School in Uvalde as well as body camera footage from one officer.

On Tuesday, the paper posted an edited clip on its website before posting the full video online.

It depicts the crash outside the school and shows the first images of the gunman inside the school before he fired more than 100 shots inside two conjoined classrooms, killing 19 kids and two teachers. 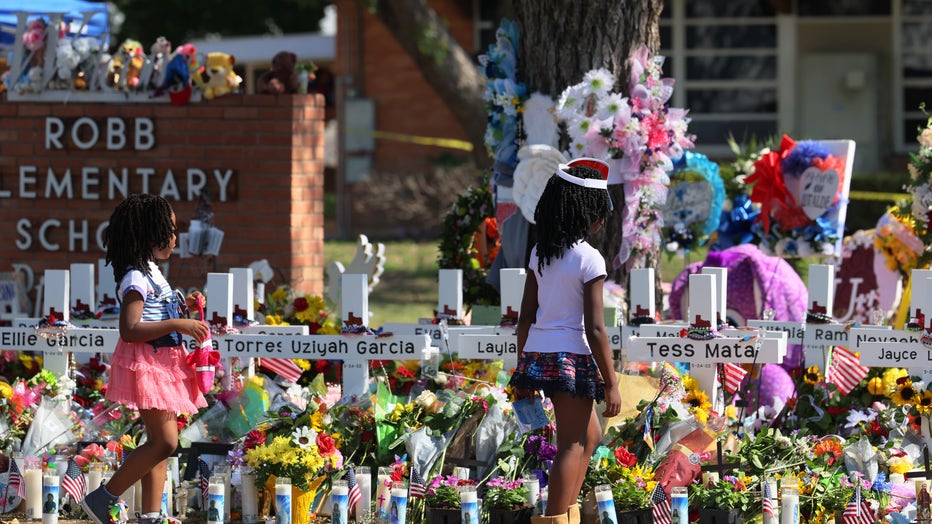 UVALDE, TEXAS - MAY 28: Young girls pay their respects at a memorial to the victims of the Robb Elementary School mass shooting on May 28, 2022 in Uvalde, Texas. Nineteen children and two adults were killed on May 24th during a mass shooting at Robb

The first group of officers ran toward the classrooms three minutes later, but they quickly retreated after shots were fired.

Nineteen minutes into the video, it shows heavily armed officers in position. You can see at least one shield. Twelve minutes later, there are more shields.

Fifty-seven minutes after the gunman walked into the school, heavily armed and shielded officers went down the hallway toward the classrooms, but, again, they didn’t breach.

A total 77 minutes passed between the gunman’s arrival at Robb Elementary School and law enforcement finally killing him.

"And when I looked at that video and I saw the officers who were standing in that hallway doing nothing except standing back, I was very, very disappointed," one community member said.

Elected leaders had a different reaction to the release of the video.

The Texas House committee investigating the Uvalde shooting wanted to wait until Sunday when it released its final report on the shooting response. It wanted to first meet with family members of victims and Uvalde community members before releasing the footage.

Committee members Tuesday expressed frustration with the release. But Uvalde’s mayor took it a step further.

"This was wrong to do it this way. That video needed to be released, but the families should’ve got to see it first," said Uvalde Mayor Don McLaughlin. "The way that video was released today is one of the most chicken things I’ve ever seen."

One community member fired back at that claim.

"What about the cops?! Are they chicken s**t?" the community member said.

Texas DPS Director Steven McCraw said the video provides horrifying evidence that the law enforcement response to the attack was an abject failure.