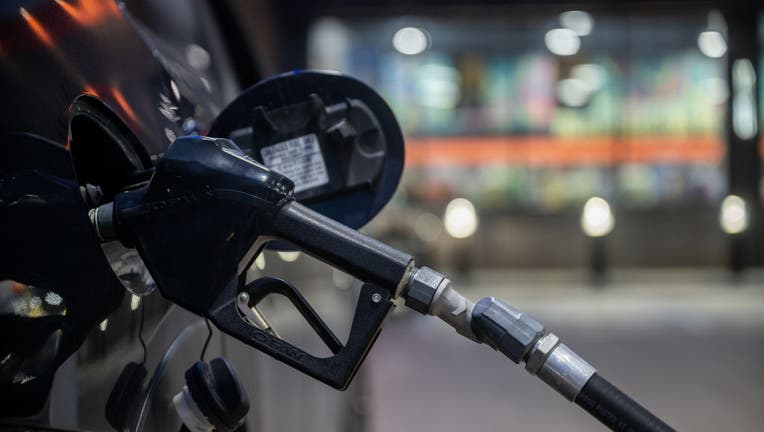 HOUSTON, TEXAS - DECEMBER 05: In this photo illustration, a gas pump is filling up a vehicle at a Chevron gas station on December 05, 2022 in Houston, Texas. U.S. gas prices have dropped towards $3 a gallon, with global gas prices having steadily dro

NEW YORK - The nationwide average price for a gallon of gasoline has plunged to $3.26, the cheapest it’s been in over a year.

"The national average gas price is down to $3.26 a gallon – the cheapest it’s been since October 2021," the White House tweeted Monday.

While the White House was quick to point out the latest numbers, AAA says seasonality is the main cause — and not everyone is seeing cheaper gas.

AAA said there are now approximately 34 states with averages lower than last year. However, western states including California, continue to see gas prices higher than the national average. Whereas many southern states, such as Texas, are seeing the exact opposite.

"The seasonal pattern of less driving due to shorter days and crummy weather, combined with a lower oil cost, is driving gas prices lower," Andrew Gross, AAA spokesperson, said in a news release. "If this trend continues, many states could see their average prices fall below $3 a gallon by early next year."

Gas prices have tumbled after topping out at $5 a gallon in June.

Analysts say gas prices will likely continue to drop, though not as sharply as in recent weeks given the decision by OPEC to continue cutting production.

The lower gas prices come as many economists believe inflation has peaked.

On Tuesday, President Joe Biden signed the Inflation Reduction Act into law and it includes the most substantial federal investment in history to fight climate change — some $375 billion over the decade — and would cap prescription drug costs at $2,000 out-of-pocket annually for Medicare recipients. It also would help an estimated 13 million Americans pay for health care insurance by extending subsidies provided during the coronavirus pandemic.

Wholesale prices in the United States rose 7.4% in November from a year earlier, a fifth straight slowdown and a hopeful sign that inflation pressures across the economy are continuing to cool.

"Overall inflation is moving in the right direction, though at a slow pace," PNC Financial Services Group said in research note. "The Federal Reserve’s monetary policy tightening plans will remain aggressive until clear, consistent signs of inflation’s demise have been demonstrated."

AAA also said the drop in gas prices may be reversed by the results of a recent meeting of OPEC+, a group of 23 oil-producing nations, including Saudi Arabia and Russia.

"OPEC+ decided to maintain output cuts of 2 million barrels per day, about 2% of world demand.," the agency said. "The purpose of the move is to boost the global price of oil, which has fallen recently on fears of demand weakness, specifically in China."

"But with oil being the main ingredient in gasoline, OPEC+’s move could slow this decline," Gross continued.