US to welcome Ukraine refugees but no longer through Mexico

President Joe Biden outlined what he's calling a "streamlined" process to bring Ukrainian refugees to the U.S. on Thursday.

President Joe Biden outlined what he's calling a "streamlined" process to bring Ukrainian refugees to the U.S. on Thursday.

Part of that process means, starting Monday, Ukrainians who arrive at the southern border seeking asylum will no longer automatically be admitted into the U.S.

Thousands of Ukrainians have flown to Mexico and traveled to the U.S. through the border seeking asylum.

They've been exempt from Title 42, which turns away asylum seekers as a health precaution.

But starting Monday, they'll be directed to take part in a new program, which seeks to link them with sponsors before entering the U.S.

Refugees from all over the world come to the U.S. through Mexico.

The new streamlined plan from President Biden is to speed up the process, but Ukrainians can't enter through Mexico starting Monday.

About 15,000 Ukrainian refugees have made their way to the United States since Russian troops invaded Ukraine in February.

Most came through the U.S. border with Mexico. 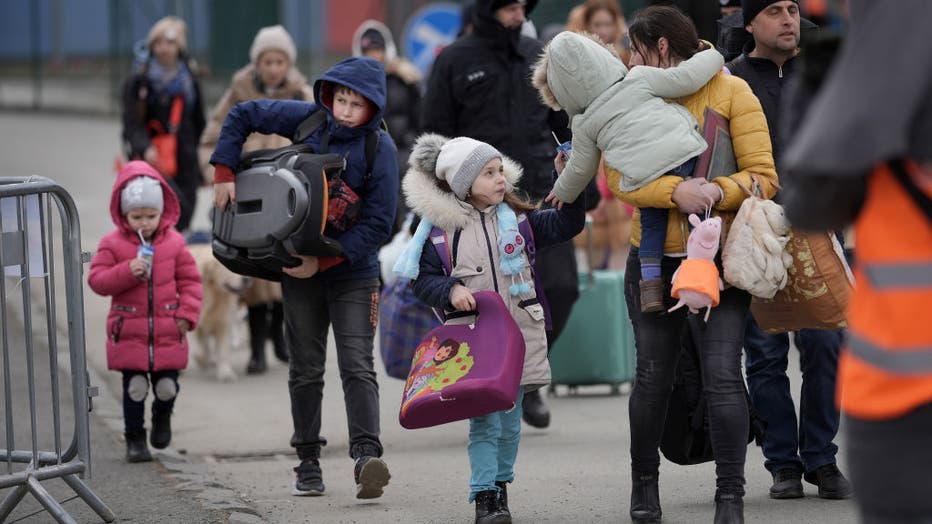 "After the war started in Ukraine, they briefly implemented a waiver that would have allowed Ukrainians, and only Ukrainians, an exemption from this Title 42, and let them come into the United States," explained Natalie Nanasi, associate law professor at SMU. "But what they're saying is, once this official program starts on Monday, they're not going to allow Ukrainians to come in through the southern border the same way."

To qualify, applicants have to have a sponsor, which could be a family member or organization.

"I worry a little bit that the program is maybe not as generous as it seems on its face because, again, somebody needs a financial sponsor. And it may be hard to connect people in need to the people who have the capacity to provide that sponsorship," Nanasi added.

Iryna Petrus and her daughter, Polina, left her husband in Ukraine, traveling to three countries before landing in Mexico City.

There is video of the two walking across the bridge into Texas from Mexico recently.

Petrus' goal is to come to Dallas.

"There is a Ukrainian community, churches, and a big immigration group of Ukrainians there," Petrus said.

RELATED: Ukrainian refugee making her way to Dallas with her 4-year-old daughter

Catholic Charities Dallas said they have only encountered a handful of Ukrainian families who came from Mexico under the exemption to the Title 42, which is a Trump-era policy that allows the U.S. to turn away asylum seekers from places like Central America and Mexico because of the pandemic.

And there's heated debate over the Biden Administration ending it next month.

Jari Mema, the chief services officer for Catholic Charities Dallas, is preparing for the new plan to resettle refugees from Ukraine.

"We've had a lot of community support so far. So basically, currently, we're just making the list, and we’ve started making a list of all those who are interested in helping for when they do arrive," Mema said. "It's a matter of when the U.S. has agreed to take upwards of 100,000 refugees from Ukraine."

Mema said we eventually will see refugees arrive in cities like Dallas, and they're hiring more staff and lining up host families.

"There will be all kinds of needs that the funding that comes from the government through a resettlement program will not provide for everything," Mema added.

Refugee advocates have criticized the Biden Administration, saying the U.S. should take in more than 100,000 Ukrainians.

There is no set timeline on when we could see more.