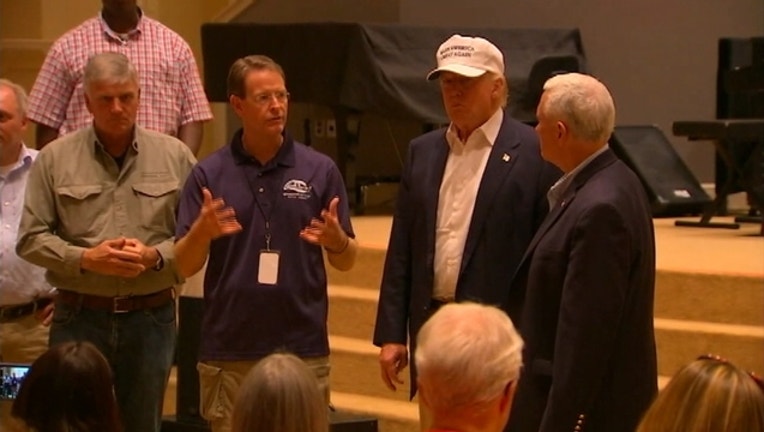 BATON ROUGE, La. (AP) — Donald Trump and his running mate Mike Pence were in Louisiana Friday to survey the flood damage that killed at least 13 people and displaced thousands more.

The visit comes amid an ongoing staff shakeup. Trump's campaign chairman Paul Manafort resigned Friday following revelations about his work for a pro-Russian political party in Ukraine. In a statement, Trump praised Manafort's work on the campaign and called him a "true professional."

Pence arrived in Baton Rouge ahead of Trump Friday, where he met with Louisiana's most senior Republican officials. Louisiana Gov. John Bel Edwards, a Democrat, says he won't be involved in Trump's visit.

A torrent of about 2 feet of rain inundated the southern part of the state, devastating areas hit hard by Hurricane Katrina over a decade ago.

Trump said this week he's overhauling his campaign operation, bringing in a new chief executive and appointing a new campaign manager. Trump's decision to tap Stephen Bannon, a combative conservative media executive, as his new campaign chief suggested to some that he might continue the divisive rhetoric that has angered minorities and alienated large swaths of the general election electorate.

His trip to Louisiana, a rare departure for the candidate whose campaign so far has consisted largely of mass rallies and television phone-ins, comes a day after he made a rare expression of remorse for making comments that "may have caused personal pain."

In a highly uncharacteristic move at a rally in North Carolina on Thursday night, Trump said for the first time that he regrets some of the caustic comments he's made in "the heat of debate."

"Sometimes in the heat of debate and speaking on a multitude of issues, you don't choose the right words or you say the wrong thing. I have done that," the GOP nominee, reading from prepared text, said at a rally in Charlotte, N.C. Thursday night. "And believe it or not, I regret it — and I do regret it — particularly where it may have caused personal pain."

It was a rare admission for a man who has said that he prefers "not to regret anything" and it underscored the dire situation Trump finds himself in. With just 80 days left until the election, Trump is trailing Democratic rival Hillary Clinton in preference polls of most key battleground states. At the same time, party leaders have conceded they may divert resources away from the presidential contest in favor of vulnerable Senate and House candidates if things don't improve.

Earlier Thursday, Trump moved to invest nearly $5 million in battleground state advertising to address daunting challenges in the states that will make or break his White House ambitions. While his rival Hillary Clinton has spent more than $75 million on advertising in 10 states since locking up her party's nomination, Trump's new investment marks his first of the general election season.

Trump's first general election TV ad contrasts his strict approach to immigration with what he calls Clinton's plan to do "more of the same, only worse."

"In Hillary Clinton's America, the system stays rigged against Americans," it begins.

Trump's decision to visit Louisiana came after the White House said President Barack Obama was unlikely to break from a New England vacation to survey the damage, despite calls for him to visit and meet with responders and victims.

In an editorial published Wednesday, The Advocate newspaper in Baton Rouge called on Obama to visit "the most anguished state in the union." The newspaper noted that Obama interrupted his two-week vacation on Martha's Vineyard earlier this week to attend a fundraiser for Democratic presidential nominee Hillary Clinton on the Massachusetts island.

However, Trump's decision to tour the flood-ravaged areas was met with harsh words from Edwards.

"We welcome him to LA, but not for a photo-op," said his spokesman Richard Carbo in a statement. "Instead, we hope he'll consider volunteering or making a sizable donation to the LA Flood Relief Fund to help the victims of this storm. "

Edwards meanwhile, defending the administration's response Thursday, saying he has spoken daily with the White House and would prefer Obama hold off on visiting because such stops pull local police and first responders into providing security.

Trump's new campaign manager Kellyanne Conway suggested that the visit was part of a larger effort, like his speech on Thursday, to pivot to a more presidential phase.

"It's also presidential today to have him and Governor Pence going to Louisiana in a decidedly nonpolitical event," she told ABC's Good Morning America Friday," adding that they would be "going to help people on the ground who are in need."