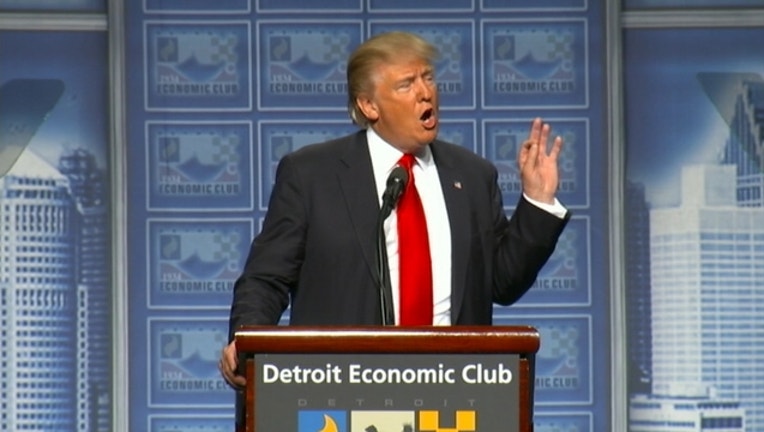 With a speech Monday to the Detroit Economic Club, the Republican presidential nominee seeks to reset his campaign and delve into a subject — the economy — that is seen as one of his strengths. It also is aimed at showing that he is a serious candidate despite a disastrous stretch that has prompted criticism from Republicans and Democrats alike.

Trump has been immersed in controversy over his repeated criticism of a Muslim-American family whose son, an Army captain, was killed in Iraq, and his refusal for days to endorse House Speaker Paul Ryan in Tuesday's Wisconsin primary. He announced his backing of Ryan on Friday.

While polls have shown that voters have deep concerns about Trump's temperament and fitness for office, he fares better on the economy. On that topic, recent polling puts him ahead of or on par with Hillary Clinton.

The Democratic nominee is also focusing on the economy this week as she lays out plans for what her campaign describes as "the biggest investment in good-paying jobs since World War II." Clinton has argued that Trump is focused only on the wealthiest Americans. She has questioned his commitment to creating U.S. jobs, given the history of outsourcing at his companies.

On Monday, Clinton will visit the battleground state of Florida, where she will tour a small brewery and hold two rallies. On Thursday, she is set to deliver her own economic speech in Detroit, a city that has symbolized the nation's manufacturing plight.

When Trump speaks in Detroit, he is expected to reiterate his plan for reducing income taxes, as well as lowering the corporate tax rate to 15 percent from the current 35 percent in an effort to spur new investment. He is also calling for eliminating the estate tax and a temporary moratorium on new regulations.

Among his specific proposals will be allowing parents to fully deduct the cost of childcare from their taxable income. The current Child and Dependent Care tax credit is capped at 35 percent of qualifying expenses or up to $3,000 for one cared-for individual or $6,000 for two or more.

Child care is one of the largest expenses a family can incur, with day care costs surpassing college in many states. Trump's proposal to allow families to avoid paying taxes on child care expenses would likely help more affluent households because more than 40 percent of taxpayers don't make enough money to owe taxes to the federal government at the end of the year.

A senior campaign aide said that the proposal would be aimed at working and middle class families and that it would include an income limit, though the person declined to say how much. The person spoke on condition of anonymity to discuss details ahead of the speech's delivery.

Government aid for child care has traditionally been a Democratic issue, and Clinton has made making childcare more affordable a centerpiece of her campaign. She has proposed capping families' expenditures at 10 percent of a family's income, in addition to making four-year-old preschool available to all kids and to providing 12 weeks of paid family leave to help new parents.

Trump also is expected to call again for boosting domestic energy production — a plan his campaign estimates can add $6 trillion in local, state and federal revenue over four decades.

An economic adviser to the campaign, Stephen Moore, who helped work on the speech, said Trump's policies were aimed at boosting economic growth to bolster middle-class workers, whose wages have stagnated for decades. The annual growth rate of the economy was just 1.2 percent from April to June, below what economists had expected.

"We need much, much faster growth if we're going to have wages rising and salaries rising and middle-class incomes rising," he said. "How do we get back to a healthy rate of economic growth which we haven't had in a decade?"

Trump will also revisit his opposition to current trade deals, including his plan to renegotiate the NAFTA trade agreement with Canada and Mexico, and vow to improve intellectual property protections.

Trump campaign chair Paul Manafort said Sunday on Fox News Channel that with the speech, "we're comfortable that we can get the agenda and the narrative of the campaign back on where it belongs, which is comparing the tepid economy under Obama and Clinton, versus the kind of growth economy that Mr. Trump wants to build."

This won't be the first time Trump lays out his economic vision. He first unveiled his tax plan last fall, framing it as a boon to the middle class. "It's going to cost me a fortune," the billionaire businessman told reporters as he vowed to lower taxes across the board without exploding the deficit.

But a host of independent groups crunching the numbers soon concluded otherwise. The plan, they said, dramatically favored the wealthy over the middle class and would increase the debt by as much as $10 trillion over the next decade.