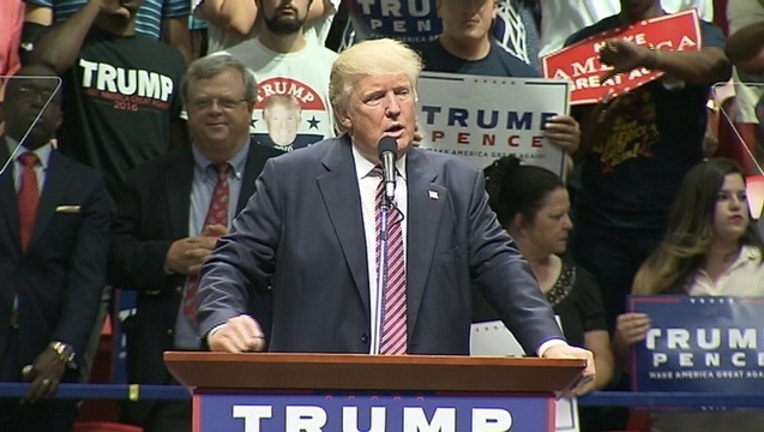 WASHINGTON (AP) — Donald Trump says he'll deliver a detailed speech on his proposal to crack down on illegal immigration on Wednesday in Arizona — but it's anyone's guess what he might say.

The announcement came late Sunday in a tweet by the GOP presidential nominee after days of wavering — and at least one canceled speech — on a question central to his campaign: Whether he would, as he said in November, use a "deportation force" to eject the estimated 11 million people in the U.S. illegally. On Sunday, led by vice presidential running mate Mike Pence, Trump's surrogates fanned out across the televised talk shows to reiterate other parts of his proposal but none could answer that question. And they wouldn't say whether it was worrisome that such a consequential proposal remained unclear so close to the Nov. 8 election.

In one case, the chairman of the Republican National Committee refused to speak for the GOP nominee at all.

It was a striking look at Trump's leadership of a team he had said would help drive him to victory against Democrat Hillary Clinton.

The very purpose of surrogates is to speak for and back up their presidential nominee. But Trump's stand-ins struggled to do so even as they stayed tightly together on the details they know: Trump will issue more details on the immigration plan soon, the policy will be humane, and despite his clear wavering, he's been "consistent" on the issue. Any discussion of inconsistencies or potentially non-presidential tweeting, Pence and others suggested, reflected media focus on the wrong issue.

Trump's tweet Sunday suggested he was poised to clear up those questions.

Trump's campaign also announced on Sunday a $10 million-plus buy for ads to air in nine competitive states starting Monday. And late Sunday, the nation's only African-American owned and operated national Christian television network announced that its president and CEO, Bishop Wayne T. Jackson, would interview the Republican nominee in Detroit on Sept. 3.

It's been a long and sometimes puzzling journey to this point for the GOP nominee, who defeated 16 Republican opponents while promising to be the toughest on illegal immigration. Trump even questioned whether people born in the United States to people here illegally are citizens — even though they have automatically been considered citizens since the adoption of the 14th Amendment in 1868.

But lately, he's been exploring the issue's complexities in public.

On Fox News Channel's "Hannity" show, he discussed how hard it is to break up families. He suggested that maybe people who've been in this country for years should be allowed to stay if they pay back taxes. He insisted that such a plan would not amount to the "amnesty" that's anathema to many core supporters of the Republican Party.

Trump in recent days has suggested he might be "softening" on the deportation force and that he might be open to allowing at least some immigrants in the country illegally to stay, as long as they pay taxes.

But by Thursday, he was ruling out any kind of legal status — "unless they leave the country and come back," he told CNN.

Trump has focused lately on deporting people who are in the U.S. illegally and who have committed crimes. But who Trump considers a criminal remained unclear Sunday.

"Those are the things that Donald Trump is going to answer. And this is not a simple question," said Priebus, who's had a difficult relationship with Trump.

The speech has been rescheduled at least once. Trump's campaign had scheduled it for last Thursday, then canceled it. The campaign also blamed staff error for reports that it had been scheduled for August 31 in Phoenix. But Trump's tweet late Sunday made clear that the event is back on.

But it's far from clear what he'll say, apparently even to his top supporters.

Asked whether the "deportation force" proposal Trump laid out in November is still in place, Pence replied: "Well, what you heard him describe there, in his usual plainspoken, American way, was a mechanism, not a policy."

Added Trump's campaign manager, Kellyanne Conway: "The softening is more approach than policy," adding that on immigration, Trump "wants to find a fair and humane way."

Pence, Conway and other surrogates said the main tenets of Trump's immigration plan still will include building a wall along the southern U.S. border and making Mexico pay for it, no path to legalization or citizenship for people here illegally and stronger border enforcement. Pence also did not answer whether the campaign believes, as Trump has said, that children born to people who are in the U.S. illegally are not U.S. citizens. That, he said, "is a subject for the future."

Pence appeared on CNN's "State of the Union," Priebus was on NBC's "Meet the Press," and Conway was on "Fox News Sunday" and CBS' "Face the Nation."