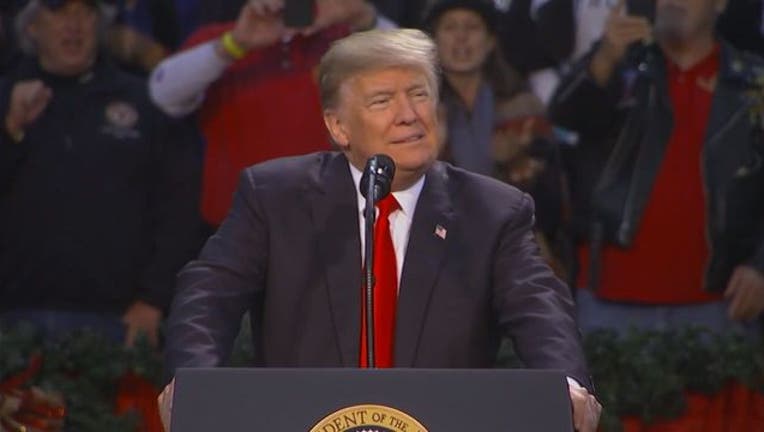 Trump on Tuesday called news the FBI was missing five months' worth of texts from the agent, Peter Strzok, "one of the biggest stories in a long time." Strzok was removed from Mueller's team following the discovery of anti-Trump text messages exchanged with an FBI lawyer.

The Justice Department last month produced for reporters and Congress hundreds of text messages that Strzok and lawyer Lisa Page had traded before becoming part of the Mueller investigation. Many focused on their observations of the 2016 election and included discussions in often colorful language of their personal feelings about Trump, Clinton and other public figures.

On Friday, the FBI released additional text messages to Congress and told lawmakers that a technical system glitch caused messages between December 2016 and May 2017 to not have been properly stored. The Justice Department is seeking to recover the messages.

Wisconsin Sen. Ron Johnson, the Republican chairman of the Senate Homeland Security and Governmental Affairs Committee, revealed some of the new texts over the weekend in a letter to FBI Director Christopher Wray. The texts released by Johnson involve discussions of the investigation into Hillary Clinton's use of a private email server, including about Attorney General Loretta Lynch's decision to accept the FBI's conclusion in that case and a draft statement that FBI Director James Comey had prepared in anticipation of closing out the Clinton investigation without criminal charges.

On Tuesday, Johnson revealed more of the text exchanges while speaking on a conservative radio show in Wisconsin. In one of the messages, Strzok and Page discuss whether they might be put on Mueller's team after he was appointed.

"You and I both know the odds are nothing," Strzok wrote to Page about Mueller's upcoming investigation into ties between Russia and Trump's Republican presidential campaign. "If I thought it was likely, I'd be there no question. I hesitate in part because of my gut sense and concerned there's no big there there."

Johnson said on the show that he thinks the text is "shocking."

Strzok, a veteran counterintelligence agent who also worked the Clinton email case, was reassigned last summer. Page was only temporarily on the Mueller team.