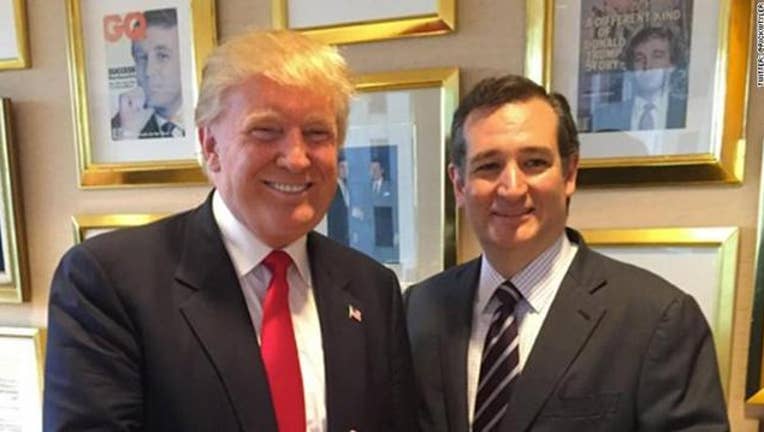 "We are led by very, very stupid people," Trump, the GOP front-runner weighed in, at a midday rally on Capitol Hill. He called the deal "incompetent" and poised to fail in the fight against Islamic militants. "We will have so much winning if I get elected, that you may get bored with winning."

Cruz, who invited Trump to the event, said supporters of the deal will have blood on their hands.

"You cannot wash your hands of that," he said, naming House Speaker John Boehner and Senate Majority Leader Mitch McConnell, both Republicans, as two men who could stand in the way. "Any commander-in-chief worthy of defending this nation should be prepared to stand up on Jan. 20, 2017 and rip to shreds this catastrophic deal."

The pairing at Wednesday's rally, sponsored by tea party and pro-Israel activists, is the product of what Trump acknowledged beforehand as "a little bit of a romance" at this early stage of the 2016 presidential race. In fact, the senator and the real estate developer are competing for many of the same anti-establishment, core Republican activists.

The two spoke outside the Capitol as Congress debated the deal, which is designed to keep Iran from acquiring a nuclear weapon. Republicans and Israel say Iran can't be trusted because its leaders want to annihilate the Jewish state.

In a speech earlier in the day, Democratic presidential contender Hillary Rodham Clinton said the deal was not perfect, but she defended it as a win for diplomacy that "blocks every pathway for Iran to get a bomb." The comments marked a sharp contrast to Cruz and Trump, who lashed out at the agreement over and over without offering specific alternatives.

Both candidates also slammed President Barack Obama's endorsement of the complex deal without negotiating the release of four Americans who remain in captivity in Iran. Trump added this pledge: "If I win the presidency I guarantee you that these four prisoners are back in our country before I ever take office."

Trump did not explain how he would accomplish that goal.

The event highlights the unique relationship between Trump and Cruz, a tea party hero who helped shut the federal government in 2013 and ultimately needs the same frustrated voters who have pushed Trump to a surprising lead in early polls. As Republican competitors turn against Trump, Cruz has offered only praise. The strategy could pay dividends for Cruz in the coming months, if Trump drops out of the race.

Still, Trump assured the group: "I'm not dropping out of anything. I never drop out."

The day gave Trump an opportunity to address foreign policy less than a week after he struggled to answer basic questions about key players in the Middle East during a radio interview. The former reality television star also met with Alabama Sen. Jeff Sessions in the Capitol before leaving Washington, a private meeting largely focused on immigration.

The protest won't change the ultimate approval of the international agreement, which has been clear for days: Even if a disapproval resolution should pass the House and Senate this week, President Barack Obama would veto it, and Democrats have the votes in hand to sustain his veto.

Former Florida Gov. Jeb Bush's campaign released an Instagram video clip on the eve of the rally, using Trump's words against him. Asked in a 2007 CNN interview who he'd like to represent the U.S. in a deal with Iran, Trump responds, "I think Hillary would do a good job."

The agreement struck by Iran, the U.S., China, Russia, France, Britain and Germany in July would provide Iran hundreds of billions of dollars in relief from international sanctions in exchange for a decade of constraints on the country's nuclear program. The deal aims to keep Iran at least a year away from being able to produce enough nuclear material for a weapon.

Meanwhile, the political significance of the Cruz-Trump partnership was not lost on Brad Botwin, a 58-year-old federal government employee who lives in Rockville, Maryland, and listened to the Republican rivals from a shady spot near the back of the rally.

Botwin had slapped a Trump bumper sticker on his Cruz T-shirt to "cover all the bases."

"To me, they're neck and neck because they both have a vision," he said. "Trump has played with the big boys, and Cruz knows the policy and details. In fact, they'd be a great team."