In this week's Trackdown, words exchanged inside an Oak Cliff 7-Eleven ended with a man being chased down and killed.

DALLAS - In this week's Trackdown, words exchanged inside an Oak Cliff 7-Eleven ended with a man being chased down and killed.

Video from the 7-Eleven shows the victim in the store and the shooter outside.

They seem to be having some sort of argument, and it ended with the victim, Terrance McCray, being shot dead.

"For you to leave, and with time elapsed, and you wait for someone to exit a store and give chase and catch them and shot them, I mean, that’s an execution," Dallas PD Detective Derick Chaney said.

That’s how McCray died February 9 after being shot multiple times in an alley. He was chased down after leaving the 7-Eleven at East Illinois Avenue and Corinth Street in East Oak Cliff.

"My victim and the suspect were involved in a verbal altercation that started inside the store. The altercation ended up being a physical altercation at the entryway of the 7-Eleven," the detective explained. 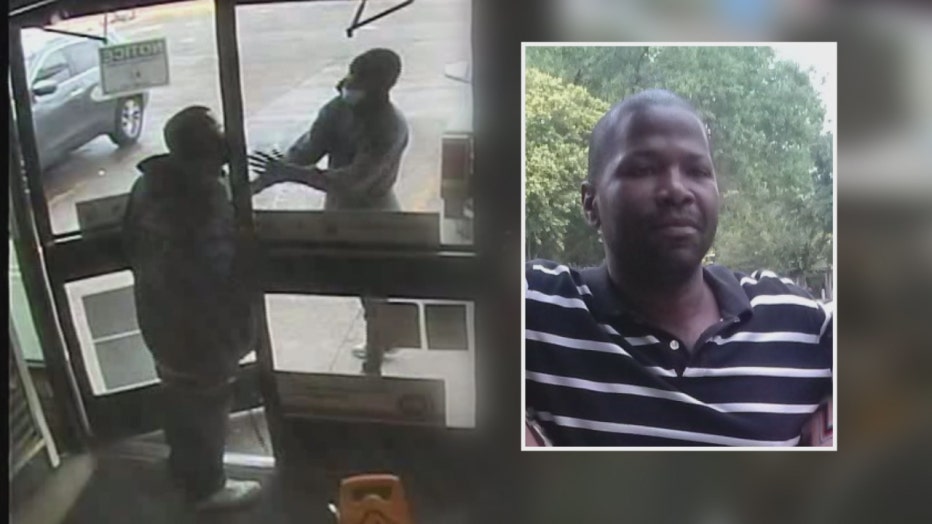 The altercation was caught on tape, as the two men were beefing at the door of the 7-Eleven.

McCray was in the store, while the man who shot him was just outside the business entryway.

"At some point, the suspect pulled a gun, in which the victim was able to hold the door closed to keep the suspect from coming back inside the store," Det. Chaney said.

The store clerk went from behind the counter and tried to shoo McCray out of the store, but he didn’t leave.

Both men seemed angry, and were kicking and swinging at each other, but nothing connected.

Finally, the man outside went across the street to McDonald’s.

"I believe that the suspect is from this area. He arrived here on foot. He didn’t have a car, so he must live somewhere nearby," the detective said.

Det. Chaney said when McCray left the 7-Eleve, the suspect he had the altercation with went after him.

"He chased the victim down to 2916 South Denley Drive, in an alleyway, and shot the victim several times," Chaney said.

And the detective believes someone in the neighborhood knows who the suspect is, who didn't have to shoot an unarmed man.

"But you went as far as shooting him, and not just once, you shot him several times, and now his family is grieving. His daughter is grieving because she doesn’t have her father," Det. Chaney said.

Crime Stoppers is offering a $5,000 reward for the right name in this case.

Help track down the man who killed Terrance McCray.