In this week’s Trackdown, Dallas police have asked for the public’s help to find the killer of a completely innocent man who was murdered during an attempted robbery.

DALLAS - In this week’s Trackdown, Dallas police have asked for the public’s help to find the killer of a completely innocent man who was murdered during an attempted robbery.

Police said the suspect ended up getting nothing, but took everything from Alberto Sarmiento.

Surveillance video shows the killer back on December 30, 2020, which was a rainy cold night in Dallas.

He was carrying a bag of some sort, or fanny pack, which was draped across his shoulder.

The victim had come to Dallas from Guatemala to work as a day laborer, hoping to make a better life, but he lost his life in his apartment complex courtyard.

Detective Tonya McDaniel said the same man who killed Sarmiento robbed someone else before the killing.

"If you know this person, you need to turn them in. Call them out for what they're doing," Det. McDaniel said.

The male suspect is seen on surveillance video walking past, then back in to the Crestridge Apartments, located at 6417 Ridgecrest Drive, at 9:30 p.m. on Dec. 30. 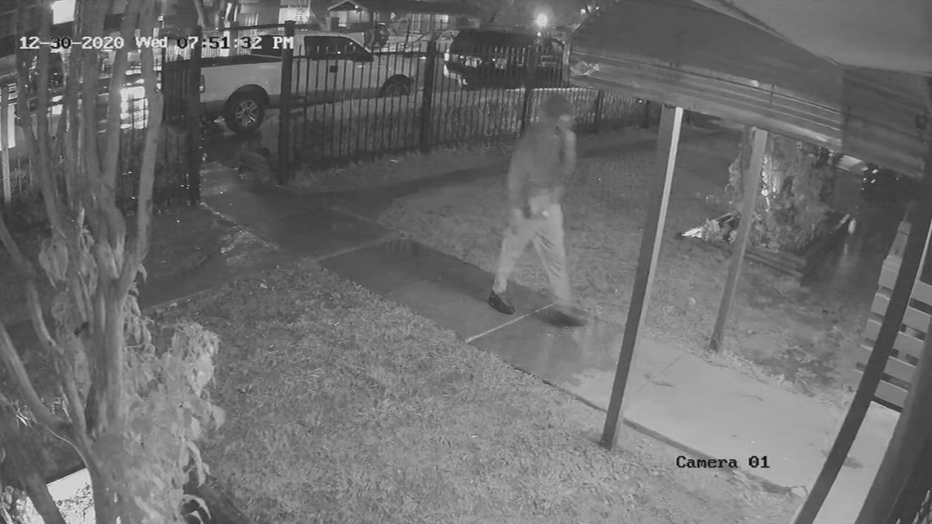 "This guy walks in and he has on what I would call a man-bag or a fanny pack," McDaniel said.

He's in a hoodie and a face mask, along with black tennis shoes, but it’s the man-bag or fanny pack that sticks out.

"He goes in and he lingers around the courtyard, and you tell that he's watching people as they walk through the courtyard area just trying to see who he is going to prey on," the detective said.

It was a rainy night, and when the rain lets up, Sarmiento went to his mailbox. He was walking back to his apartment when he was shot and killed.

"That’s when you see the suspect getting ready to approach Mr. Alberto, who has no clue what is about to happen to him," McDaniel said.

Police said this all happened after the suspect robbed someone else at an apartment complex across the street.

"There was another robbery here across the street at one of the other apartments, where the same suspect fitting the same description robbed another individual," Det. McDaniel said. "Robbed somebody over there before he came here on a rainy day. That’s very important and concerning to me."

The suspect fled on foot, along with that man-bag or fanny pack.

Anyone with information is asked to call or text Det. McDaniel at 469-261-6790 to help find the killer of Alberto Sarmiento.