A look inside Brady’s blinged-out yacht

TAMPA, Fla. - Tom Brady's yacht easily stood out among the rest of the boats in Wednesday's Super Bowl parade. Dubbed "Viva a Vida," the 53-foot yacht is a Wajer 55-S.

"It has more deck space. The ‘S’ stands for sport. It’s lighter. It’s slightly faster than the regular 55 which is more like a cruiser," said Dries Wajer, CEO of Wajer Yachts.

The company was founded by Wajer's father in 1992.

"It is a very high-quality craft that we build in the Netherlands where we have our own shipyard," Wajer explained. "We build about 50 to 60 boats a year."

Star quarterback Tom Brady pulls into the Super Bowl boat parade to say hello to Coach Bruce Arians, who has the Lombardi Trophy.

With three engines pushing around 2,000 horsepower, Brady's boat can hit speeds up to 40 knots. It also has a range of about 400 miles.

"We really want to be the Rolls Royce on the water," Wajer continued.

The Tampa Bay Buccaneers celebrated their Super Bowl win with a boat parade through downtown Tampa as thousands of fans watched on boats and on land.

Expect to pay a couple of million dollars if you want to boat like the 'GOAT.'

"For the 55-S we mainly sell it to younger people who want to take a lot of friends," Wajer said.

In other words, it is perfect for a Tampa-style parade. 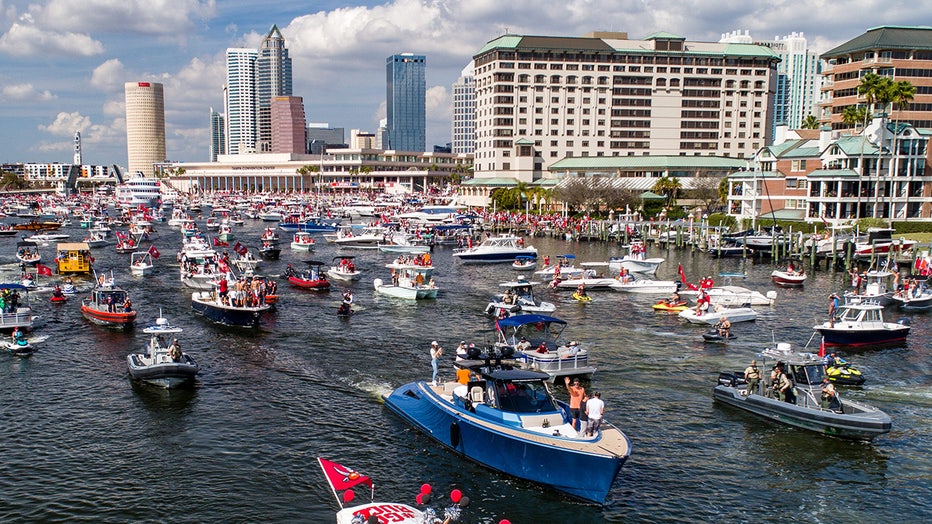 Tom Brady (in orange shirt) waves to fans from his boat (blue, center) on the Hillborough river on February 10, 2021 in Tampa, Florida. (Photo by Julio Aguilar/Getty Images)

"We have been watching it online. For us it’s amazing, we have many nice clients being our ambassadors like Tom and we appreciate that," Wajer told FOX 13.