How did Tiger Woods' crash happen? Stu Mundel from Fox 11 Los Angeles breaks it down

Tiger Wood's is in serious condition following a single-car crash in Rancho Palos Verdes, California. Fox 11's Stu Mundel goes through how this crash may have happened, leading to his SUV ending up on a steep hill. Subscribe to NewsNOW from FOX! https://bit.ly/3lMoziB​​​ Where to watch NewsNOW from FOX: https://www.newsnowfox.com/​​​ Follow us @NewsNOWFOX on Twitter: https://twitter.com/NewsNOWFOX​​​ Raw and unfiltered. Watch a non-stop stream of breaking news, live events and stories across the nation. Limited commentary. No opinion. Experience NewsNOW from FOX.

LOS ANGELES - Tiger Woods was able to greet a 10-year-old soccer athlete battling cancer and give her an inspiring message while he continues to recover from a severe leg injury suffered in a February crash.

Woods and the girl, Luna Perrone, took a picture together in Florida. Luna was at a soccer event when she somehow ran into Woods, and wrote about meeting one of pro golf’s greatest players.

"I got to have a quick chat with @tigerwoods this weekend when I bumped into him at the soccer fields! He told me to ‘stay strong’ which has always been my goal! Stay strong physically and mentally and inspire others to do the same! No matter what you are going through YOU GOT THIS!!!," Luna wrote in a post on her Instagram account on Monday.

Luna is battling Ewing's sarcoma – a rare bone cancer that affects the soft tissue around bones.

Woods has largely avoided the cameras while he recovered from the injuries. He was seen in the photo on crutches with what appeared to be a compression sleeve on his right leg. 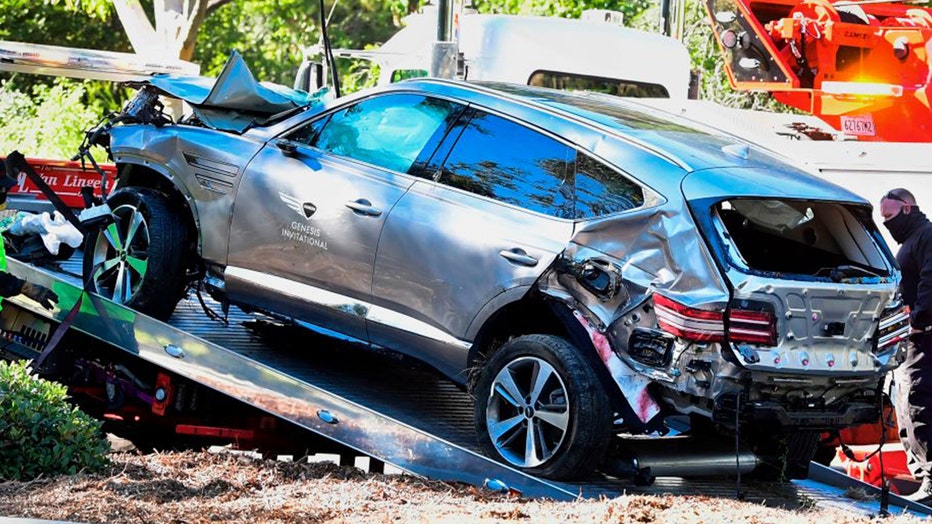 FILE - A tow truck recovers the vehicle driven by golfer Tiger Woods in Rancho Palos Verdes, California, on Feb. 23, 2021, after a rollover accident.

Woods suffered multiple leg injuries, including tibia and fibula fractures, and muscle and soft tissue trauma, in the Feb. 23 crash. Police said Woods was unconscious when first responders arrived at the scene.

Investigators said Woods was speeding before the crash.

Woods had been driving between 84 and 87 mph when he first made impact and about 75 mph when his vehicle hit a tree, officials previously said. The posted speed limit was 45 mph.

He avoided discipline in the crash.

The golf legend has won 15 major championships, has a record-tying 82 PGA Tour victories and is an 11-time PGA "Player of the Year."