Investigators are looking into how the wrong-way driver ended up driving westbound in the eastbound lanes. They are looking at surveillance cameras to see where the driver may have gotten onto I-30 the wrong way.

GRAND PRAIRIE, Texas - A wrong-way driver on I-30 in Grand Prairie collided with a vehicle Friday morning, killing all three people involved and a victim’s dog.

Police say the crash happened on eastbound I-30 near Belt Line Road just before 1 a.m. Friday.

Investigators are looking into how the wrong-way driver ended up driving westbound in the eastbound lanes. They are looking at surveillance cameras to see where the driver may have gotten onto I-30 the wrong way.

For the past six years, 25-year-old Mathew Yang was a familiar friendly face greeting clients at Four Paws Animal Hospital in Rowlett.

As an animal lover, Yang had three dogs of his own. Coworkers described him as a bright light who was fantastic with animals.

"He just exuded that compassion and people, especially in the world right now, need that," said Dr. Lori McKelroy, Yang’s coworker. "And I think he drew people to him."

Yang was driving his girlfriend, 20-year-old Jasmine Huerta, and her dog Mocha home from Tarleton State University early Friday morning when a wrong-way driver going west in the eastbound lanes of I-30 near belt line road collided with them, killing everyone involved.

"Jasmine was as beautiful on the inside as she was on the outside," said Courtney Greer-Rolaff, Huerta’s coworker. "If Mathew had a mirror image, it was Jasmine."

Family, friends, and coworkers got concerned when the couple didn’t make it home and Yang didn’t show up for work the next day. Loved ones quickly distributed missing person posters, looking for answers. 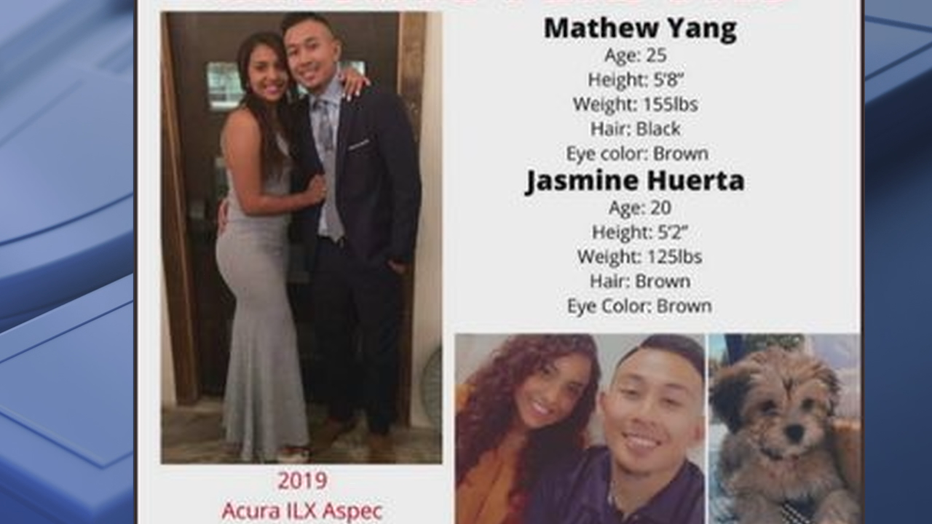 Investigators say there were no brakes applied, and both vehicles’ computer systems were destroyed. So at this point, it’s unknown how fast the vehicles were going.

Police also say toxicology reports could take four to six weeks to find out if any other factors were involved.

"The world has just lost a beautiful person, and we love him," Dr. McKelroy said.

Police say although the vehicles’ computer systems were destroyed, investigators are trying to recover the data. A final report on the crash could take months to complete.