Thousands of North Texans still in the dark, as they’ve had to deal with days of no electricity

While the number of Oncor customers without power is getting smaller, thousands of North Texans are still in the dark.

GRAND PRAIRIE, Texas - While the number of Oncor customers without power is getting smaller, thousands of North Texans are still in the dark.

Families are having to endure a fifth day with no electricity.

As the snow thaws out, many in a Grand Prairie neighborhood are still left to wonder when their lights will come back on.

And the lack of communication from Oncor is proving to be one of the most frustrating things.

"For three nights, we went to bed when it got dark. It was really cold, about 40," Tiffany Weber said.

By Wednesday, they gave up on their power coming back on.

"Finally had to get out. Our son was getting chapped lips and cheeks," Tiffany added.

With no hotels available, the Webers took their 6-year-old son and stayed with friends, who also had relatives staying with them. 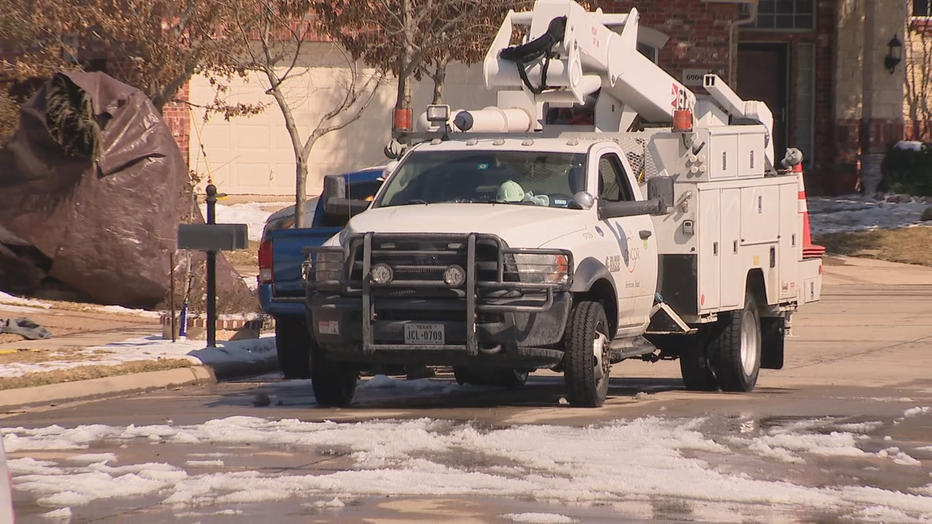 But even after the majority of customers regained power by Wednesday evening, the Webers still could not get answers about why their power was not on.

Then Thursday, there were still no answers.

"After a couple of days, you want to talk to live person. After five days, there’s still no available information, and they hang up on you," Tiffany added.

FOX 4 called Oncor Friday morning to ask about their outage.

A spokeswoman said 42 homes in the Grand Prairie neighborhood were affected by the outage and a crew was already working on the problem, and they would prioritize it.

At noon, there was no sign of any crew in the area, but by around 1 p.m., an Oncor truck arrived.

"Don’t know what we would do if not for kindness of others," Tiffany said.

The Webers said an Oncor worker in their neighborhood said their power may be restored some time Friday night.