Customs and Border Patrol estimates some 12,000 Haitian migrants have now crossed the Rio Grande into the U.S. illegally.

Thousands of migrants have gathered under and around an international bridge in the tiny Texas border town of Del Rio.

The bridge is a major artery that connects Texas and Mexico. The immigrants and asylum seekers have been freely going back and forth between Mexico and Texas across a Rio Grande River dam.

With the majority Haitian, the numbers are great and only growing. The Val Verde County judge said most of the thousands that are gathered under a border bridge are Haitian and made this trip from Central America.

Customs and Border Patrol estimates some 12,000 Haitian migrants have now crossed the Rio Grande into the U.S. illegally. It's unclear how so many amassed so quickly in Del Rio.

The situation is unfolding on the same day Gov. Greg Abbott signed a new bill into law giving the state billions of dollars in border security funding.

"Border security funding is now law in the state of Texas," Gov. Abbott said after signing House Bill 9 into law in Fort Worth.

The divide between the Biden Administration and Gov. Abbott on illegal immigration laws, policy, and enforcement continues to widen.

"It is the federal government’s job to secure our border, but the Biden Administration has failed to do its job," Abbot said.

The divide between the Biden Administration and Gov. Abbott on illegal immigration laws, policy, and enforcement continues to widen.

President Joe Biden has not commented on the Del Rio crisis.

"We are still taking steps or focused on taking steps to address the root causes of migration, implement orderly asylum processes, strengthen collaborative migration management efforts in the region, and effectively secure our borders. we feel we've made considerable progress on that front," White House Press Secretary Jen Psaki said.

New aerials capture the sheer volume of migrants, mostly Haitian, crammed underneath an international bridge in the border city of Del Rio Friday. 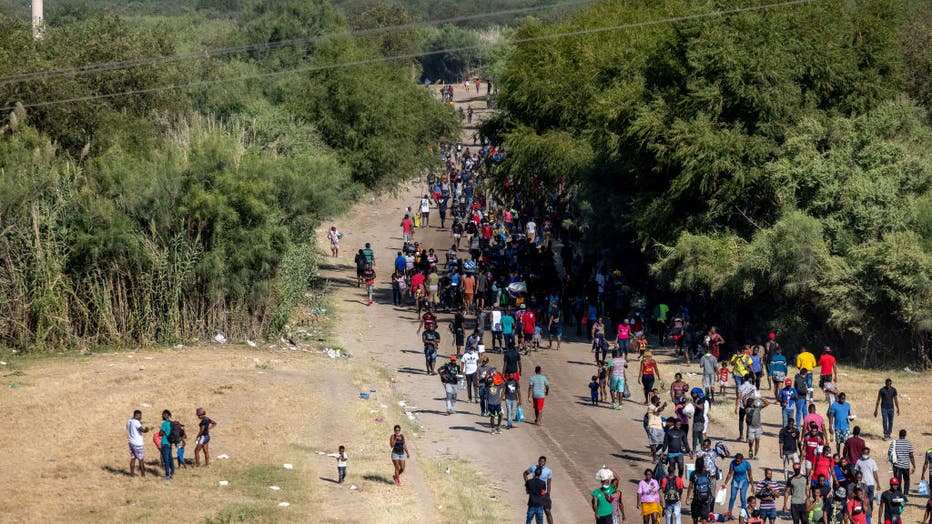 Del Rio's mayor declared a local state of emergency, shutting down toll booths to the bridge crossing into Mexico arguing safety concerns for city workers on the bridge.

"This is beyond crisis," the mayor said. "This is urgent. This is dire."

At the Fort Worth Police Officer's Association office Friday, Gov. Abbott signed HB9 into law. It provides state funding for border security, including money to continue building a wall.

"The people under that bridge right now are going to be re-located by the U.S. Department of Defense," he said.

Abbott says some of the migrants will be taken to federal facilities in Arizona, California and possibly Laredo.

In the meantime, DPS and the Texas National Guard are setting up a perimeter.

"To de-escalate the tension around that bridge. To make sure we keep our state and community safe," Abbott said.

Laura Collins is the director of the Bush Institute-SMU Economic Growth Initiative. She isn't surprised by the influx of Haitians at the border. The small island nation has been hit by two devastating earthquakes. The nation's president was assassinated last month.

"Lot of Haitians have left Haiti in the last decade," she said. "Plus, to try to find their way to new homes. Not just in the United States, but also in South America."

But Collins says a lot of that work in South America dried up.

The pandemic is another major driving factor. And many migrants believe they have a better chance of getting into the U.S. through asylum under the Biden administration.

"The border is really just it's a symptom of an immigration system that doesn't really work on a number of fronts," Collins said.

It’s unclear how quickly the migrants will be relocated by the federal agents.

Abbott said the state signed a contract with companies to oversee the construction of the border wall. He said they will begin working on it soon.