FORT WORTH, Texas - Thousands of people lined up hours early for Thursday’s holiday Mega Mobile Market in Fort Worth.

It’s the first of several the Tarrant Area Food Bank is hosting this month.

Lines of cars stretching around Dickies Arena in Fort Worth as the TAFB and Central Market and HEB gave away more than 9,000 meals in just three hours. 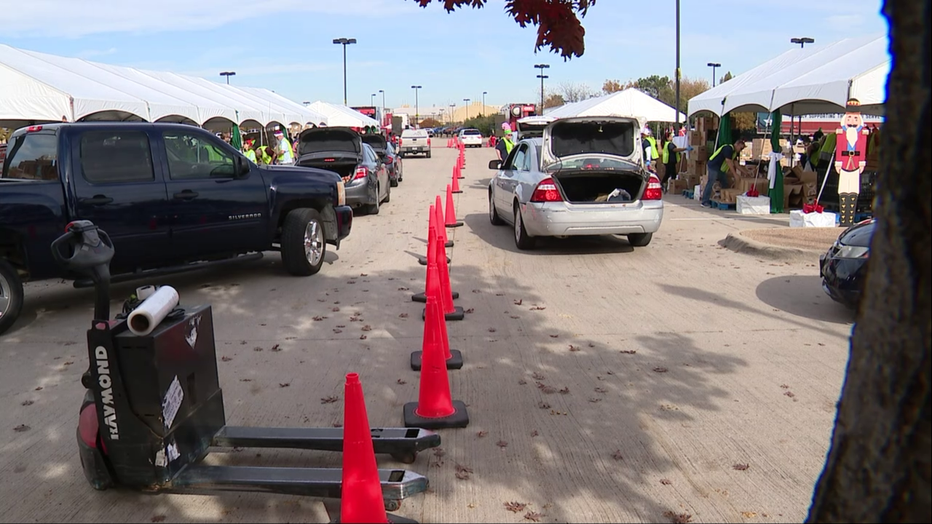 "Hunger does not just happen at the holidays," said Mabrie Jackson with HEB. "We know people are struggling with paying their bills, putting food on the table. They need to feed their growing families."

Many picked up for several other families who couldn’t make it.

Renee Wilson was at the event picking up enough food for three other families.

"The need is great, and it appears the hearts are even greater that someone is reaching out to do this for the community.

Others like Pasquel Procopio planned to give some of the food to his neighbors who are also in need.

"God bless all of you because you’re doing this. It’s very, very good," he said.

Families took home boxes of produce and milk, along with toys for the kids and hot meals for their families.

This year, HEB and Central Market will feed over 300,000 people across Texas in the months of November and December alone, which is more than in previous years.

"This helps 100% this time of year," said Edna Jackson. "Myself, many others, many families have really had difficult times, so this is a blessing."

Event organizers say cars started lining up as early as 7 a.m. hours before the gates opened at 11 a.m.

"I’m glad people know where to go when they’re most in need," Jackson said. "But it is very heartwarming to see the smiles on their face when they know they’re going to go home and fill their pantries."

HEB and Central Market will be partnering with the North Texas Food Bank to host a similar large event next week in Dallas. It takes place on Dec. 10 in Fair Park.