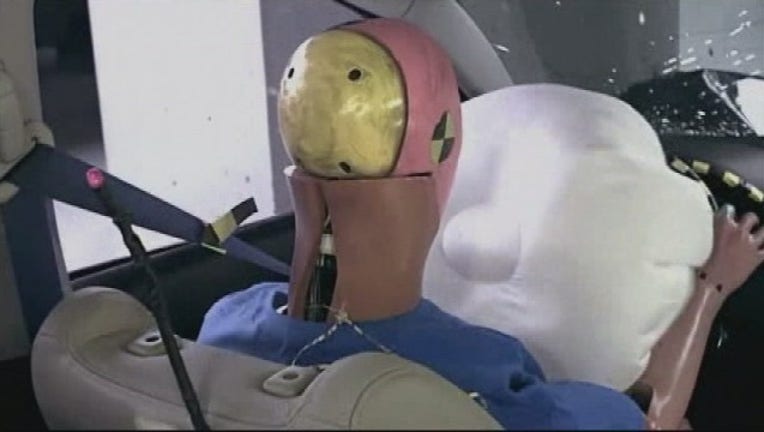 The National Highway Traffic Safety Administration said Wednesday that it's adding up to 40 million air bags to the ongoing recall of 28.8 million air bags made by Japanese supplier Takata Corp. Inflators inside the air bags can explode with too much force and spew shrapnel into the vehicle. They are responsible for at least 11 deaths worldwide and more than 100 injuries.

Here's what you need to know about the recall.

Q. What is wrong with these air bags?

Three independent reports concluded that the chemical Takata uses to ignite its air bags — ammonium nitrate — can degrade after long-term exposure to environmental moisture and high temperatures. If the ammonium nitrate degrades substantially, it can cause the inflators to become over-pressurized and rupture during air bag deployment. In the air bags being recalled, Takata didn't use a chemical desiccant, a drying agent that can counteract the effects of moisture.

Q. How can I find out if my car has been recalled?

A. The federal government has a website (http://www.safercar.gov ) that lets drivers search for open recalls. Owners should input the car's vehicle identification number, or VIN, which can be found on the title or registration card, or on the driver's side dash or door jamb. Cars from the latest recall won't be added to the site for several weeks, so owners should check the site frequently.

The website also has a special Takata page that lists the specific models impacted by the recall.

More models were added Wednesday as part of the expanded recall, which includes mostly passenger-side front air bags. The government didn't provide a list of those models, but said they're being added to the website. Four additional brands — Tesla, Jaguar, Land Rover and Fisker — are also now included in the recalls, for a total of 26 brands.

Q. Which cars are most at risk?

A. The government says vehicles younger than six years old aren't currently at risk of an air bag inflator rupture even if they're in a high humidity region of the country, because it takes time for the ammonium nitrate to degrade. But the risk grows as the vehicle ages.

Q. How long will I have to wait for a replacement?

A. Years, potentially. Only about 8 million of the 28.8 million air bags recalled so far have been replaced, and some of those will have to be replaced again because they are also Takata air bags without a drying agent. Other manufacturers are also supplying replacement air bags.

The expanded recall will take place in phases between May 2016 and December 2019. The phases are based on the age of the vehicles and exposure to high humidity and high temperatures. Owners will be notified when there is a remedy available and should get the repair immediately.

NHTSA chief Mark Rosekind said owners should contact their dealers about the progress of the recall and request a loaner car if they are concerned about their vehicle's safety.

Q. How can I see if a used car has had the recall repair?

Q. Should I disable my air bag while I'm waiting for a repair?

A. No. If you're in a crash, it's far more likely that the air bag will protect you than hurt you. NHTSA estimates that front air bags saved 2,400 lives in 2014 alone.