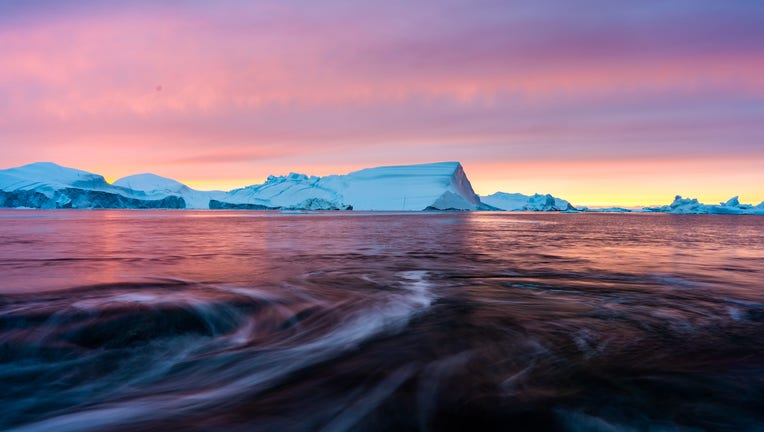 Icebergs near Ilulissat, Greenland. Climate change is having a profound effect in Greenland with glaciers and the Greenland ice cap retreating. (Photo by Ulrik Pedersen/NurPhoto via Getty Images)

A disturbing new report revealed the Arctic is getting hotter so rapidly that it’s looking different every day.

The National Oceanic and Atmospheric Administration released its 2020 Arctic report card, summing up the findings by saying, "The transformation of the Arctic to a warmer, less frozen, and biologically changed region is well underway."

"The Arctic of yesterday is different from today, and the Arctic of today is not predictive of tomorrow," the report also said.

Scientists pointed to the change in air temperatures and sea ice as evidence of the disturbing trend.

Between October 2019 and September 2020, researchers said the surface air temperature rose 3.4 degrees Fahrenheit above average, the second-highest on record since at least 1900.

Sea ice in spring 2020 also dropped to record low levels in the Laptev Sea region off the coast of Northern Siberia and overall sea ice in the Arctic continues to decline.

Scientists also pointed to the wildfires in 2020 in Sakha Republic in Russia as another example of extreme warm spring and summer air temperatures in the Eurasian Arctic above the European and Asian continents. The Greenland ice sheet also showed ice loss between September 2019 through June 2020, as well as other glaciers and ice sheets outside Greenland such as in Alaska and Canada.

The NOAA said it’s not impossible to stop the trend. Scientists said Earth’s temperature could stabilize if "all human emissions of heat-trapping gases were to stop today." Heat-trapping gases include greenhouse gases such as carbon dioxide, methane and nitrous oxide.

RELATED: Under Biden, world leaders hope for renewed US cooperation

"With no further human influence, natural processes would begin to slowly remove the excess carbon dioxide from the atmosphere, and global temperatures would gradually begin to decline," the report added.

The report’s authors said they first noticed the Arctic was clearly changing in 2006 but didn’t comprehend just yet the rapid pace.