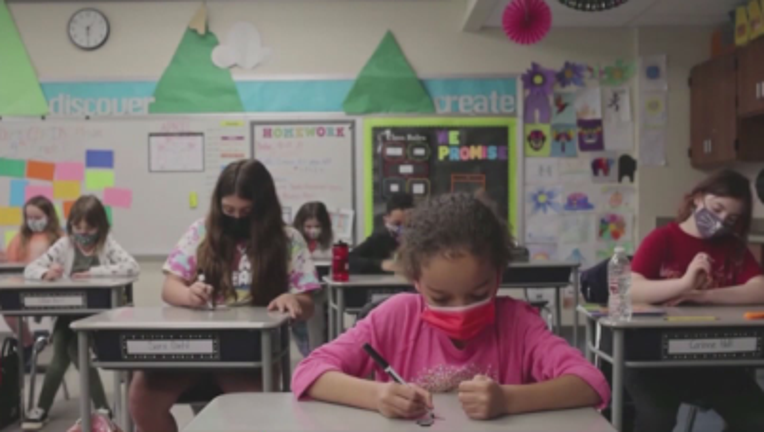 HOUSTON - Some of the 15 Texas school districts that have been sued in the past week for defying Republican Gov. Greg Abbott's ban on mask mandates are pushing back against the lawsuits.

One school district said Wednesday that it doesn't have such a mandate and isn't sure why it's being sued, while another said the lawsuit against it was filed in a "cowardly manner."

"There will be more to come as lawlessness continues across the state," Paxton tweeted Tuesday, when he filed suit against nine districts.

At least eight counties and cities and 87 school districts or systems in Texas have imposed mask mandates to slow the spread of the surging coronavirus, which has overwhelmed many of the state's hospitals.

A federal lawsuit has also been filed by Disability Rights Texas, an advocacy organization. A federal judge on Wednesday denied the group's request for a temporary restraining order to stop the state from preventing school districts from requiring masks.

Last month, the Texas Supreme Court temporarily blocked a mask mandate issued by San Antonio and Bexar County for their public schools. The court has yet to make a definitive ruling on the issue.

Abbott has argued that a law known as the Texas Disaster Act gives him broad power in deciding how best to respond to emergency situations, including whether to ban mask mandates during a pandemic. In a July executive order, Abbott reaffirmed his ban on mask mandates by any state, county or local government entity, saying wearing a mask is a matter of personal responsibility and shouldn't be imposed by the state.

The counties, cities and school districts say Abbott has exceeded his authority.

The Texas Education Agency has said Abbott's ban on mask mandates is not being enforced during the ongoing lawsuits.

Lawyers for Paxton's office have said that neither Abbott's office nor the attorney general have the authority to enforce the governor's ban. Such enforcement would be up to local district attorneys.

The school district in the Central Texas city of Midway, which is among those Paxton's office is suing, said it has tried telling his office that it's not requiring masks.

"We have respected the governor's orders while implementing thoughtful, measured and temporary responses to clusters of COVID cases," district spokeswoman Traci Marlin said in a statement.

When COVID-19 cases get high in the Midway district, officials have created an option for a 10-day mask directive to prevent campus closures.

"We use the word directive instead of mandate because it is literally not a mandate, as in it is not enforced," Marlin said.

Paxton's office has also sued the district in Paris, in northeastern Texas, which in August amended its dress code to require that masks be part of what students wear. During a court hearing Monday, a judge granted Paxton's request for a temporary restraining order to stop the district's mask requirement.

Dennis Eichelbaum, an attorney for the Paris school district, said the district was not informed about the lawsuit or Monday's hearing until two hours after the hearing was over.

"We weren't surprised by the lawsuit. But we were shocked at the cowardly manner in which it was filed," Eichelbaum said.

Paxton's office did not immediately respond to an email seeking comment Wednesday.

The Paris district believes the Texas Education Code gives its board of trustees the exclusive authority to govern its schools, including overseeing the dress code, and that Abbott's executive order did not suspend the education code, Eichelbaum said.

Since requiring masks, the Paris district has had among the state's fewest COVID-19 absences of any district, Eichelbaum said.

"We're hoping that God willing, our numbers don't start going up now that the attorney general has successfully gone into court without us and gotten an order prohibiting us from protecting our faculty and our students" he said.