The Texas Rangers are now responding to some of the criticism over Monday's home opener with a near-capacity crowd. That included the Tarrant County public health director.

ARLINGTON, Texas - The Texas Rangers say the crowds at Tuesday and Wednesday's games in Arlington were less than 50% capacity.

They’re now responding to some of the criticism over Monday's home opener with a near-capacity crowd. That included the Tarrant County public health director.

The Texas Rangers say they are following state guidelines while allowing more fans at games than other pro sports teams have during the pandemic. And despite criticism this week, they're sticking to the plan they announced last month. 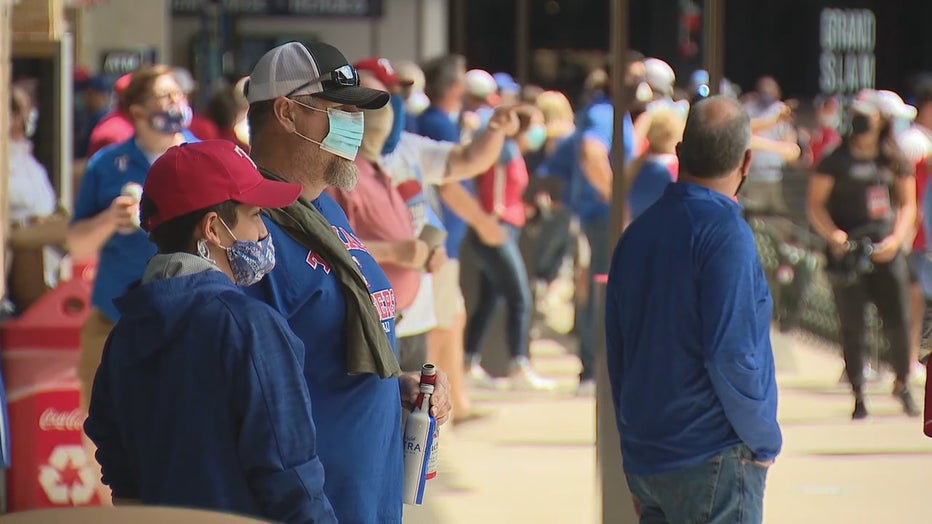 It’s a big week for the Texas Rangers and their fans.

After going fan-less during the inaugural season at the new ballpark, Wednesday's matchup with the Toronto Blue Jays was the final game of their first homestand at Globe Life Field with fans in the stands.

Monday’s season opener with Blue Jays was the first pro sports event to operate at near capacity during the pandemic. More than 38,000 fans attended.

Before the opener, President Joe Biden criticized the Rangers for capacity decision.

The Rangers responded to the criticism with a statement saying the team is "going significantly beyond the guidance from the state." They require masks, have a physical distancing plan for concourses and restrooms, cashless transactions and enhanced sanitation of high-touch areas.

"There weren’t a lot of people around," said Chris Schu. "And in the main walkways, people had masks on."

But others who attended Wednesday’s game admit not all of the crowd was following the rules to a T.

"Everybody was social distancing," said Lisa Ottensmeier. "I mean not as much as we should still be doing, I don't think."

"The worry is that it could lead to a surge because you put 40,000 people in one spot," Taneja said. "Invariably, somebody is gonna get COVID. That’s just a given cause it’s out in the community."

The Rangers also point out the stadium has a state-of-the-art ventilation system and that they’ll play with the roof open as weather permits.