They want to see the mandate that requires masks on planes and other public transportation nationwide repealed.

The lawsuit was filed in the United States District Court in Fort Worth.

Given the nature of the case, any decision will likely be appealed to the conservative Fifth Circuit Court of Appeals, and could possibly end up before the U.S. Supreme Court.

The federal mandate is set to expire on March 18. 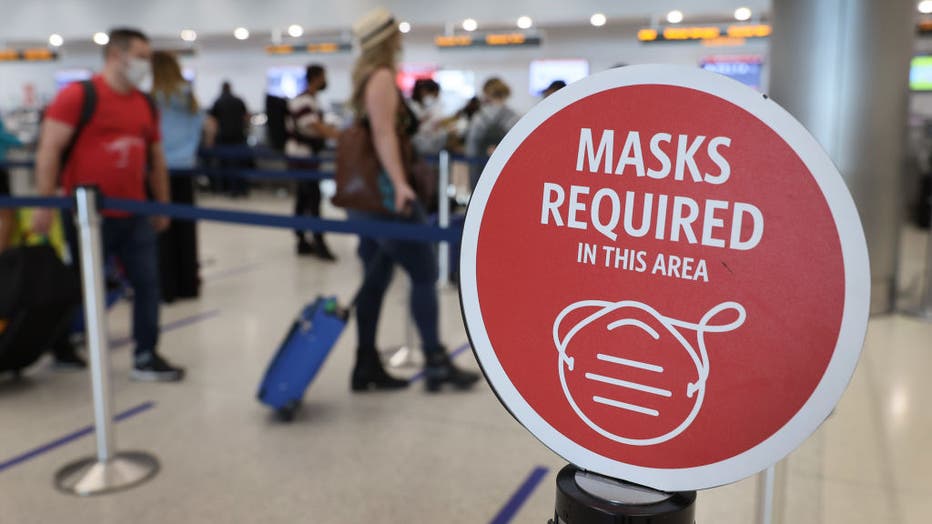 A sign reading, 'masks required in this area,' is seen as travelers prepare to check-in for their Delta Airlines flight at the Miami International Airport on February 01, 2021 in Miami, Florida. (Photo by Joe Raedle/Getty Images)

Van Duyne joined conservative activists with the Texas Public Policy Foundation and AG Paxton in suing the Centers for Disease Control to end the enforcement of federal mask mandates on planes and at airports.

In a tweet Wednesday, Paxton said "masks on planes are not only silly, but illegal too."

"The argument here is that the CDC has certain powers given by federal law, given by Congress to it, and that what it has done in the area of airport safety, and specifically that mask requirements, goes beyond those boundaries," constitutional law attorney David Coale explained.

Coale is not involved in this case.

The plaintiffs argue that by exercising such broad authority, the CDC violates the separation of powers and is abusing its oversight.

"It's hard to evaluate in this context because the CDC is, of course, not the only agency that regulates airports. The FAA and the TSA also have jurisdiction over airports," he added.

A day after the lawsuit was filed in Fort Worth district court, the FAA announced it has forwarded 80 new cases of air rage incidents to the FBI for possible prosecution.

Those 80 cases are the most severe incidents of unruly passengers.

There have been many more, almost 6,500 reports since early last year, and in that broad category, many of the incidents involved passengers refusing to wear masks.

Casanova is a member of the Texas Medical Association's COVID-19 Task Force Team.

He said that while the number of new COVID-19 cases and hospitalizations are going down, we're still not in clear.

He believes masks should still be used on planes.

"In a closed airplane cabin, masks are still a very important part of mitigation," he said. "There is nowhere to go once the wheels lift off the runway. So I think there are areas that we need to continue to lean and rely on science, public health officials, physicians to make public health decisions."

A spokesman with the Association of Professional Flight Attendants said it will continue to support enhanced safety protocols, including masking, as directed by public health officials to ensure that air transportation remains safe and airline recovery continues.