Law enforcement officials say for the last three years in Texas, fake paper tags on cars have become a widespread issue. Criminals have also used them on cars while committing violent crimes. The problem has been a concern in North Texas as well.

Car dealers typically provide the temporary license plates to car buyers, but some fraudulent dealers had been producing and selling them illegally.

The DMV says it has cracked down on the temporary tag system, and more improvements are coming.

In a transportation committee meeting, the new head of the Texas DMV told lawmakers the production of fake temporary tags has greatly declined but admits more needs to be done.

Criminals have also used them on cars while committing violent crimes.

The problem has been a concern in North Texas as well. 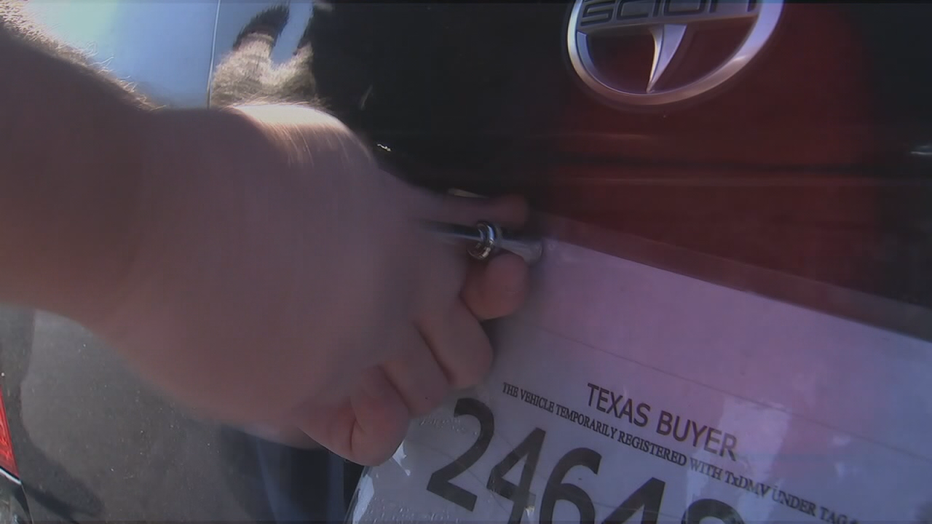 Floyd Goodwin is with the Texas Department of Public Safety.

Last year, lawmakers passed a bill that was signed into law that gives the DMV more power to make changes.

"It took them almost seven to eight months to do anything with the tools we gave them," said Rep. Terry Canales, the committee chair. "So the question is why? Why so long?"

"I share your frustration," Avitia said. "At the time we were awarded HB 3927, I was not in charge, and I could not lead those. But should we have acted faster? Absolutely."

Avitia says since the implementation of new rules, the department has been able to automatically shut down access to dealers suspected of fraud.

The agency will soon take things a step further by requiring the more than 26,000 Texas dealer licensee's to be fingerprinted.

"Fingerprinting applicants should address more than 90% of the issues and challenges we are seeing in abuse to the systems," Avitia said.

Whitney Brewster led the Texas DMV for nearly a decade before resigning in February amid mounting pressure over fake tags.

The Dallas Police Department says it has issued 50 citations this year for unauthorized tags and 57 citations for wrong plates.

Harris County officials say in 2021 there were more than 6,000 crimes with vehicles that had fake paper tags.

Tuesday, Harris County Judge Lina Hidalgo said in the last five years, the county has missed out on millions in revenue because of the issue.

"They may have accounted for more than $80 million dollars in lost revenue in Harris County in terms of toll road revenue, new title and registration fees," Hidalgo said.

The DMV has not announced when it will start fingerprinting dealers.

The agency is also exploring adding QR codes and stickers to the paper tag in the future.