The group of legislators is calling on Texas to join the global fight for democracy through leveraging the world's ninth-largest economy to support Ukraine in the wake of the unprovoked invasion by Russia.

DALLAS - Texas lawmakers talked Wednesday about the repercussions of the war in Ukraine, with state sanctions and help for European allies on the table.

"We’ve got to do something," said State Rep. Angie Chen Button (R- Dallas).

The group of legislators is calling on Texas to join the global fight for democracy through leveraging the world's ninth-largest economy to support Ukraine in the wake of the unprovoked invasion by Russia.

"We will continue to investigate and look for any and all ties associated where we have supported Russian entities," said State Rep. Tan Parker (R – Denton). 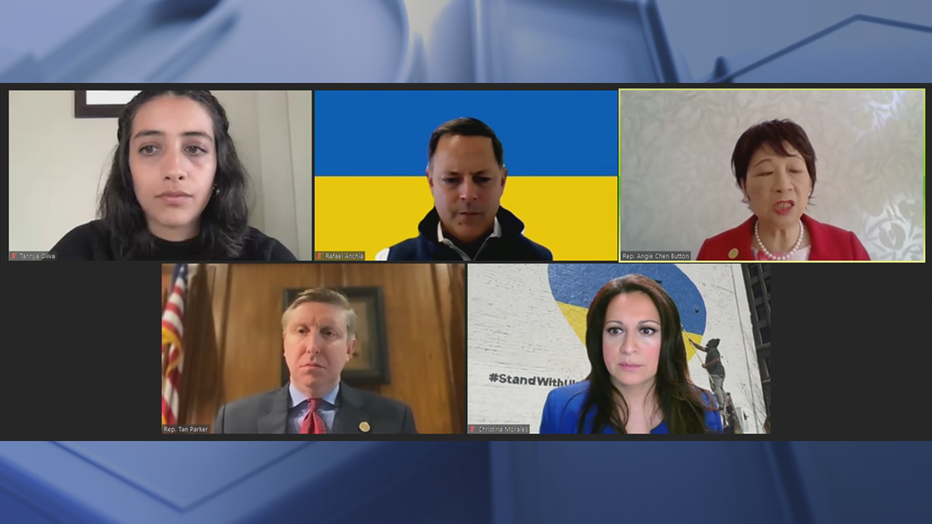 He says, so far, an estimated $650 million worth of investments tied to Russia have been linked to various state pension plans.

The state lawmakers are proposing a two-step plan. The first is to build bipartisan support in the Texas Legislature ahead of the next session. The second, is to draft a bill outline state sanctions.

"That is based on the sanctions regime we imposed on global pariahs in Iran, governments in Sudan, for their respective aggressions," said State Rep. Rafael Anchia (D – Dallas).

Then there's oil and gas.

Texas energy assets are already filling the void during this crisis through the increased export of liquefied natural gas overseas.

"Texas can play a huge role in protecting our allies in Europe and making up for this loss of Russian gas," Parker said.

Some of the lawmakers said they want to dramatically increase production specifically for European markets.

He says there's benefits to the idea -- both for Texas and abroad.

"As we have beefed up our oil and gas production over the past year, that's been good for the state's economy in terms of creating jobs and tax revenue for the state and for local governments," Weinstein said. "So all of this is good for the Texas economy and it's good for Texas politicians. But I think the best thing Texas can do to help the Ukrainians is to sell more oil and gas to Europe."

Weinstein says there are gradual increases in production and the United States is now exporting about 25 percent of its total natural gas production.