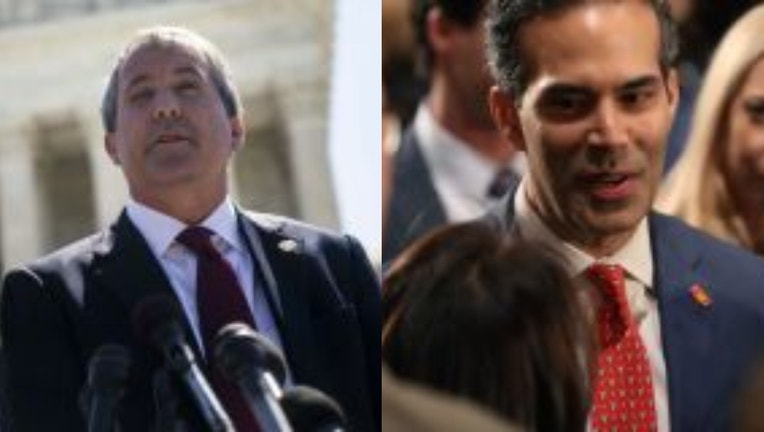 "Enough is enough, Ken," Bush said during a campaign kickoff at a downtown Austin bar. "You've brought way too much scandal and too little integrity to this office. And as a career politician for 20 years, it's time for you to go."

The 2022 matchup could be the marquee statewide primary of this election cycle, and former President Donald Trump already looms large. He said in a statement last week that he would issue an endorsement in the race — and do so "in the not-so-distant future." Bush told reporters after his announcement that he has asked Trump for his endorsement.

Both Bush and Paxton have histories with Trump. Bush — son of former Florida Gov. Jeb Bush — was the only prominent member of his famous political family to support Trump in 2016, and Trump has praised him as the only Bush "that got it right." Paxton has positioned himself as one of the most pro-Trump attorneys general — especially after the November election, when Paxton led an unsuccessful lawsuit challenging Trump's reelection loss in four battleground states.

Paxton's campaign responded to Bush's launch by touting the attorney general as the "tip of the spear in protecting President Trump’s America First principles."

Paxton has been under indictment on securities fraud charges for most of the time since he took office in 2015. More recently, he has come under investigation by the FBI over allegations from former senior aides that he abused his office to help a wealthy donor. He has denied wrongdoing in both cases.

On Tuesday, Paxton asked a state appeals court to dismiss a whistleblower lawsuit brought by the former aides. His lawyers argue that under state law, a whistleblower must believe someone has violated the law, but the aides only reported that "they expected laws might be violated."

"Voters will also remember how General Paxton lead the effort to shut down Backpage, one of the largest human trafficking sites in the world, and even Mr. Bush publicly acknowledges there is no more conservative fighter than Attorney General Ken Paxton," Prior said, an apparent reference to Bush previously saying that he does not intend to challenge Paxton on conservative credentials but his integrity.

During his speech to supporters, Bush warned that Democrats are eager to face Paxton in November because they see him as "our weak link."

"They know that if he is our nominee again, they will have their first statewide elected office in close to 30 years," Bush said.

At least one Democrat, Joe Jaworski, has already launched a campaign for attorney general. Jaworski is a Galveston attorney and former mayor of the city. Lee Merritt, the nationally recognized civil rights lawyer from North Texas, has said he plans to challenge Paxton but has not specified which primary he would run in.

Despite the long-running indictment, Paxton faced no primary opposition for a second term 2018. He ended up having a closer-than-expected race in the general election, when the Democratic nominee, Justin Nelson, campaigned heavily on Paxton's legal troubles and finished within 4 percentage points of him.

Bush was first elected land commissioner in 2014 and won a second term four years later. He's received considerable pushback over his office's restoration project of the Alamo, the historical site in San Antonio that the General Land Office oversees.

In 2018, dissatisfaction with Bush's management of the Alamo project fueled three primary challengers to the land commissioner, most notably his predecessor, Jerry Patterson. Trump endorsed Bush in that primary, and he went on to win with 58% of the vote.

In recent weeks, Bush has taken heat in his job after his office gave Houston and Harris County $0 of the $1 billion available in the latest round of federal relief funding related to Hurricane Harvey in 2017. Under bipartisan criticism, Bush said last week he was asking the federal government to send $750 million directly to Harris County.

The Bush-Paxton matchup has the potential to splinter top Texas Republicans, or at least put them in an awkward position. The last time one statewide official challenged another in Texas was in 2006, when Comptroller Carole Keeton Strayhorn unsuccessfully ran as an independent against GOP Gov. Rick Perry.

U.S. Sen. John Cornyn has already indicated he will not get involved in the Bush-Paxton primary, and in an interview with The Texas Tribune on Tuesday, Gov. Greg Abbott said he was not focusing on 2022 campaigns yet — but did offer praise for Paxton.

"I think everybody knows that I’ve had a very effective working relationship with the attorney general," Abbott said, adding that Paxton has been a "big help" to the governor's office. "I think he’s done a very effective job in fights that we are waging together."