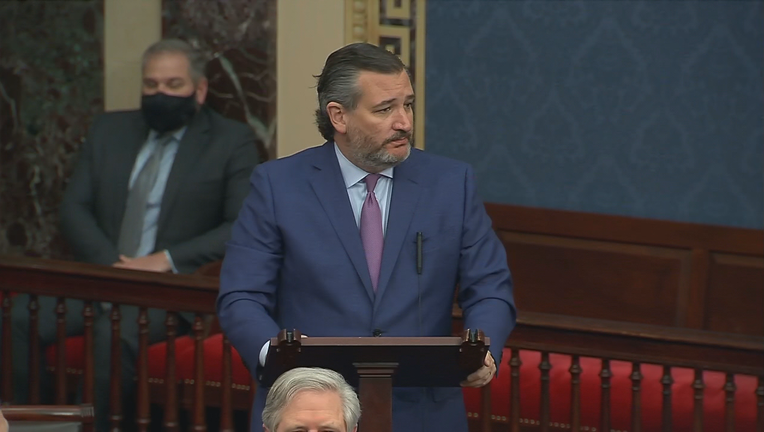 DALLAS - There are calls from Texas Democrats for Republican U.S. Senator Ted Cruz to resign for his role in supporting the failed effort to challenge the Electoral College results in Congress and partially inspiring Wednesday’s riot at the Capitol.

Cruz’s efforts, which were already going to fail due to Democratic unity and GOP senators saying they would certify, fizzled further after pro-Trump supporters stormed the Capitol and halted certification of the Electoral College for hours.

"It is your self-serving attempt at sedition that has helped to inspire these terrorists and their attempted coup," said Cruz rival Beto O’Rourke, who ran against him in 2018 for U.S. Senate.

Cruz had announced a coalition of 11 senators and senators-elect who planned to vote against certain state electors unless Congress appointed an electoral commission to immediately conduct an audit of the election results.

Cruz led the effort to challenge the electors from Arizona and spoke about his effort on the Senate floor shortly before the mob broke into the building.

"Ted Cruz is like Trump: he would watch democracy burn if he got to rule the ashes," Julian said. "He has embarrassed Texas and the entire nation."

Cruz tweeted as the riots occurred, asking for the mob to behave.

"Those storming the Capitol need to stop NOW," Cruz wrote. "Those engaged in violence are hurting the cause they say they support."

But he otherwise remained silent throughout the evening and did not sign his name to a second challenge to the results of Pennsylvania, but did vote to support it in a failed vote in the Senate.

When Capitol Hill reporters asked Cruz if he felt any level of responsibility for the attempted insurrection, he didn’t respond.

The chair of the Texas Democratic Party called for Cruz's resignation and the party launched a petition for supporters to sign.

Cruz was criticized by two leaders from his hometown of Houston – the mayor and police chief.

"Texans should hold Sen. Ted Cruz accountable for this fiasco," said Mayor Sylvester Turner, who is a Democrat.

"Shame on you @tedcruz, @GOPLeader, and all who fed the false narrative about our election, which has led to what we are witnessing in our Nation’s Capitol," Acevedo tweeted. "You fanned the flames of mistrust and history will hold you accountable for the ensuing chaos. Outrageous!"

Cruz eventually released a statement in the early hours of Thursday, as Congress was about to certify the Electoral College results.

"The attack at the Capitol was a despicable act of terrorism and a shocking assault on our democratic system," he said. "We must, and I am confident we will, have a peaceful and orderly transition of power, pursuant to the Constitution."

John Cornyn won't object to certification of Joe Biden's win, but other Texas Republicans will