WASHINGTON - Supporters of President Donald Trump stormed the U.S. Capitol Wednesday, marching into the building and forcing a stop to the congressional deliberations over challenges to Joe Biden's Electoral College victory.

The images from the nation’s capital are things that have never been seen before. And a day meant for a ceremonial procedure, the certification of the Electoral College vote, turned to violence.

The day started with the president holding a rally in front of the White House. During that speech, he encouraged his supporters to go to the Capitol.

While both the House and Senate debated objections to some of the presidential election results, the Capitol building was breached. Windows were broken and supporters of the president made it to the Senate chamber.

Members of Congress were even given gas masks because Capitol police used tear gas on protesters inside. 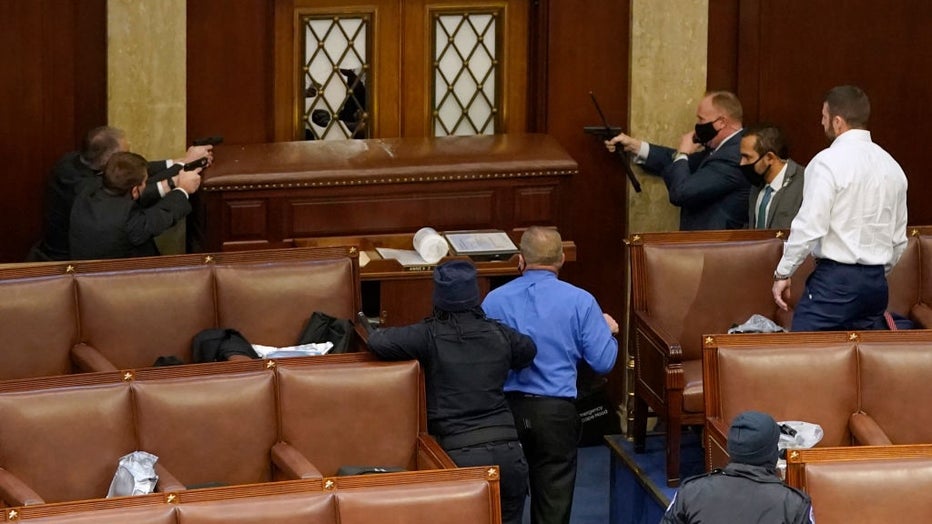 North Texas Congressman Collin Allred, who represents parts of Dallas, Richardson and Garland, was on the floor when the Capitol was on lockdown with protesters inside. He was taken to a secure location and is safe.

"For weeks the president and his allies in Congress have pedaled disinformation and refused to accept the results of a legitimate election. What we are seeing today is a culmination of those dangerous actions to subvert our democracy, and disregard our rule of law," he said.

Arlington Rep. Marc Veasey, whose district includes parts of Fort Worth and Arlington, spoke with FOX 4 after the lockdown at the Capitol. He said he was a couple of blocks away and was making his way there when he got a message from police that the Capitol had been locked down.

Veasey said the violence was caused by "President Trump's assault on our democracy."

"Enough is enough, they became so afraid of Trump and so concerned with losing their primary, or not being popular in their electorate, and sometimes you just have to say no," Veasey said. "That monster grows so big, that Frankenstein grows so out of control that people become afraid to stand up to it and they feed it...as a result, we have what we have today, which is anarchy."

He tweeted that he and his staff are safe, and thanked the police for protecting them.

A day meant for a ceremonial procedure, the certification of the Electoral College vote, turned to violence.

Texas Sen. John Cornyn put out a statement saying he was "disappointed by the results of the November election." But he said no one's disappointment can override the legitimate votes of millions of Americans and "our duty to uphold the Constitution, and laws of the United States."

Republican Senator Ted Cruz, who has backed the president as he tried to overturn the election, tweeted, "Those storming the Capitol need to stop NOW," and "violence is always unacceptable."

New Congresswoman Beth Van Duyne called on those who were storming to Capital to stop the violence.

Rep. Van Taylor called the protesters "criminals," and said their actions of storming the Capital were "un-American and should be condemned by everyone who loves our nation."

Former presidents who hold the Constitution dear say they are disturbed by the attack on democracy that was encouraged by President Donald Trump on Wednesday.

"This is how election results are disputed in a banana republic – not our democratic republic. I am appalled by the reckless behavior of some political leaders since the election and by the lack of respect shown today for our institutions, our traditions, and our law enforcement. The violent assault on the Capitol – and disruption of a Constitutionally-mandated meeting of Congress – was undertaken by people whose passions have been inflamed by falsehoods and false hopes. Insurrection could do grave damage to our Nation and reputation," he said, in part.

State Representative Jeff Leach called those who stormed the Capital "domestic terrorists," and a "true threat to our Nation." He said they should be arrested and prosecuted with the "full weight and force of the law."

Leaders here in North Texas condemned what they saw unfolding on their TV screens.

Dallas Mayor Eric Johnson tweeted he was "saddened and absolutely disgusted by the rioting at the Capitol," and added that this was "un-American and unacceptable."

Fort Worth Mayor Betsy Price said she was "horrified by what is happening in our nation's capitol. It's is devasating that our country has become this fractured. Violence is never the answer."