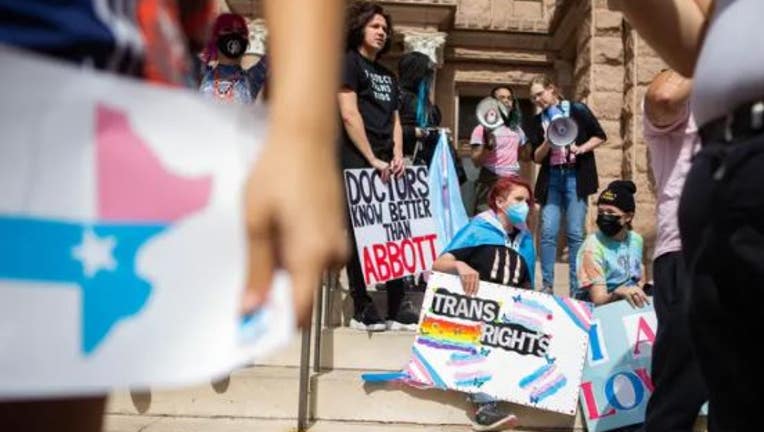 Demonstrators held signs in front of the Texas Capitol on Tuesday during a protest for transgender kids’ rights. Credit: Lauren Witte/The Texas Tribune

"This step was taken to safeguard our healthcare professionals and impacted families from potential criminal legal ramifications," a spokesperson for the hospital wrote in a statement.

Efforts to make criminal, controversial healthcare for children in gender transition have failed repeatedly in our state legislature. And yet, Governor Greg Abbott has ordered State agencies to investigate such health care as "abuse."

It wasn’t immediately clear late Friday what alternative options transgender patients of the hospital system have. The spokesperson declined to comment on the medical guidance doctors were providing to patients, what impact halting the treatment will have on patients or when the hospital expects to resume hormone therapies.

MORE: Texas temporarily blocked from investigating the family of a trans teen over gender-affirming care

Most gender-affirming care focuses on "social transition" — allowing a child to express their gender however they see fit. Some children are also given puberty blockers, a completely reversible prescription that has been used for decades to delay early-onset puberty. Paxton’s opinion also said body modification surgeries could be considered child abuse, but medical experts say those are rarely, if ever, performed on children.

Health care systems across the state have altered medical procedures in response to child abuse claims. GENECIS, a Dallas-based health program that offered hormone therapy to transgender children, formally dissolved in November. The closure came after protests accused the program of child abuse.

A study from the Stanford University School of Medicine found that transgender people who began hormone treatment in adolescence had fewer thoughts of suicide, were less likely to experience major mental health disorders and had fewer problems with substance abuse than those who started hormones later in life.

This article originally appeared in the Texas Tribune.