He says he doesn't have the authority to cancel games himself, but he wants them canceled. He says players and spectators aren't following proper protocols.

FORT WORTH, Texas - COVID-19 numbers are soaring in Tarrant County and government leaders are sounding a very loud alarm.

A record number of single-day cases, more than 1,500, was reported in the county on Monday. The topic dominated discussion at Tuesday’s commissioner’s court meeting.

Officials said that spread was also starting to reoccur in jails and nursing homes. Multiple outbreaks occurred in both of those settings earlier in the year.

County Judge Glen Whitley, unable to expand authority beyond the limits of Governor Abbott’s executive orders, sounded off about school and independent youth athletics. He says he doesn't have the authority to cancel games himself, but he wants them canceled. He says players and spectators aren't following proper protocols.

“I wish we could persuade the governor to give us a little more flexibility over our major urban areas. And I wish the schools would look into the possibility of postponing or suspending the athletic activities at this point,” Whitley said.

Carroll team mom Allie Kubiak says they are doing everything possible to keep the students and fans safe.

“We’ve had a lot of precautions. We have individual water bottles so they don’t share,” she said. “We have gaters and masks, hand sanitizer as they come on and off the floor. Most of them are doing the virtual learning.”

Judge Whitley shocked some Tuesday when he said he personally thinks school sports like football and volleyball should be put on hold, saying fans are not social distancing and they are not wearing masks.

Whitley acknowledged he has no power to make that change, saying school boards should decide. He says right now cases are high and hospitals are having a steady incline in patients.

“I think Judge Whitley is wrong there,” said parent Craig Vickley. “If the schools are doing what they are supposed to and they are protecting them, he’s saying its ok to keep the bars and restaurants open, I think there's a lot more there.”

Dr. Taneja didn’t say specifically that sporting events are the reason for more cases, but he says it’s one of many reasons.

“The only elimination of risk is when you don't attend those events. That's all I have on that,” he said. 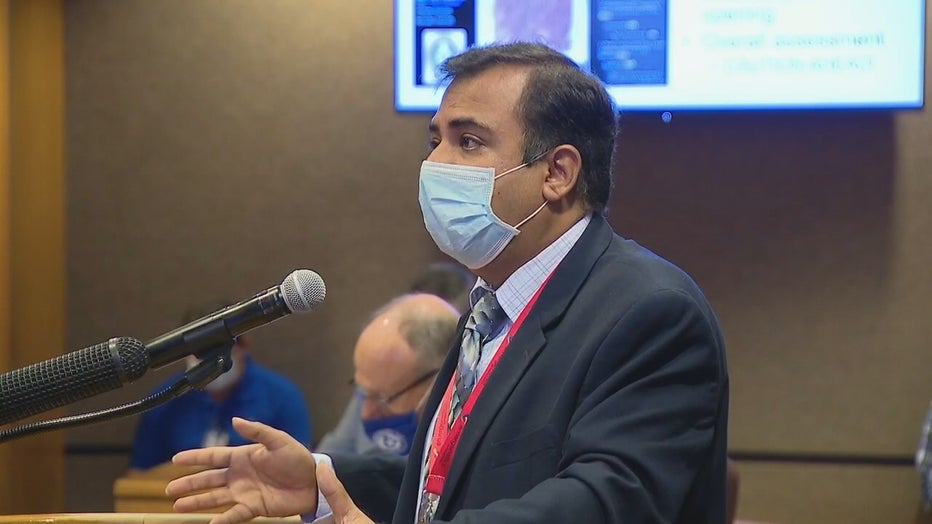 “Our holiday season is at risk,” Taneja said.

All agree on an extremely heightened alert for the fast approaching holidays.

A telling visual came after the meeting, where Taneja usually removes his mask for socially distanced interviews. On Tuesday, he continued to wear it.

“Our expectation is in the next few weeks, the hospitalizations are going to follow. If it’s not happening today, they will happen in the next two, three weeks,” Taneja said.

Whitley also had a projection for what’s to come.

COVID-19 numbers are soaring in Tarrant County and government leaders are sounding a very loud alarm.

“My first guess would be, certainly based on the numbers we’re seeing, that we will extend the state of emergency and probably extend the mask requirement,” Whitley said.

Fort Worth ISD says it has no comment on Judge Whitley's comments. We have not heard back from Arlington ISD or Southlake Carroll.