The Air Force performed a first-of-its-kind trifecta flyover for Super Bowl LV, featuring a B-52 Stratofortress, a B-1B Lancer, and a B-2 Spirit – more commonly known as the ‘stealth’ bomber. Here's the view from inside and outside Raymond James Stadium.

TAMPA, Fla. - Super Bowl LV in Tampa got off to a roaring start Sunday thanks to a rare trifecta flyover by the U.S. Air Force.

Just as Eric Church and Jazmine Sullivan finished the Star Spangled Banner, three of the Air Force’s front-line bombers – a B-52 Stratofortress, a B1-B Lancer, and the B-2 Spirit ‘stealth’ bomber – cruised over Raymond James Stadium to help kick off the big game.

The large planes lumbered through the air at about 1,000 feet with a roar that was audible for miles around the stadium.

Each plane flew in from its own base – the B-52 from Minot AFB in North Dakota, the B-1B from Ellsworth AFB in South Dakota, and the B-2 from Whiteman AFB in Missouri – then met in formation in restricted airspace before the flyover. 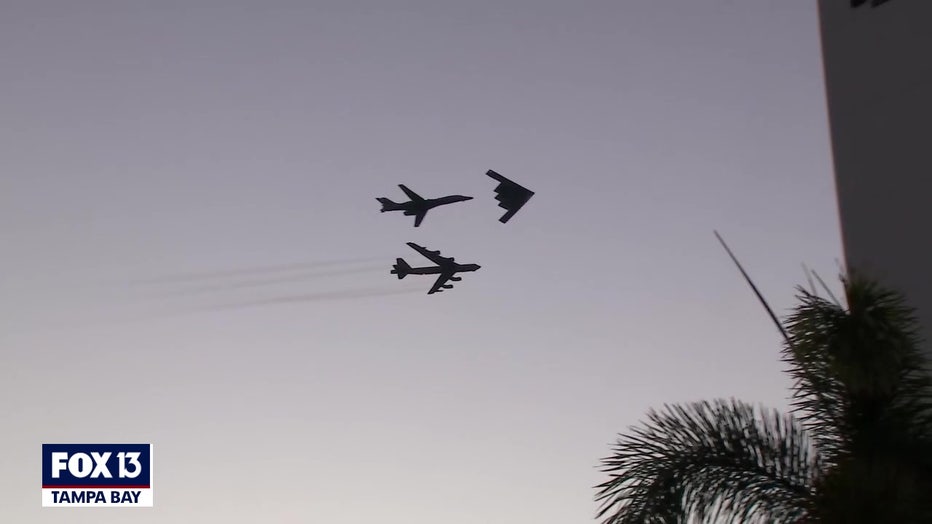 Afterwards, they all headed straight home.

Each plane's entire flight was expected to take about seven or eight hours round trip because the Air Force was including training in the sortie.

Captain Sarah Kociuba has a pretty impressive resume. She’s a B-2 instructor pilot, has flown more than 90 combat missions, and has more than 1,700 flying hours in five different aircraft.

"It is very exciting, I am very humbled," B-2 pilot Captain Sarah Kociuba told FOX 13 last week. "We are certainly doing our prep for it."

"That type of precise timing is what we practice every single time. That’s our job," agreed Maj. Anthony Mascaro, who has flown both the B-52 and the B-2.

"I just hope that everybody sees that their nation’s Air Force is the best air force in the world, and really feel that sense of pride to be American."

The aircraft were greeted with applause and cheers from the crowd at the game, which was smaller than normal because of the COVID-19 pandemic.

Moments later, the Kansas City Chiefs took the field to defend their title against the Tampa Bay Buccaneers, but the Bucs became the first team in NFL history to win the Super Bowl at their home stadium.

Hours after Tom Brady hoisted his seventh Lombardi Trophy, the crews returned to base -- although the weather, for some of them, was noticeably cooler than it was in Florida.

Posting photos of the flight on Facebook, Minot Air Force Base thanked the crews who launched two B-52s for the flight in temperatures as low as 40 degrees below zero.

"You're the real MVPs," they wrote. 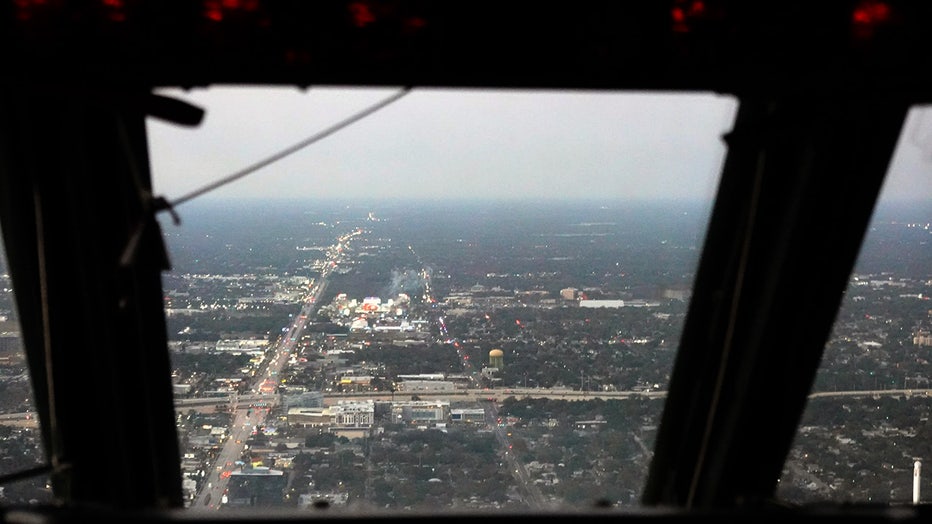 The view of Raymond James Stadium from the B-52 cockpit. Courtesy Minot AFB. 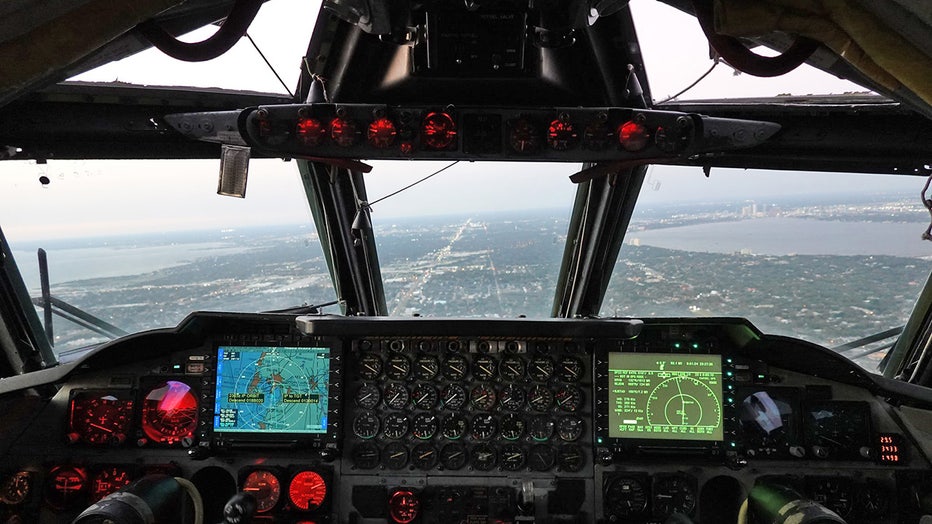 The view up Dale Mabry Highway from the B-52, with downtown Tampa to the right. Courtesy Minot AFB. 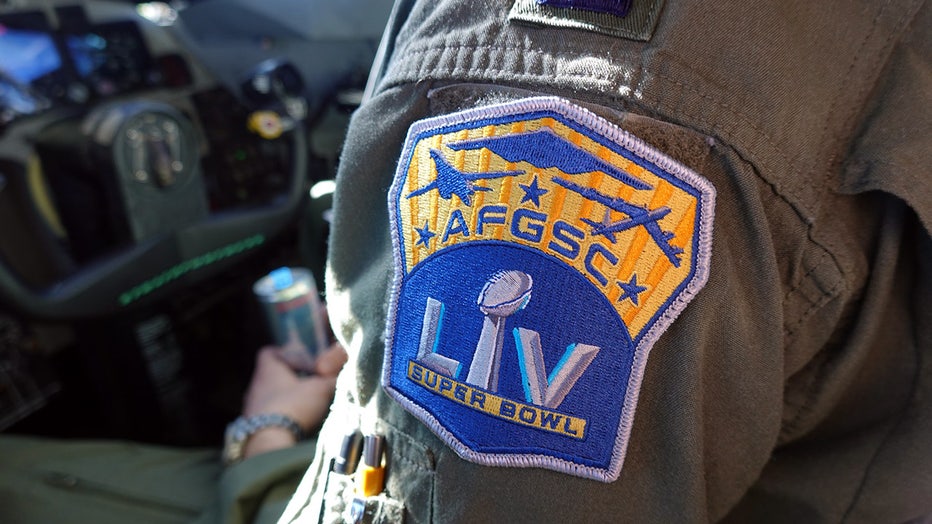 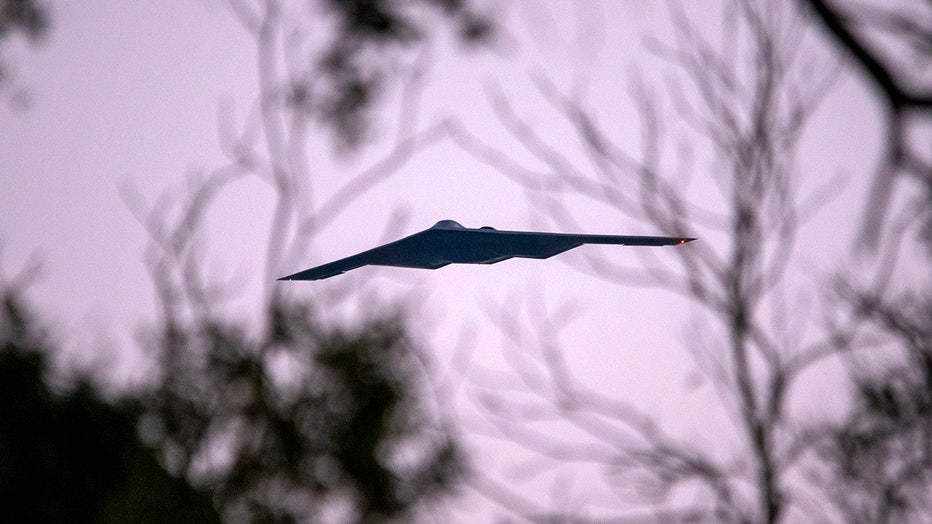 A B-2 Spirit at the center of the formation, flies over South Tampa. (FOX 13 photo) 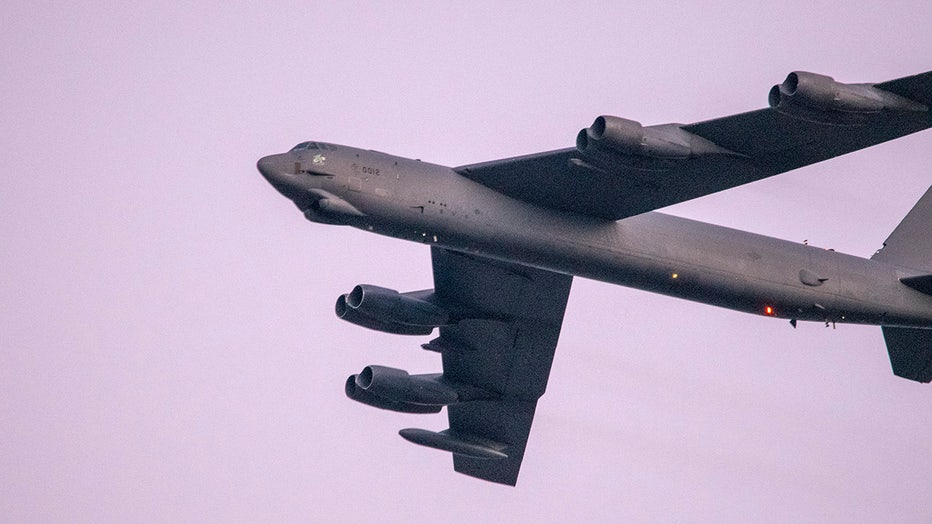 The B-52 cruises toward the stadium through the twilight sky. (FOX 13 photo) 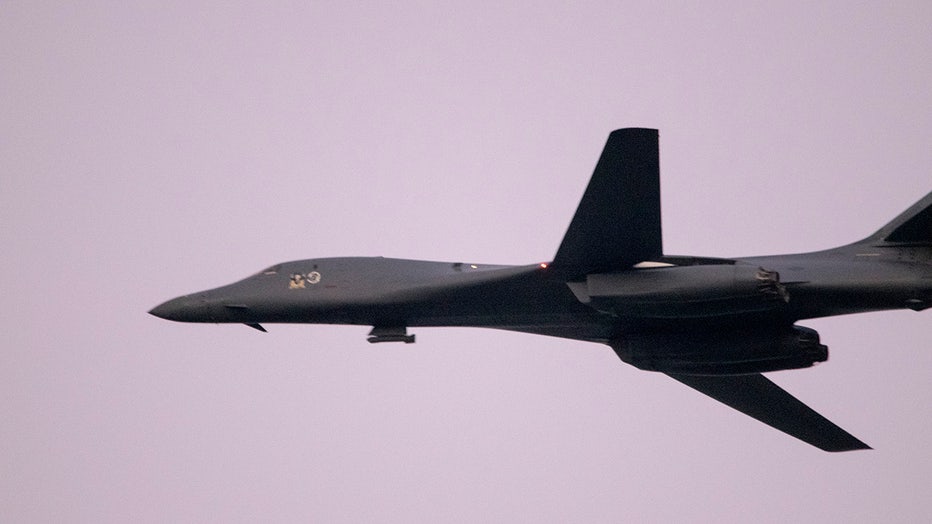 The B-1B flies with wings in the 'forward' position. (FOX 13 photo) 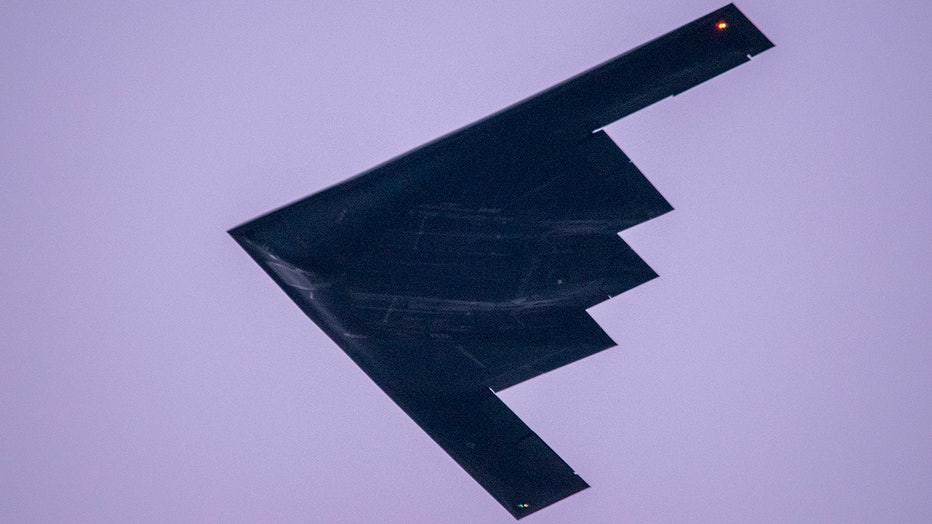 The B-2 as it crosses Kennedy Boulevard. (FOX 13 photo) 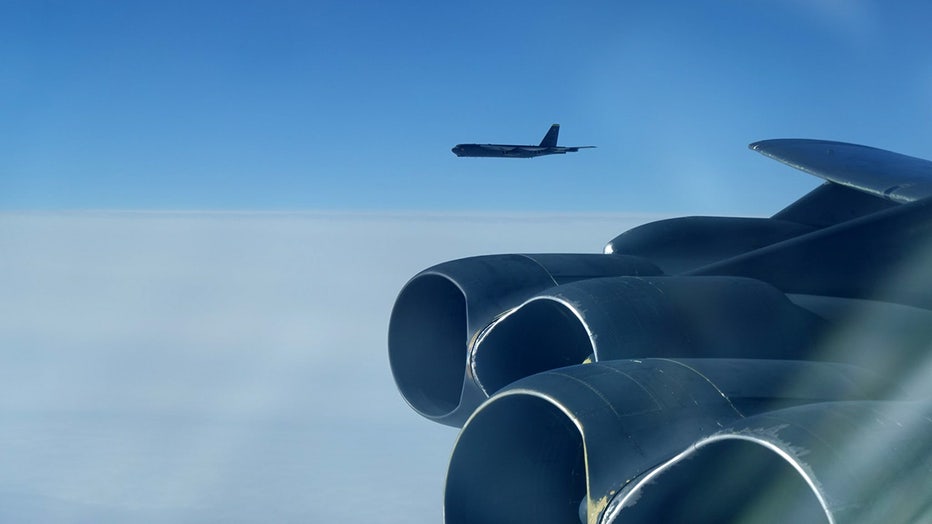 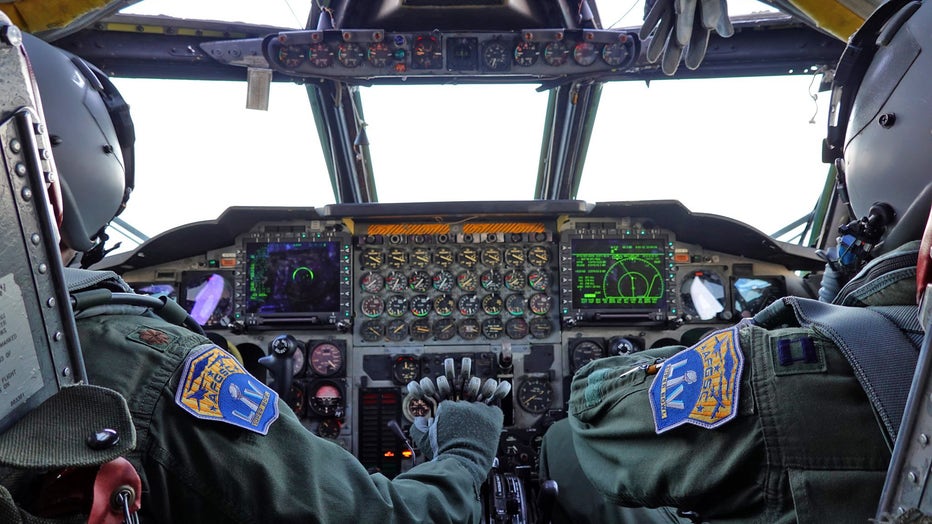 A view of the B-52 flight deck. Courtesy Minot AFB. 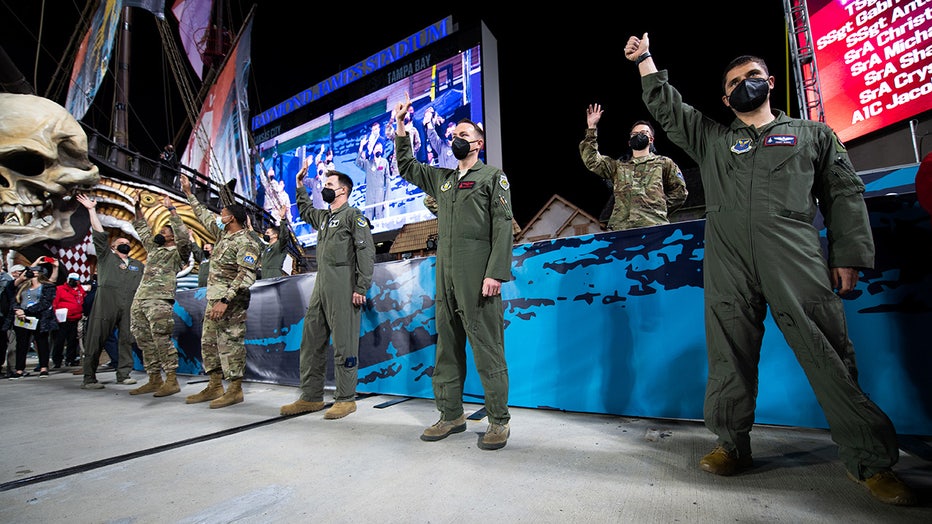 Airmen from across Air Force Global Strike Command are recognized for their part in the Super Bowl LV flyover. (USAF photo by Airman 1st Class Jacob B. Wrightsman)