FOX 4 Weather Meteorologist Evan Andrews talks about the severe weather risks for Wednesday morning. The rain is mostly in the morning with cooler temperatures and gusty winds following.

Last night's storms caused damage in Ellis County. A restaurant in Ennis, south of Dallas, lost its roof in the storm.

A Dairy Queen in the Ellis County city of Ennis took a serious hit. The entire front section of the restaurant came crashing down on vehicles parked in front.

The store’s general manager said she wasn’t there at the time but she heard about the severe weather from those who were working.

"All they said is that the roof blew off. And I didn’t know if they meant the whole roof or part of it or what," said Nicole Korthauer. "They got everybody in the walk-in, as far as I know. But it was just winds as they tell me." 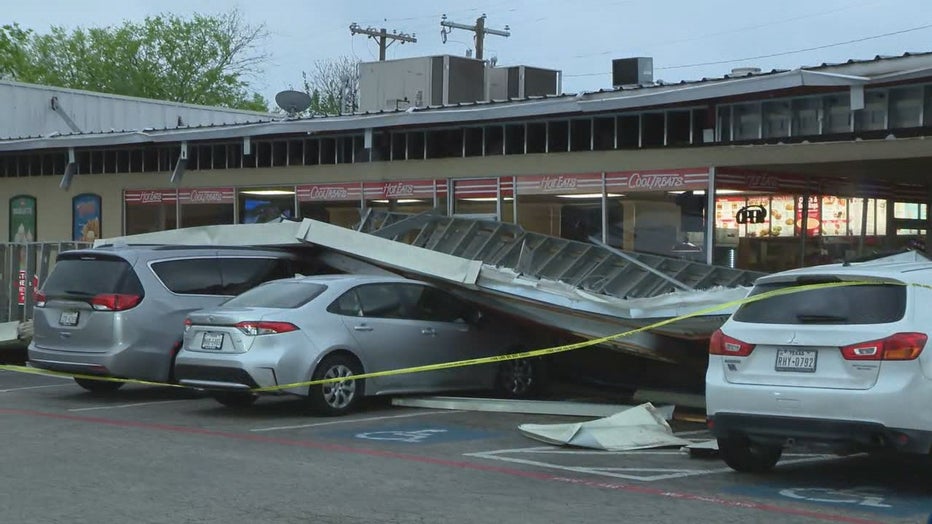 Meteorologists don’t believe the damage was caused by a tornado, rather straight-line winds. Those types of winds can reach the same speeds as a lower rated tornado.

Still, the move to have everyone take shelter inside the cold storage room was likely a good decision. No one was hurt.

Severe storms also caused some problems in Hood County, including damage to a grocery store in Granbury where the storm pulled the front doors off their hinges.

Surveillance video from the Brookshire’s Grocery Store on Highway 144 shows one of the sliding glass doors come off of its hinges and fly open. The wind even blew a display chair into the store.

The cashiers who were up front say it happened just after 5 p.m. as the rain was passing through. At one point, they were convinced the storm had turned into a tornado.