Dallas Police Chief Eddie Garcia convinced council members that reduced strip club hours should cut down on violent crime. He said 76 percent of violent crime is happening from 2-6 a.m. and is likely tied to the clubs.

DALLAS - The Dallas City Council voted Wednesday to require sexually oriented businesses to shut down from 2 a.m. to 6 a.m.

Workers in the adult entertainment industry showed up to protest this morning at Dallas City Hall to explain their concerns, but the measure still passed unanimously.

Dallas Police Chief Eddie Garcia convinced council members that reduced hours should cut down on violent crime. He said 76 percent of violent crime is happening from 2-6 a.m.- and is likely tied to the clubs.

People who work in Dallas strip clubs voiced their concerns about the change ahead of the vote.

"If we close at two my income will be slashed," said Adrianna Kabongo. "I don't know how I will survive, we don't deserve this."

Some single mothers said that the overnight hours are how they make ends meet without having to get daycare.

"This is where my money and income comes from, how I take care of family," said Erica Vasquez. 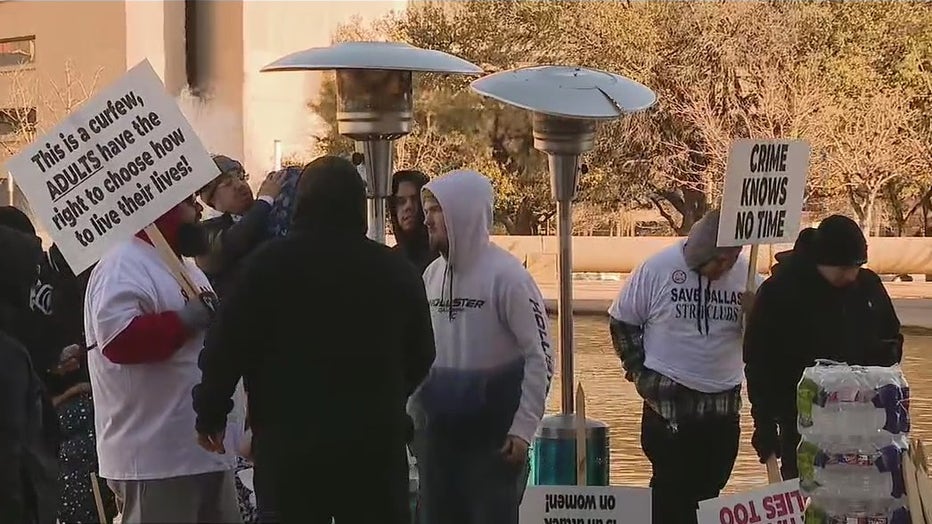 It's a message that resonated with Dallas City Councilman Omar Narvaez.

"I was raised by a single mom and understand your plight. My mom worked three jobs. I didn't know we were poor," he said.

Narvaez argued the city was rushing the policy change by not studying the issue with a task force first.

"We do this for every other industry in the city of Dallas. STR's, scooters, banks, we bring in the industry leaders and say work with us. But not this one," he said.

But others argued, strip clubs open the door for sex traffickers to victimize women.

"I was one of those young ladies who was entrapped by the age of 15," said Nissi Hamilton, a former dancer.

The new ordinance also raises the minimum age of workers at adult businesses from 18 to 21.

Mayor Eric Johnson said he will talk to his workforce czar about what job training support the city can provide to help those who may be out of work as a result of the reduced hours.

Plano and San Antonio are among the Texas cities that already required 2 a.m. closures for sexually oriented businesses.