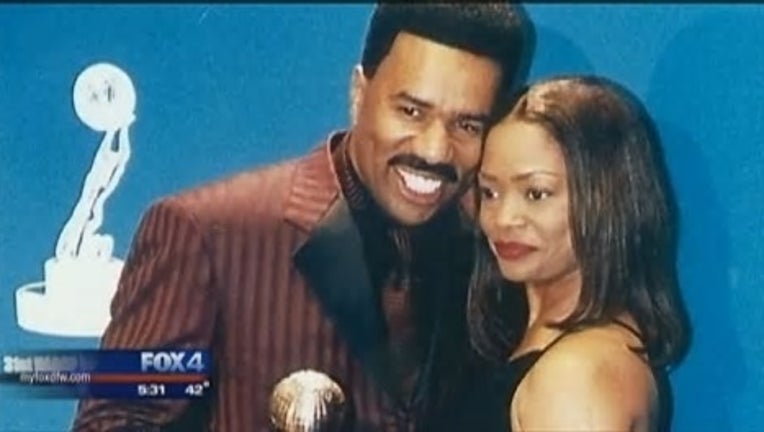 DALLAS - The former wife of entertainer Steve Harvey was arrested Thursday after a judge found her in contempt of court. She remains in jail in Collin County.

The civil matter is the latest in their legal fight that has gone on for several years. Their marriage in the spotlight of Harvey's career spanned 16 years, then ended in a bitter custody battle and divorce in 2005.

That divorce case is sealed and under a gag order.

Mary Vaughn is now serving 30 days behind bars, and says she wanted to tell her side of the story.

"I didn't violate any court orders," said Vaughn. "This is about ‘You're not supposed to be talking to anybody about your divorce.' That's what they're saying. I'm like, this is America."

Vaughn says she showed up at court without an attorney because she can't afford one, adding that Harvey was in court with a legal team and an entourage.

"I was not expecting a four hour long hearing without an attorney," she said.

"Am I angry? Yes," said Vaughn. "I missed six years of my son's life and I can't get those years back."

"I'm just a mother who wants to have access to my son without interference," she said. "I'm tired of getting pulled down to McKinney courthouse every time I say ‘Boo.' I'm not going to be silenced."

Harvey has custody of the couple's teenage son.

FOX 4 contacted Harvey's attorney for a response, who released the following statement:

"Please be advised that the Law Offices of Bobbie Edmonds represents. Mr. Steve Harvey, in the legal matter which has arisen from another episode of YouTube releases, which contain false, misleading, derogatory, defamatory, disparaging and malicious information about Mr. Harvey, his wife, and children by his ex-wife, Mary Vaughn Woolridge. (current married name) and formerly known as Mary L. Harvey, individually, and through her agent, representative and co-conspirator, Essie Berry aka EssieRerunBerry aka Essie Rerun Berry! aka Essie Nickerson aka Essie Jackson aka Essie Alexander. We filed another Motion for Contempt and Enforcement against Mary Vaughn Woolridge for the recent social media smear campaign and slanderous 2008 child abuse allegations against Mr.Harvey, among other violations of the prior gag order and permanent injunctions issued in 2008, 2011 and early 2013.

Further, since this matter has been under seal for legitimate reasons, Judge Tucker authorized Mr. Harvey and his attorney. Bobbie Edmonds, to provide limited disclosure of information to refute the false, misleading, derogatory, defamatory, disparaging and malicious statements published by Mary Vaughn Woolridge, her agent, assign and co-conspirator, Essie Berry aka EssieRerunBerry aka Essie Rerun Berry] aka Essie Nickerson aka Essie Jackson aka Essie Alexander through his lawyer, Bobbie Edmonds, in response to the recent negative publicity, false, misleading, derogatory, disparaging defamatory and slanderous information and statements made about Mr. Harvey, his current wife, family and others. The gag order and all prior permanent injunctions remain in full force and effect. This file remains sealed.

We obtained injunctive relief from Judge Tucker in McKinney. Texas. Subsequently, the Judge found her in contempt of court. Mr. Harvey only sought relief, and the Judge determined the appropriate relief, in part. to wit:

LEE SHACKLEFORD H. WOOLRIDGE has failed to comply with and has violated the

SHACKLEFORD H. WOOLRIDGE has illustrated a history and pattern of disregarding the

this case which are under seal, either directly or indirectly through third parties, intentionally

..."IT IS FURTHER ORDERED AND DECREED THAT ALL PRIOR PERMANENT

INJUNCTIONS AND GAG ORDERS AND SEALING ORDERS REGARDING THE

RESTRICTIONS ON RELEASING, PUBLISHING, AND OR DISCUSSING THE

CONTENT OF CAUSE NO. REMAINS IN FULL FORCE AND

As to the old 2008 allegations of child abuse, the matter was fully investigated by the appropriate individuals with the Texas Department of Family and Protective Services and the mother. MaryVaughn Woolridge. father, Steve Harvey and other essential people were interviewed. The CPS results stated in part, ..."Based on the information obtained, the child does not appear to be at risk...the case is closed without further investigation..." Mrs. Woolridge was fully aware and informed of the results of the CPS Investigation."