State Fair of Texas opens Friday with excitement from fairgoers

While there is plenty of fun and excitement at the State Fair of Texas, the crowds of people will likely see higher prices and longer lines.

DALLAS - While there is plenty of fun and excitement at the State Fair of Texas, the crowds of people will likely see higher prices and longer lines.

The state fair welcomed 2.5 million people through in 2019, and they’re looking to surpass that this year.

The gates officially opened Friday for the 135th State Fair of Texas.

A crowd of anxious fairgoers lined up outside the gates an hour before opening.

"We’re excited, we haven’t been out in a long time and just decided to come and enjoy ourselves today," Aurora Ramirez said.

"Excited, first time I’ve been here on the first time opening, I always come on Thursday, but looking forward to getting the day started," Ronald Watson said.

State Fair of Texas opens Friday with excitement from fairgoers

The gates officially opened Friday for the 135th State Fair of Texas.

Fair Park was packed for the first time in two years, and the crowds are expected to be larger over the weekend.

"We come every year on the first day with my parents, they are somewhere around here," Gabriella Ornelaz said.

Many are excited to keep up with traditions.

Amy and Randy Powell have been coming for more than 30 years.

"Exciting, very exciting. We just got home at midnight from a 16-hour drive in Colorado. We weren’t going to miss it, so we’re here," Amy said.

People young and old lined up to get Fletchers corny dogs and other fair favorites.

For the Reaves brothers, the co-owners of Smokey Johns’ BBQ, it’s their 22nd year working the fair.

"The first day has really been kind of nutty," Juan Reaves said.

Like other vendors, they said they’ve had a hard time finding employees. 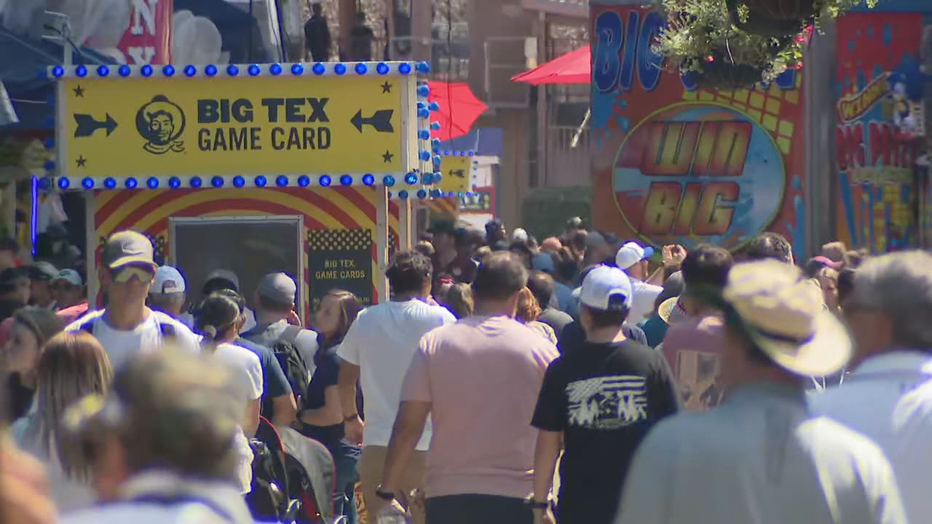 Fairgoers can also expect to see some slightly higher prices this year due to supply chain and production issues.

Dallas County residents can even get free coupons.

The first day was pretty successful, as the county said it administered about 100 shots.

The fair is recommending mask, but not requiring them, especially at indoor venues.

There were signs posted on indoor attractions that masks were required, but very few people seemed to follow those directions.

"We masked up when we were inside," Sydney Davis said. "We feel pretty comfortable, we are vaccinated and we’ve been okay so far.

There are also 500 hand sanitizer stations throughout the fairgrounds.

RELATED: State Fair of Texas to reopen this week with COVID-19 protocols in place

And after the in-person hiatus in 2020, with only a drive-thru option available, fairgoers and vendors are ready to be back in full force.

"You can just see it in people’s eyes, they’re just excited to be here," Juan said.

The State Fair of Texas is open daily at 10 a.m. and runs through October 17.

RELATED: State Fair of Texas kicks off 2021 season with new events and attractions