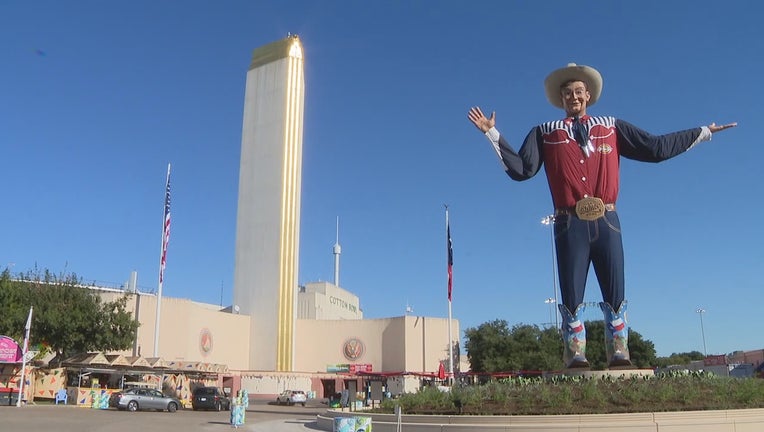 DALLAS - The State Fair of Texas is ready to welcome visitors back after being shut down by the pandemic last year.

FOX 4’s Shannon Murray was at the fair for its opening Friday morning. She got a preview of some of the best events and attractions.

State Fair of Texas Discounts & Deals: Save money on admission

"We’re so excited to have people back," said Jason Hays, the State Fair of Texas’ vice president of brand experience. "It’s going to be the best fair this year. The weather is awesome. It’s going to be great."

The State Fair of Texas reopened Friday. FOX 4's Shannon Murray got a sneak peak of all the fun.

Rodeos are back at the fair this year.

"It’s actually been a long time since we’ve had a rodeo during the State Fair of Texas. We used to have them a month before the fair started," Hays said.

The fair will have a different rodeo each weekend inside the Fair Park Coliseum.

Admission is free with a fair admission ticket.

The State Fair of Texas has a lot of different entertainment options this year. One show called the Country Roundup features lots of celebrities such as Pork Brooks, Catsy Cline, Hammy Wynette and Rooster Bryan. It's like a combination of America's Got Talent and Hee Haw!

The makers of the Fiesta de Marionetas show in 2019 are back with the all-new Country Roundup show on the Dr. Pepper Midway Stage.

The show features a "celebrity" cast of barnyard animals controlled by a mixture of animatronics and puppetry on a vintage carousel-style stage. Star armadillo Dusty Roads performs with big names like Pork Brooks, Catsy Cline, Hammy Wynette and Rooster Bryan.

Think of it as a combination of America’s Got Talent and Hee Haw!

For everyone who's missed the Midway, the State Fair of Texas is back. FOX 4's Shannon Murray tries out one of the new rides even if it means spending some time upside down.

Thrill seekers will love the Moonraker, one of two new rides on the Midway.

The spinning attraction is the only ride of its kind in the United States.

"You go around. You get a little dizzy at first but then when you get up in the air you don’t get dizzy. It pushes you back in the seat. You don’t have that feeling of falling out. It’s got over the shoulder restraints, but you could actually ride that without a lap bar. It doesn’t really need them. It pushes you back from the forces so it’s fun. It’s interesting," said Rusty Fitzgerald, the fair’s senior vice president of games and operations.

Some furry friends show off their moves on the opening day of the State Fair of Texas. All of the dogs in the show are rescues.

The popular All-Star Stunt Dog show is back this year but in a new location.

It features 16 dogs rescued from various pounds and shelters across the country. Several are from Texas.

"We take then with us and we get them all trained up and perform with them live in our shows," said Bryan Arney, the show’s trainer. "We’ve got all sorts of dogs that will run, jump and spin for applause and they’ll be excited to meet you as well."

The daily show used to be near the Pan Am Arena but is now located near the front entrance in the Marine Corps Square.

The Pan Am Arena instead will be home to the Lone Star Barnyard petting zoo. The pig races are also moving to the Fair Park Coliseum

FOX 4's Shannon Murray is live at the fair with a look at one performer who promises to impress with his strength.

Back by popular demand, Might Mike promises to impress fairgoers with his strength.

"I’m glad to be here. I’m actually the strongest man in the world willing to wear this outfit in public," joked Mike Johns, a.k.a Mighty Mike. "I was here in 2019 and everyone loved it. I had a great time here so I’m back to show you what I’ve been doing in my time off."

When he’s not bending horseshoes or juggling bowling balls and sledgehammers, Mighty Mike is known for his witty humor and questionable dance routines.

The old-time strongman show is also moving to a new location on the Sideshow Stage.

The State Fair of Texas returns Friday after the pandemic forced it to hold a smaller, drive-thru event last year.

There are some safety precautions to be aware of. The fair is asking everyone to abide by its mask mandate while indoors or in crowded areas.

There may also be longer than usual waits at some food booths. That’s because fair vendors are being affected by staffing shortages.

"I usually hired 130 people. Two weeks ago, I had 30. I was short by 100 people," said Jack Pyland with Jack’s French Frys. "The thing we are most frightened of is keeping up with the customers. We are still hiring as we speak."

The fair runs through Sunday, Oct. 17.