In celebration of the release of the epic conclusion of the Skywalker saga,

CHICAGO - In anticipation for and celebration of the release of '“Star Wars: The Rise of Skywalker” — the epic conclusion of the Skywalker saga — United Airlines is teaming up with the film franchise to add a Star Wars-themed plane to its fleet, which was unveiled Friday.

The Star Wars-themed Boeing 737-800 will feature a paint design on the outside as well as a redesigned onboard experience.

Doug Chiang, vice president and executive creative director for Lucasfilm, worked with his in-house design team to dream up the concept and was instrumental in the execution.

“Approaching the design for United Airlines was unlike anything I had ever done before,” he says. “I typically design for a flat screen when I design for films… an airplane fuselage presented a broad and exciting canvas.”

Chiang used the plane’s shape to his advantage, creating an image with a distinct sense of depth.“We leveraged the curve of the fuselage to give the impression of three-dimensionality,” he said. 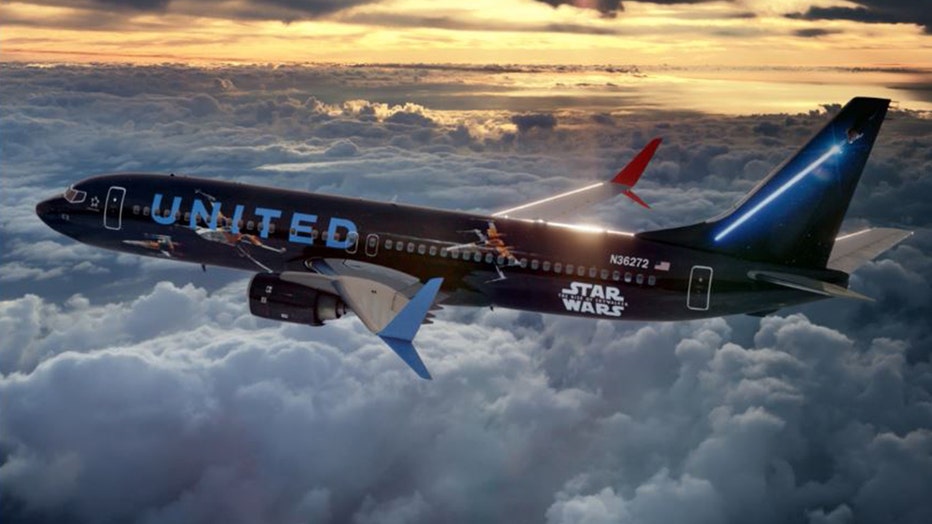 United Airlines and Star Wars joined forces to celebrate 'Star Wars: The Rise of Skywalker' with a themed 737-800 aircraft.

The main X-wing and TIE fighter in the design were placed on the broadest area of the aircraft’s fuselage, which gives the illusion that the ships are flying out, away from the pane and toward the viewer. Two smaller ships situated on the upper and lower edges of the fuselage help reinforce the perspective.

“The resulting illusion is one of false dimension, like a classical trompe l’oeil painting where the imagery seems to jump out of the canvas,” United Airlines described.

When passengers board the aircraft, they’ll be greeted by Star Wars music, and the headrests will boast emblems of either the Resistance or the First Order, the film’s dueling factions.

United will also be passing out commemorative pins to passengers throughout December to celebrate the movie’s premiere.

"United Airlines and the Star Wars franchise share a common goal: connect people and unite the world," said Mark Krolick, United's vice president of marketing. "We are thrilled to join forces and help promote the concluding chapter of the Skywalker story, while at the same time enlisting help from our new friends from the Star Wars universe to demonstrate the importance of safety for our customers and colleagues.“

United Airlines is also rolling out a new Star Wars-themed in-flight safety video in which characters from the new film will perform safety demonstrations.