WEATHERFORD, Texas - Authorities in Parker County arrested a 32-year-old woman on animal cruelty charges after a horse was found to be so malnourished, it had to be euthanized.

Ramona Magaly Vega was arrested on Wednesday in connection with the “abuse and neglect” of a 2-year-old Gelding Paint horse.

The “severely malnourished” horse was found in the 100 block of Onyx Court in Weatherford.

Parker County Sheriff Larry Fowler said animal control officers initially thought the horse was dead when they first arrived, but later found that it was “suffering alive” and was unable to walk. 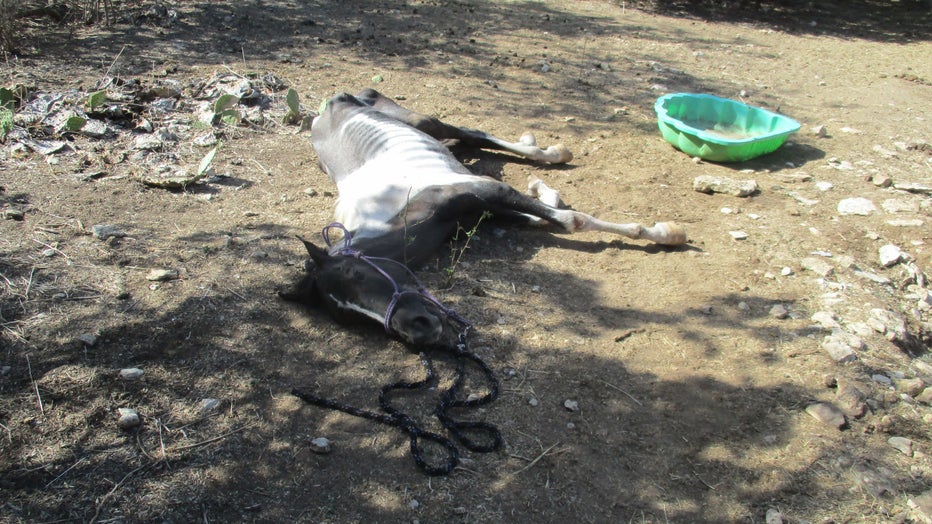 A veterinarian was then called to the scene to assess the horse’s health, and determined that it was in such poor condition, it had to be humanely euthanized at the scene.

“Starvation is painful for any animal,” Sheriff Fowler said in a release. “It’s a horrible way to die. This horse died a very cruel death which was 100 percent avoidable.”

Authorities spoke with Vega, who said that a co-worker had dropped the horse off on her property about two months ago, and said he would pick up the horse a few days later.

He never came back to pick the horse up.

Vega added that the horse was already in bad condition when it was dropped off.

Investigators found that there was a trough of water on the property, but the horse was too weak to walk over and get water.

When questioned, Vega reportedly said the horse had been up walking just hours earlier, but authorities added that she later changed her story.

Investigators found that “Vega did not care for the horse as she had claimed, and continued to deny it food, water and medical attention.”

The vet also found that the horse had been “struggling and suffering” in the same spot for several days.

Vega was then arrested for animal cruelty, and also jailed on theft charges out of Dallas County.