A multi-day severe weather outbreak with tornadoes, destructive winds, large hail and flash flooding is underway across parts of the South, and the dangerous storms will continue to slowly march eastward through midweek.

The SPC says several tornadoes are likely in these areas, including a couple of strong tornadoes, in addition to widespread damaging winds and isolated large hail.

HOW TO WATCH FOX WEATHER ON TV 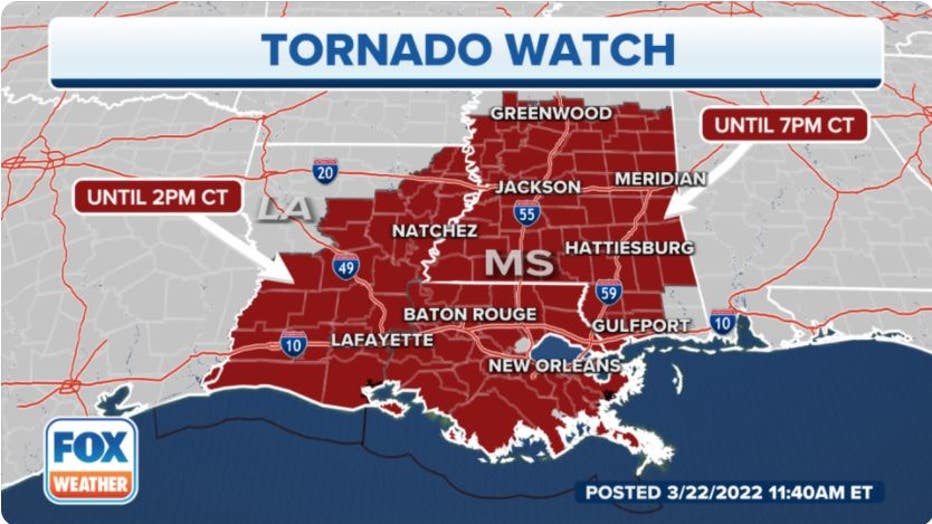 The SPC received 20 initial reports of tornadoes on Monday and Monday night, most of which were in Texas, but the number of confirmed tornadoes won't be known until National Weather Service meteorologists are able to assess the damage in the days ahead.

A 73-year-old woman of Sherwood Shores in Grayson County, Texas, died in Monday's severe storms, according to Grayson County Emergency Management Director Sarah Somers. Ten others in the county were injured and treated at local hospitals.

FOX Weather can confirm at least 16 others were also injured in Texas during this severe weather outbreak. Three were seriously injured between Cooper and Crockett after an apparent tornado ripped through the area, four suffered minor injuries near Ore City from a possible tornado, and another nine people were injured in Jacksboro.

Here's what to expect through Wednesday. Be sure to download the FOX Weather app for the latest forecast and weather alerts for your exact location, plus our channel's 24/7 livestream.

The severe weather outbreak will continue Tuesday across the lower Mississippi Valley and the central Gulf Coast, with some threat continuing into Tuesday night.

The highest threat of severe thunderstorms will stretch from Louisiana into Mississippi, Alabama and the western Florida Panhandle. This includes the cities of New Orleans and Baton Rouge in Louisiana, Jackson and Hattiesburg in Mississippi, Tuscaloosa in Alabama and Pensacola in Florida.

Several tornadoes, widespread destructive wind gusts and large hail are all likely. Some of the tornadoes have the potential to be EF-2 or stronger, particularly in the pink-shaded area on the map below from southwestern to eastern Louisiana, central and southern Mississippi and far western Alabama.

Heavy rainfall capable of flash flooding is also possible from the South into parts of the Ohio Valley. 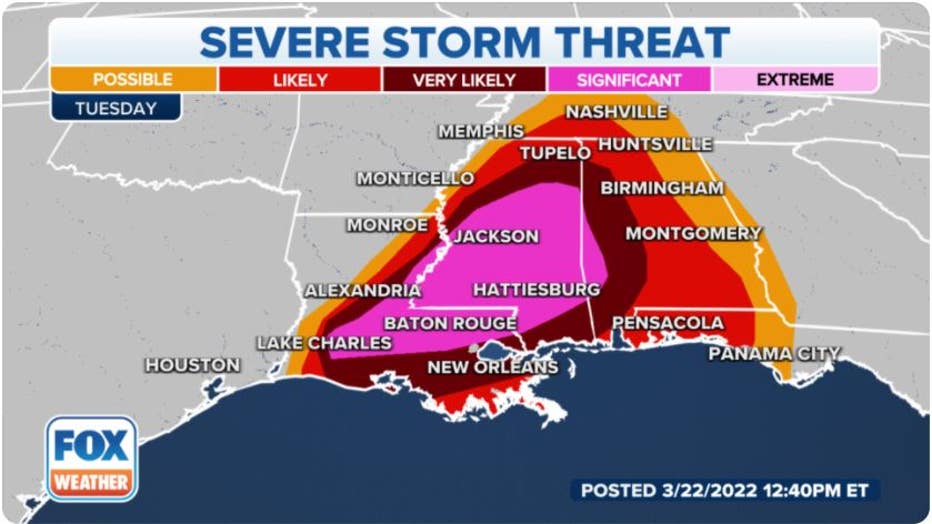 The risk of severe storms is expected to continue into Wednesday farther east across the Southeast, but the threat will be lower than Tuesday.

Areas from northern Florida into southeastern Alabama, Georgia and the Carolinas will have the highest risk of severe thunderstorms. This includes the cities of Tallahassee in Florida, Charleston and Columbia in South Carolina and Raleigh/Durham and Charlotte in North Carolina.

A few severe storms could also spread northward into the Ohio Valley.

A couple of tornadoes, damaging wind gusts and large hail are all possible with Wednesday's storms.

Additionally, a soaking rain will overspread a large portion of the Southeast and Northeast. 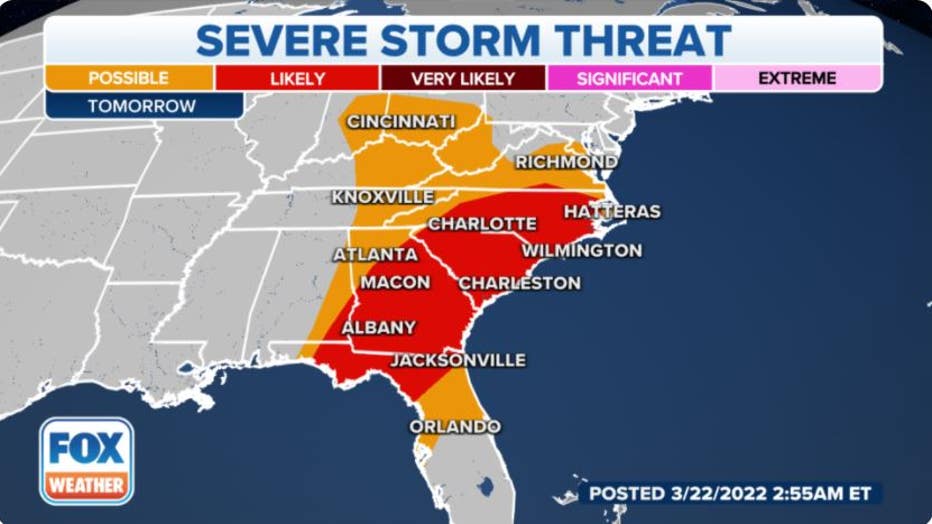 Many areas from the South to the Mississippi and Ohio valleys are expected to pick up more than an inch of rain through Wednesday, with locally higher totals between 2 and 5 inches not ruled out in some spots.

This heavy rainfall could trigger flash flooding, especially where any heavier bands of rain stall for a period of a few hours or more.

7 FACTS YOU SHOULD KNOW ABOUT FLASH FLOODS 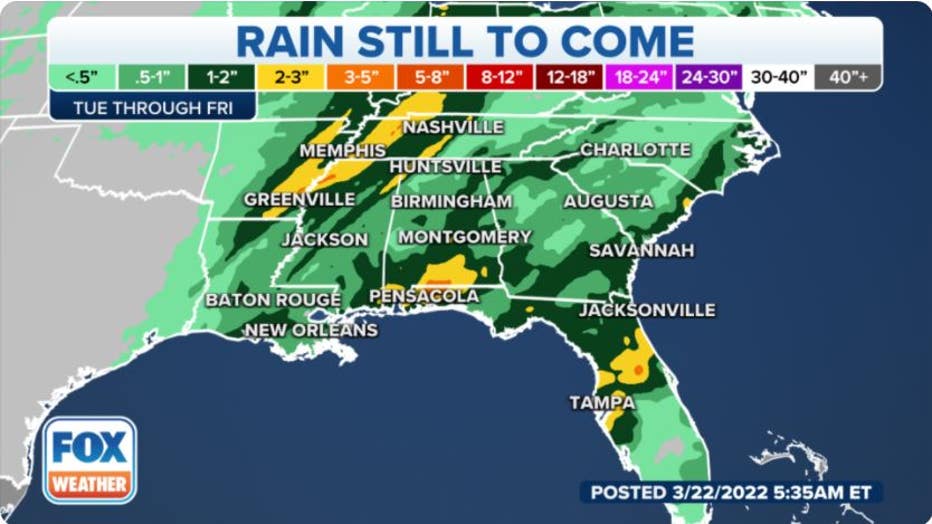 The National Weather Service has issued Flood Watches from East Texas to the lower Mississippi and Tennessee valleys to alert residents of this threat of heavy rain.

Now is the time to prepare for this week's severe weather and flash flooding threats if you live in the South. Click here for a list of tips to guide you through the preparations. 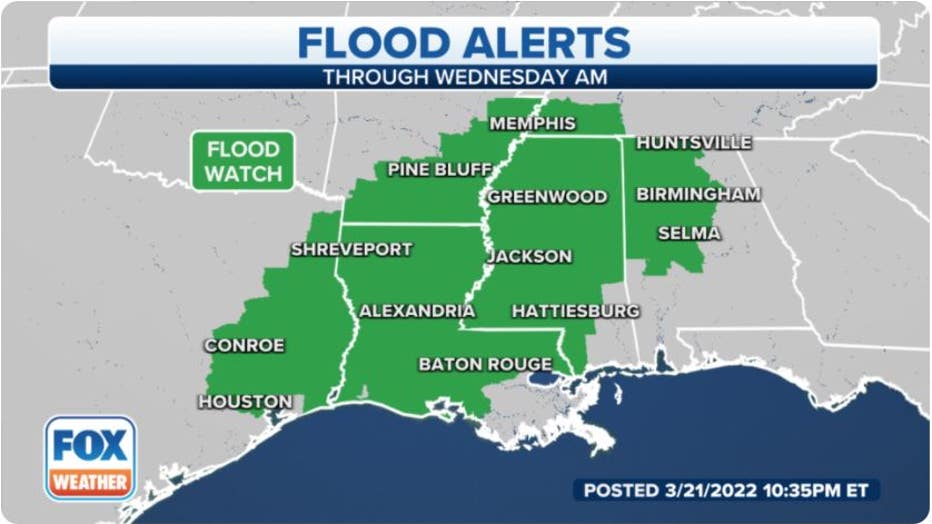 Flood Watches are in effect for portions of the South. (FOX Weather)

Get updates to this story from FOXWeather.com.