What started as a protest turned into a crime spree overnight in Arlington.

ARLINGTON, Texas - What started as a protest turned into a crime spree overnight in Arlington.

Arlington police said the large group of so-called protesters Monday night might have been carrying Black Lives Matter posters, but they were not protesting. Instead, they burglarized several businesses. 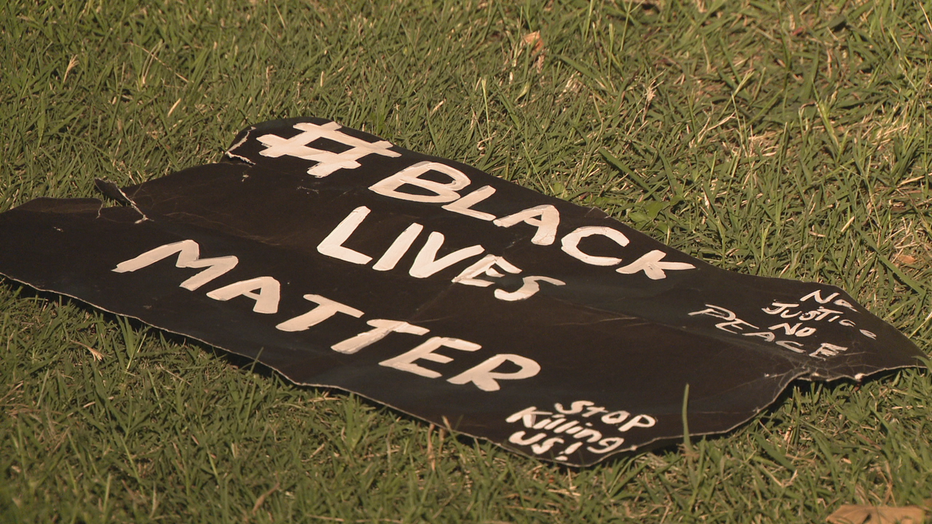 There are no plans to issue a curfew in Arlington yet, despite several incidents involving vandalism and looting. There was a peaceful protest in downtown Arlington Tuesday afternoon.

In video shared with FOX 4, people can be heard yelling about stealing TVs.

The group first burglarized a pawn shop off South Cooper Street. They took guns and electronics. One person was arrested after that incident, police said. 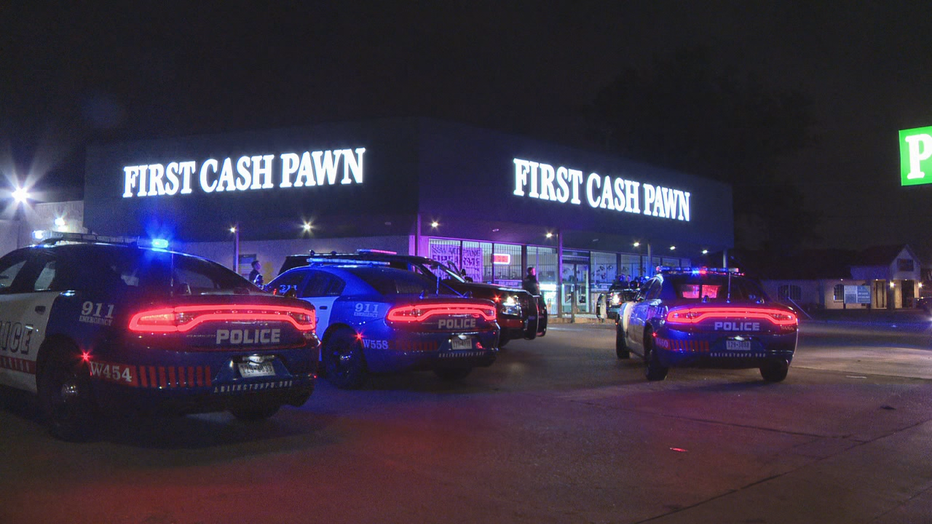 The Parks Mall was also targeted. Police officers had set up a barrier on one side to prevent looting, but the group found a way to get to Jared Jewelers and tried to get in.

From there, the group took off on Interstate 20. They burglarized the American Jewelry Exchange near the mall before driving away from officers again, this time throwing jewelry at them out the window. 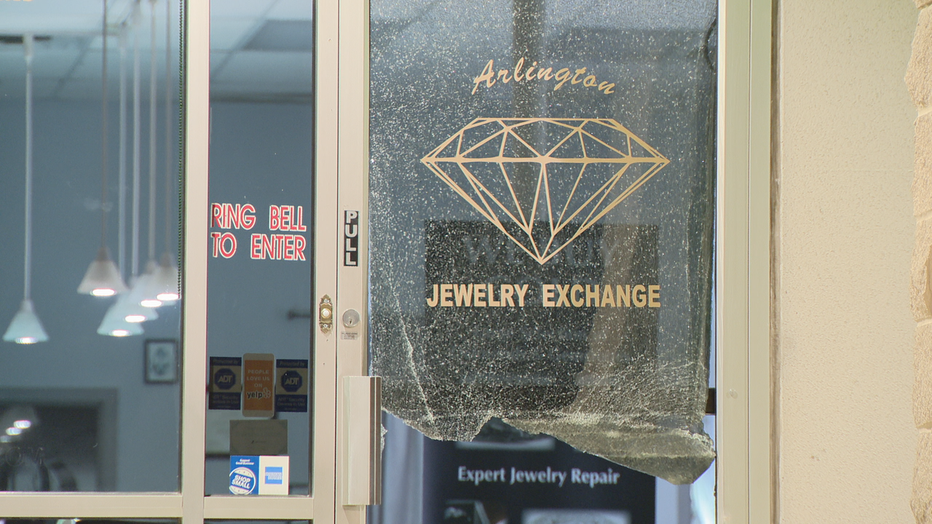 The Walmart off North Collins Street was also burglarized. At one point, police said the people involved tried setting the store on fire with employees inside. Five people were arrested in that case. 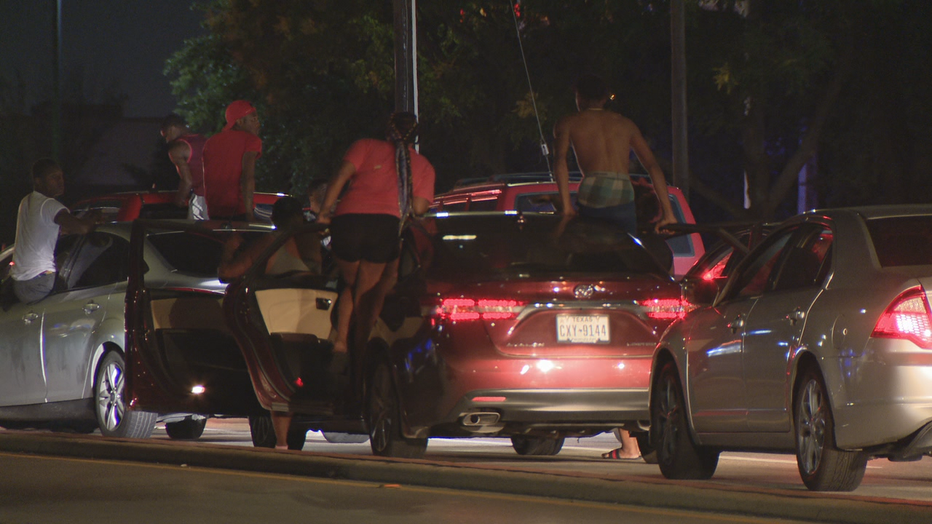 Police said about 75 vehicles were involved in the crime spree that lasted well into the early morning hours. They were able to track their movements through social media.

“We are not going to tolerate unlawful protests that cause damage to our city property, injuries to officers, damage or looting personal or private property in Arlington. We’re a lot better than that,” said Lt. Chris Cook with the Arlington Police Department. “Parents need to get involved. They need to know where their kids are at because, unfortunately, it’s going to lead to someone getting hurt.”

A police spokesman says officers finished their shifts saddened by the amount of violence after trying to protect others protesting peacefully.

A protest in Arlington took a turn when police say the large group began looting businesses and vandalizing property.

On Tuesday, there was prayer at the police station to prepare for a potentially long night.

Justin Simmons used his time and talent to honor police after the attack on officers in Downtown Dallas nearly four years ago. But Monday night, his artwork became a canvas for vandals. 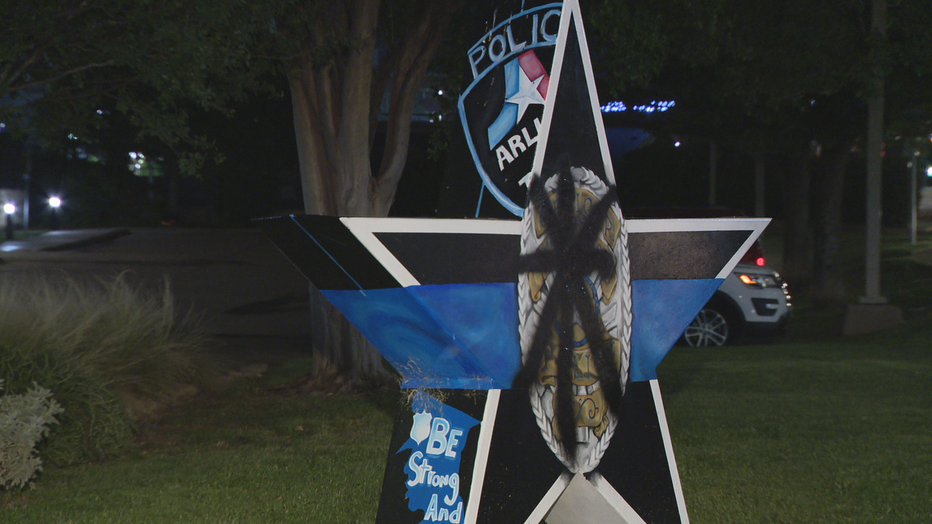 “I’ve done public art and there’s a 50 percent chance someone is going to write something on there,” he said.

Simmons just has one question for whoever thought they could steal something precious from him and the community.

“Is it really for the movement or is it just your opportunity to destroy things?” he said.

The police department’s headquarters was also hit. A patrol car and the police star in front of the building were vandalized with spray paint.

Police arrested six people Monday night. They say they have good video of others who got away they are in the process of issuing arrest warrants.