NOAA has released timelapse footage recorded by the GOESEast satellite showing the evolution of Hurricane Sam from September 23-28, 2021.

WASHINGTON - An element found in the ocean is now at the heart of new research by the National Oceanic and Atmospheric Administration that could potentially lead to improved forecasts of the most dangerous hurricanes: salt.

According to NOAA, the agency has made steady progress in forecasting the track of a hurricane, but progress has been slow in improving the prediction of rapid intensification of hurricanes.

Rapid intensification is when the maximum wind speeds that drive a hurricane rapidly increase by 35 miles per hour or more in 24 hours or less. 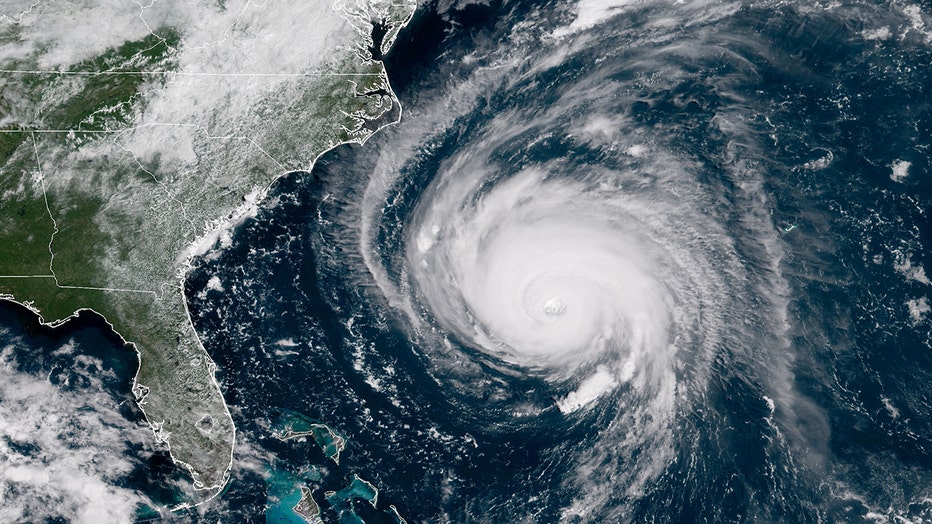 In this satellite image provided by U.S. National Oceanic and Atmospheric Administration (NOAA), Hurricane Florence churns through the Atlantic Ocean toward the U.S. East Coast on September 12, 2018. (Credit: NOAA via Getty Images)

One of the key ingredients to hurricane intensification is warm sea surface waters, but NOAA says the water is sometimes prevented from cooling due to a lack of saltiness.

According to the agency, freshwater from major rivers is flowing into the ocean and can create a layer on the surface of much warmer, fresher water.

"This layer can inhibit the saltier cooler ocean water from the deep from rising and mixing and cooling the ocean. Without this cooling, hurricanes slurp up more heat energy from the ocean and are more likely to strengthen rapidly, contributing to increasing winds," NOAA wrote in a press release Thursday.

Scientists have observed this occurring in the western Caribbean and Atlantic near where large amounts of freshwater flow from the major rivers of the Amazon, Orinoco and Mississippi.

"The bottom line is that when salinity is lower in the ocean, rapid intensification is more likely," Greg Foltz, oceanographer and hurricane researcher at NOAA’s Atlantic Oceanographic and Meteorological Laboratory in Miami, said.

This discovery comes after the conclusion of another busy hurricane season, which ended with 21 named storms in the Atlantic. That included seven hurricanes, with four reaching Category 3 strength.

The entire list of names was exhausted through the very busy season, and 2021 became the 3rd most active season on record.

With earlier and more active seasons seemingly becoming the norm, scientists will need to increasingly gather and collect real-time observations of our oceans.

In Sept., NOAA released the first video footage from inside a major hurricane using an unscrewed surface vehicle, which is a floating drone.

RELATED: 2021 hurricane season ends as the 3rd most active on record

According to NOAA, one of Saildrone's drones, the Saildrone Explorer SD 1045, was directed into the midst of Hurricane Sam, a Category 4 hurricane.

"SD1045 is battling 50-foot waves and winds of over 120 mph to collect critical scientific data and, in the process, is giving us a completely new view of one of earth’s most destructive forces," NOAA wrote in a press release on Sept. 30.

NOAA hoped the drone would yield new insights into how large and destructive tropical cyclones grow and intensify.

"Using data collected by saildrones, we expect to improve forecast models that predict rapid intensification of hurricanes," said Greg Foltz, a NOAA scientist. "Rapid intensification, when hurricane winds strengthen in a matter of hours, is a serious threat to coastal communities. New data from saildrones and other uncrewed systems that NOAA is using will help us better predict the forces that drive hurricanes and be able to warn communities earlier."