Sacramento police are looking for multiple gunmen after a deadly shooting over the weekend.

SACRAMENTO, Calif. - Authorities in California on Monday said one person was arrested in connection to a shooting in the capital city of Sacramento, killing six people and injuring 12 others.

Police said Dandre Martin, 26, was booked as a "related suspect" on assault and illegal firearms charges. Detectives and SWAT team members found one handgun during searches of three homes in the area.

It’s believed that multiple shooters fired more than 100 rounds into a crowd around 2 a.m. Sunday on the outskirts of the city's downtown entertainment district as bars and nightclubs emptied for the night, officials said.

Also on Monday, the Sacramento County coroner identified the three women who were killed as Johntaya Alexander, 21; Melinda Davis, 57; and Yamile Martinez-Andrade, 21. The three male victims were identified as Sergio Harris, 38; Joshua Hoye-Lucchesi, 32; and Devazia Turner, 29. One of the victims had been identified Sunday.

"My son was a very vivacious young man. Fun to be around, liked to have fun, smile all the time, don't bother people," Harris' mother Pamela Harris told KTVU FOX 2. "For this to happen is crazy."

Of the 12 wounded, at least four had critical injuries, according to the Sacramento Fire Department.

The shooting erupted just after a fight broke out on a street lined with an upscale hotel, but police said they did not know if the altercation was connected to the shooting. Video from witnesses posted on social media showed rapid gunfire for at least 45 seconds as people screamed and ran for cover.

It was the second mass shooting in Sacramento in the last five weeks.

Police Chief Kathy Lester revealed few details from the investigation and pleaded with the public to share videos and other evidence that could lead to the killers.

"The scale of violence that just happened in our city is unprecedented during my 27 years here," Lester told reporters during a news conference at police headquarters. "We are shocked and heartbroken by this tragedy. But we are also resolved as an agency to find those responsible and to secure justice for the victims and the families."

The shooting occurred in an area anchored by the Golden One Arena that hosts concerts and the NBA's Sacramento Kings. Sacramento Mayor Darrell Steinberg and other city officials decried escalating violence in the city while also urging people to keep coming downtown for events like NBA games and performances of the Broadway musical "Wicked."

At least six people were killed and 10 injured in a mass shooting early Sunday as bars and nightclubs were closing in downtown Sacramento, California.

"We can never accept it as normal and we never will," Steinberg said of the shooting. "But we also have to live our lives."

The crime scene on Sunday sprawled across two city blocks, closing off a large swath of the city’s downtown. Bodies remained on the pavement throughout the day as Lester said investigators were working to process a "really complex and complicated scene" to make sure investigators gathered all the evidence they could to "see the perpetrators of this crime brought to justice."

Small memorials with candles, balloons and flowers were placed Monday morning near the crime scene. One balloon had a message on it saying in part: "You will forever be in our hearts and thoughts. Nothing will ever be the same." 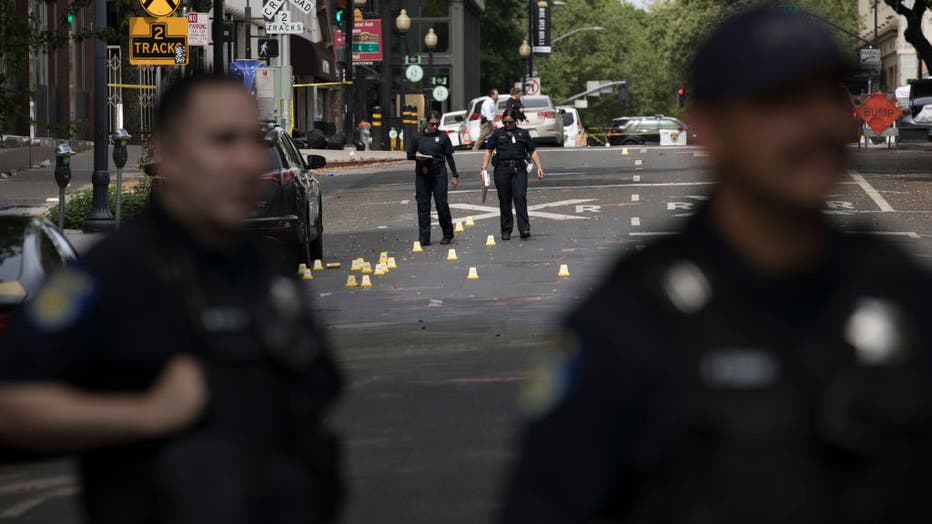 Police officers work at the scene of a mass shooting on April 3, 2022, in Sacramento, California. (Photo by Liu Guanguan/China News Service via Getty Images)

Sunday’s violence was the third time in the U.S. this year that at least six people have been killed in a mass shooting, according to a database compiled by The Associated Press, USA Today and Northeastern University.

President Joe Biden called for action on gun crimes in a statement Sunday.

"Today, America once again mourns for another community devastated by gun violence," Biden said. "But we must do more than mourn; we must act."

On Feb. 28, a father killed his three daughters, a chaperone and himself in a Sacramento church during a weekly supervised visitation. David Mora, 39, was armed with a homemade semiautomatic rifle-style weapon, even though he was under a restraining order that prohibited him from possessing a firearm.