After the first two attempts failed over the weekend, Russia announced yet another limited cease-fire that would allow desperate civilians to flee encircled cities through humanitarian corridors, though there was no word as of Monday night that shelling had stopped.

Meanwhile, Ukrainian President Volodymyr Zelenskyy urged his people to keep resisting the assault, which U.N. officials say has forced more than 1.7 million to flee Ukraine. Zelenskyy also called for a global boycott of all Russian products, including oil.

Here’s a look at key things to know about the war:

Has there been progress on safe evacuations?

After the weekend efforts to establish safe passage for civilians fell apart amid continued shelling, with each side blaming the other, the Russian Defense Ministry said Monday that civilians would be allowed to leave Mariupol, Sumy and Kyiv, the nation's capital. Moscow proposed evacuation routes that would lead mostly to Russia and its ally Belarus, which Ukraine rejected.

Later, Russia’s U.N. Ambassador, Vassily Nebenzia, told the U.N. Security Council that Russia would carry out a cease-fire Tuesday morning and open humanitarian corridors leading away from Kyiv, Mariupol, Sumy and Chernigov. Zelenskyy expressed skepticism — saying that instead of an agreement on humanitarian corridors, what Ukraine got Monday was "Russian tanks, Russian Grad rockets, Russian mines."

The two sides held a third round of talks Monday, with Russia’s top negotiator, Vladimir Medinsky, saying afterward that no progress was made toward a political settlement that would end the war. The countries’ foreign ministers are scheduled to meet Thursday in Turkey, according to that country’s top diplomat. 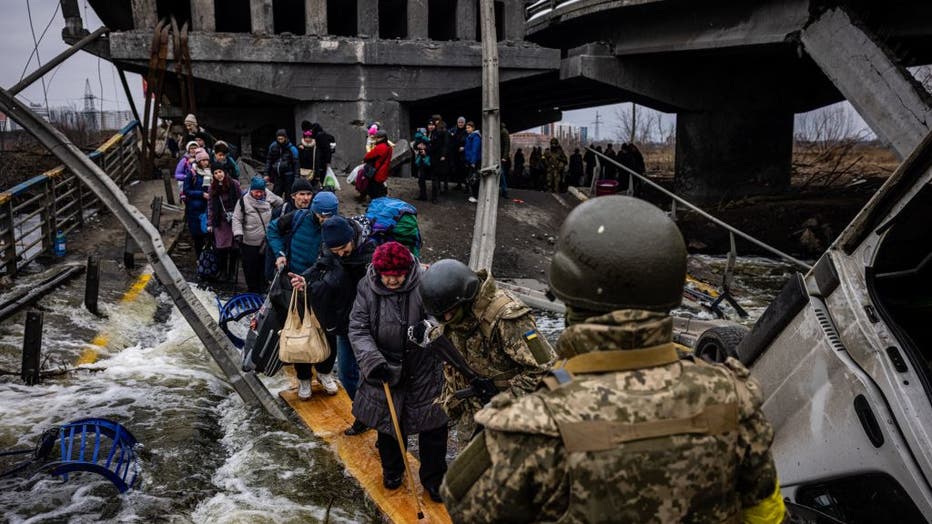 Evacuees cross a destroyed bridge as they flee the city of Irpin, northwest of Kyiv, on March 7, 2022. (Photo by DIMITAR DILKOFF/AFP via Getty Images)

What else is happening on the ground?

In Kyiv, soldiers and volunteers have built hundreds of checkpoints to protect the city of nearly 4 million, often using sandbags, stacked tires and spiked cables.

"Every house, every street, every checkpoint, we will fight to the death if necessary," said Mayor Vitali Klitschko, who noted that fierce battles continued in the Kyiv region, notably around Bucha, Hostomel, Vorzel and Irpin.

Mykolaiv in the south and Kharkiv, the country’s second-largest city, were also shelled.

Ukrainian officials said Russian forces carried out airstrikes after dark Monday on two oil depots in Zhytomyr and Cherniakhiv, two towns about 140 kilometers (85 miles) west of Kyiv. Officials said the strikes blew up 26 oil tanks and nearby residents were being evacuated. Video footage showed a column of fire and black smoke.

Ukrainian refugees fleeing to Medyka, Poland, were greeted with live music, as a man played the piano near the border crossing on March 4. (Credit: Daniel Baird via Storyful)

Is Zelenskyy still calling for a no-fly zone?

Zelenskyy continued to call on foreign countries to impose a no-fly zone over Ukraine, though Western countries have rejected the idea because it would risk escalating the conflict by involving foreign militaries directly. Although the U.S. and many other Western countries have backed Ukraine with weapons shipments, they have vowed not to send troops.

Zelenskyy said in a video address on Sunday that "the world is strong enough to close our skies," and over the weekend he urged U.S. officials help his country obtain warplanes to fight the invasion and retain control of its airspace.

Russian Defense Ministry spokesman Igor Konashenkov said Sunday that some Ukrainian warplanes had redeployed to Romania and other Ukraine neighbors he didn’t identify. He warned that an attack from planes operating out of those nations could be deemed an engagement by them in the conflict.

U.S. Deputy Secretary of State Wendy Sherman said Monday in Madrid, where she met with Spain's foreign minister, that getting military material to Ukrainians is set to become more difficult. She said the Biden administration is considering how to fulfill Zelenskyy’s request for warplanes, considering that Ukrainians would only be able to operate Soviet-era aircraft provided by Poland.

As the war intensifies in Ukraine, and Russian troops have taken control of Europe's largest nuclear plant, Michael O'Hanlon talks about the strategic decisions being made by both sides and the impact their actions have on the world.

What has been directly witnessed or confirmed by the Associated Press?

In Mariupol, Red Cross officials on Monday were waiting to find out whether a safe corridor had been established to evacuate civilians. Most of the shelling of the besieged city has remained on its outskirts, but shells have also fallen at random in all areas.

The situation has become increasingly desperate in the city, with shortages of food, water, and power, and some looting that police have ignored. There is no mobile phone service, so accurate news has become a valuable commodity and rumors abound.

Even hospitals have shortages of antibiotics and painkillers, and doctors have been performing some emergency procedures without them.

Police were advising people to remain in shelters until they hear official messages broadcast over loudspeakers telling them to evacuate.

In the northern city of Kharkiv, meanwhile, Dmitry Sedorenko described the desperate scramble after his apartment block was struck Monday amid heavy shelling.

"I think it struck the fourth floor under us," Sedorenko said. "Immediately, everything started burning and falling apart. It became smoky and difficult to see and then the floor fell through. We crawled out of the third floor. There were dead people. We got lucky."

In Kyiv, the central train station remained crowded with people desperate to leave, and frequent shelling could be heard from the city's center.

Russia appears to be stepping up their attacks against Ukraine, with even more missile strikes and bombings happening overnight in multiple cities across the country. Meanwhile, talks between the two countries are continuing as officials seek a safe way to evacuate people from the areas under combat.

What else is happening with diplomatic efforts?

U.S. Secretary of State Antony Blinken visited Lithuania and Latvia on Monday to calm any fears that they and Estonia, which he'll visit Tuesday, have about their security in the event Russia expands its military operations. The three Baltic countries, which endured decades of Soviet occupation before regaining their independence in 1991, are members of the EU and NATO.

Blinken stressed that the U.S. commitment to NATO’s mutual defense pact is "sacrosanct" and that NATO and the U.S. were discussing stationing troops in the Baltics permanently.

French President Emmanuel Macron, who is one of the few world leaders who has kept an open line of communication with Putin, criticized Moscow’s offer to besieged Ukrainians with safe passage into Russia and Belarus. "This is cynicism" that is "unbearable," he told French news broadcaster LCI.

The New Zealand government, meanwhile, said it plans to fast track legislation that will allow it to impose economic sanctions against Russia.

The U.N. humanitarian chief, Undersecretary-General Martin Griffiths, said the United Nations is unable to meet the needs of millions of Ukrainian civilians caught in conflict. During a U.N. Security Council meeting Monday, he called for civilians to be granted safe passage "in the direction they choose" and for humanitarian supplies to allowed into areas of hostilities.

Meanwhile, Russian lawyers snubbed a hearing at the United Nations’ top court about Ukraine's effort to halt the invasion.

Pentagon press secretary John Kirby gives a briefing, updating the latest on the war in Ukraine, including possible U.S. involvement.

How many people have been killed?

The death toll of the conflict has been difficult to measure. The U.N. human rights office said Monday that it had confirmed the deaths of 406 civilians and wounding of 801 others through the end of Sunday. However, it said it thinks the actual figures are considerably higher.

The World Health Organization said it verified at least six attacks that have killed six health care workers and injured 11 others.

Ukrainian refugees continue to pour into neighboring countries, including Poland, Romania and Moldova. Among them are an unknown number of people with U.S. citizenship, though some haven't been able to flee Ukraine yet.

The number of people who have left Ukraine since fighting began has reached 1.7 million, according to the U.N. refugee agency.

Many gathered in Washington D.C. on Sunday and held a rally in support of Ukraine, as Russia's war on the country entered its 11th day. U.S. Senator Portman (R-OH) delivered remarks about the ongoing invasion and what else needs to be done in Congress and the administration to better support Ukraine.

What effect have the sanctions had?

A growing number of multinational businesses have cut Russia off from vital financial services, technology and a variety of consumer products in response to Western economic sanctions and global outrage over the war.

Two of the so-called big four accounting firms — KPMG and PricewaterhouseCoopers — said Sunday that they were pulling out of Russia, ending relationships with member firms based in the country.

TikTok said users won’t be able to post new videos in Russia in response to the government’s crackdown on what people can say on social media about the invasion, and American Express announced it was suspending all operations in Russia and Belarus.

Netflix also announced it was suspending its service in Russia.