President Joe Biden says Russian President Vladimir Putin's actions in the last 24 hours has signaled the "beginning of an invasion" and announced the first round of sanctions against Russia in response. Implementing full blocking sanctions will not allow Russia to trade with European markets and the Nord Stream 2 pipeline will not move forward, Biden said. The president added that Russia will pay an even steeper price if this continues and the U.S. has no intention of fighting Russia.

MOSCOW - The East-West faceoff over Ukraine escalated dramatically Tuesday, with Russian lawmakers authorizing President Vladimir Putin to use military force outside his country and U.S. President Joe Biden and European leaders responding by slapping sanctions on Russian oligarchs and banks.

Both leaders signaled that an even bigger confrontation could lie ahead. Putin has yet to unleash the force of the 150,000 troops massed on three sides of Ukraine, while Biden held back on even tougher sanctions that could cause economic turmoil for Russia but said they would go ahead if there is further aggression.

The measures, accompanied by the repositioning of additional U.S. troops to the Baltic nations on NATO’s eastern flank bordering Russia, came as Russian forces rolled into rebel-held areas in eastern Ukraine after Putin said he was recognizing the independence of the separatist regions in defiance of U.S. and European demands.

Speaking at the White House, Biden said the Kremlin had flagrantly violated international law in what he called the "beginning of a Russian invasion of Ukraine." He warned of more sanctions if Putin went further. 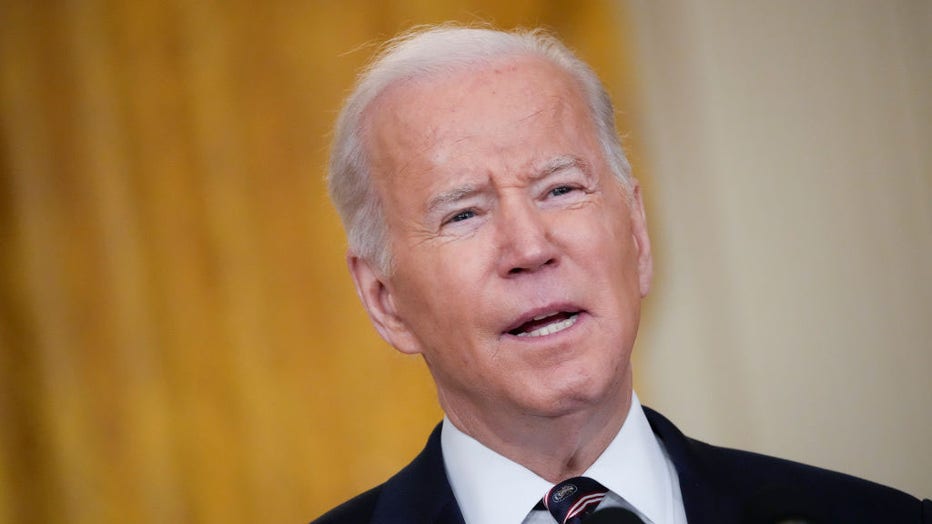 WASHINGTON, DC - FEBRUARY 22: U.S. President Joe Biden speaks on developments in Ukraine and Russia, and announces sanctions against Russia, from the East Room of the White House Feb. 22, 2022, in Washington, DC. (Photo by Drew Angerer/Getty Images)

Hopes for a diplomatic resolution to the threat of invasion, which U.S. officials have for weeks portrayed as all but inevitable, appeared to evaporate. U.S. Secretary of State Antony Blinken canceled plans for a Thursday meeting in Geneva with his Russian counterpart, saying it would not be productive and that Russia’s actions indicated Moscow was not serious about a peaceful path to resolving the crisis.

Western nations sought to present a united front, with more than two dozen European Union members unanimously agreeing to levy their own initial set of sanctions against Russian officials. Germany also said it was halting the process of certifying the Nord Stream 2 gas pipeline from Russia — a lucrative deal long sought by Moscow but criticized by the U.S. for increasing Europe’s reliance on Russian energy.

The U.S., meanwhile, moved to cut off Russia's government from Western finance, sanctioning two of its banks and blocking it from trading in its debt on American and European markets. The administration's actions hit civilian leaders in Russia’s leadership hierarchy and two Russian banks considered especially close to the Kremlin and Russia’s military, with more than $80 billion in assets. That includes freezing all of those banks' assets under U.S. jurisdictions.

Biden, though, did hold back some of the broadest and toughest of the financial penalties contemplated by the U.S., including sanctions that would reinforce the hold that Germany put on any startup of the Nord Stream 2 pipeline; an export ban that would deny Russia U.S. high-tech for its industries and military; and sweeping bans that could cripple Russia’s ability to do business with the rest of the world. 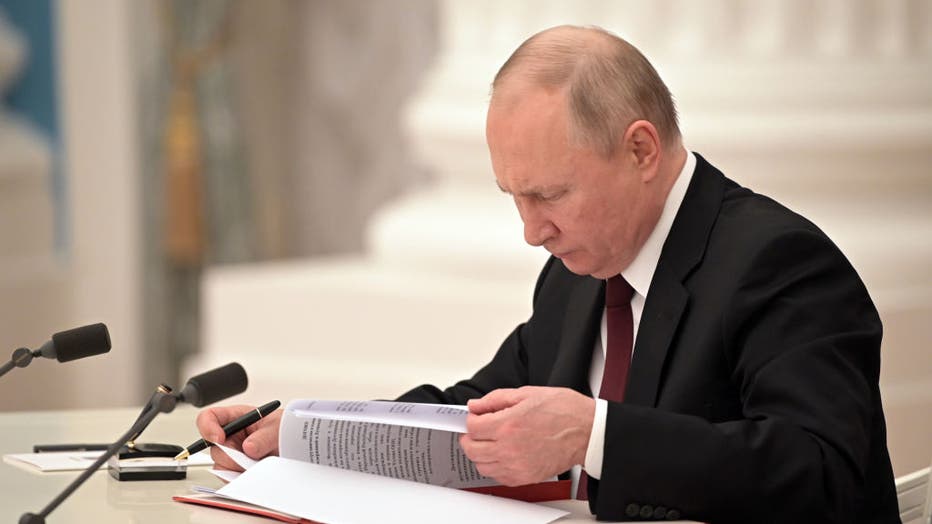 Biden said he was moving additional U.S. troops to the Baltics, though he described the deployments as purely "defensive," asserting, "We have no intention of fighting Russia." The U.S. is sending about 800 infantry troops and 40 attack aircraft to the Baltics and NATO’s eastern flank from other locations within Europe, according to a senior defense official. In addition, a contingent of F-35 strike fighters and AH-64 Apache attack helicopters will also be relocated.

Earlier Tuesday, members of Russia's upper house, the Federation Council, voted unanimously to allow Putin to use military force outside the country — effectively formalizing a Russian military deployment to the rebel regions, where an eight-year conflict has killed nearly 14,000 people.

Shortly afterward, Putin laid out three conditions to end the crisis that has threatened to plunge Europe back into war, raising the specter of massive casualties, energy shortages across the continent and global economic chaos.

Putin said the crisis could be resolved if Kyiv recognizes Russia's sovereignty over Crimea, the Black Sea peninsula that Moscow annexed after seizing it from Ukraine in 2014, renounces its bid to join NATO and partially demilitarizes. The West has decried the annexation of Crimea as a violation of international law and has previously flatly rejected permanently barring Ukraine from NATO.

Asked whether he has sent any Russian troops into Ukraine and how far they could go, Putin responded: "I haven’t said that the troops will go there right now." He added that "it’s impossible to forecast a specific pattern of action — it will depend on a concrete situation as it takes shape on the ground."

The EU announced initial sanctions aimed at the 351 Russian lawmakers who voted for recognizing the two separatist regions in Ukraine, as well as 27 other Russian officials and institutions from the defense and banking sectors. They also sought to limit Moscow’s access to EU capital and financial markets.

With tensions rising and a broader conflict looking more likely, the White House began referring to the Russian deployments in the region known as the Donbas as an "invasion" after initially hesitating to use the term — a red line that Biden had said would result in severe sanctions.

"We think this is, yes, the beginning of an invasion, Russia’s latest invasion into Ukraine," Jon Finer, principal deputy national security adviser, said on CNN. "An invasion is an invasion, and that is what is underway."

Russia President Vladimir Putin made comments on Monday as tensions between Russia and Ukraine continue to mount and an invasion could come at any moment. Putin declared that certain regions of Ukraine, which are supported by the Russian government, are now independent from Russia. The Kremlin also released a statement repeating claims of military aggression that Ukraine has repeatedly denied and disputed.

The White House announced limited sanctions targeting the rebel regions on Monday evening soon after Putin said he was sending troops to eastern Ukraine. A senior Biden administration official, who briefed reporters about the sanctions targeting the breakaway regions noted "that Russia has occupied these regions since 2014" and that "Russian troops moving into Donbas would not itself be a new step."

Western leaders have long warned Moscow would look for cover to invade — and just such a pretext appeared to come Monday, when Putin recognized as independent the two separatist republics in eastern Ukraine, where government troops have fought Russia-backed rebels. The Kremlin then raised the stakes further by saying that recognition extends even to the large parts of those two regions now held by Ukrainian forces.

Putin said Russia has recognized the rebel regions’ independence in the borders that existed when they made their declaration in 2014 — broad territories that extend far beyond the areas now under separatist control and that include the major Azov Sea port of Mariupol. He added, however, that the rebels should eventually negotiate with Ukraine.

Condemnation from around the world was quick. In Washington, lawmakers from both parties in Congress backed an independent Ukraine and vowed continued U.S. support, even as some pushed for swifter and even more severe sanctions on Russia. Senators had been considering a sanctions package against Putin’s regime but held off as the White House pursued its strategy.

Ukrainian President Volodymyr Zelenskyy said he would consider breaking diplomatic ties with Russia, and Kyiv recalled its ambassador in Moscow.

If Putin pushes farther into Ukraine, NATO chief Jens Stoltenberg insisted the West would move in lockstep. "If Russia decides once again to use force against Ukraine, there will be even stronger sanctions, even a higher price to pay," he said.

Zelenskyy said he was calling up some of the country’s military reservists but added there was no need for a full military mobilization.

In an address to the nation, Zelenskyy said his decree applied only to those assigned to the so-called operational reserve, which is typically activated during ongoing hostilities, and covers "a special period of time," without clarifying what that means.

"Today there is no need for a full mobilization. We need to quickly add additional staff to the Ukrainian army and other military formations," he said. The head of the National Security and Defense Council, Oleksii Danilov, said earlier this year that Ukraine can call up to 2.5 million people.