President Joe Biden says Russian President Vladimir Putin's actions in the last 24 hours has signaled the "beginning of an invasion" and announced the first round of sanctions against Russia in response. Implementing full blocking sanctions will not allow Russia to trade with European markets and the Nord Stream 2 pipeline will not move forward, Biden said. The president added that Russia will pay an even steeper price if this continues and the U.S. has no intention of fighting Russia.

WASHINGTON - President Joe Biden on Tuesday rolled out the first of what the U.S. says could be an ever-fiercer, ever-broader cascade of financial sanctions and penalties over Russia’s moves against Ukraine.

Tuesday’s first installment of sanctions hit members of Putin’s inner circle and their families and two banks that the U.S. considers especially crucial to the Kremlin and Russia’s military. Another new U.S. measure limits Russia's power to raise money abroad.

U.S. officials made clear they were holding in possible reserve more devastating measures, in case Russia escalates actions threatening Ukraine's territory and sovereignty. The Biden administration says those more sweeping penalties would cripple Russia's ability to do business at home and abroad, and likely bring on a recession there.

Here's a look at some of the tougher possible penalties that U.S. leaders are holding in abeyance — while watching for new Russian steps against Ukraine. The U.S. has yet to fully disclose which of the options it will use.

Russian President Vladimir Putin's move to order troops into a separatist region of Ukraine has lead to a swift response from the West, with sanctions coming from the U.S. and Germany halting certification on the Nord Stream 2 pipeline. The White House also says more sanctions are coming later on Tuesday.

Germany announced Tuesday that it would suspend its certification of the newly built but never operated Russia-to-Germany Nord Stream 2 pipeline. A multibillion-dollar project of Russia's Gazprom energy company and European companies, the pipeline would carry Russia’s natural gas to the lucrative markets of Europe. It's been a top target of the Biden administration and Republican and Democratic lawmakers alike, who say the project was a strategic mistake from the start, increasing Putin’s political power over Europe by prolonging its dependence on Russia’s natural gas.

Reluctant to split with ally Germany, Biden has warded off repeated attempts in Congress to impose financial sanctions on any company or person that does business that involves Nord Stream 2, effectively making it financially impossible for the pipeline to operate. It's unclear if the U.S. might still impose its own sanctions on Nord Stream 2, to amplify the actions that Germany just took.

Biden insisted in recent weeks that Nord Stream had no chance if Russia invaded Ukraine. "Then there will be no longer a Nord Stream 2. We will bring an end to it," Biden said.

Sanctions on individuals, businesses and entities

U.S. officials suggested that the latest sanctions were only a hint of how far it could go in targeting Russian companies and individuals.

Tuesday’s actions included hitting civilian leaders in Russia’s leadership hierarchy and two Russian banks considered especially close to the Kremlin and Russia’s military, with more than $80 billion in combined assets. That includes freezing all of those banks' assets under U.S. jurisdiction.

But U.S. officials emphasized Washington still could take more of Russia's banks, including its biggest, offline with a push of a button.

Overall, the U.S. and its allies aim to impose sanctions that compel Putin to change his ways, while hoping to minimize the harshest impacts on ordinary Russians and any collateral economic damage on the U.S. and European allies.

Sanctions are imposed on individuals listed on a Specially Designated Nationals and Blocked Persons List through the Treasury Department’s Office of Foreign Assets Control.

Also known as SDNs, the list includes individuals and companies owned, controlled by or acting on behalf of a targeted country. Traditionally, their assets will be blocked and the U.S. is almost completely prohibited from dealing with SDNs. Individuals, groups, companies and even aircraft can be given this designation.

For historical context, Western sanctions issued when Russia invaded and annexed Crimea in 2014 included limits on trade, the blocking of assets under American jurisdiction and limits on access to the U.S. financial system. Those restrictions are maintained to this day on at least 735 individuals, entities and vessels, according to the Office of Foreign Assets Control. 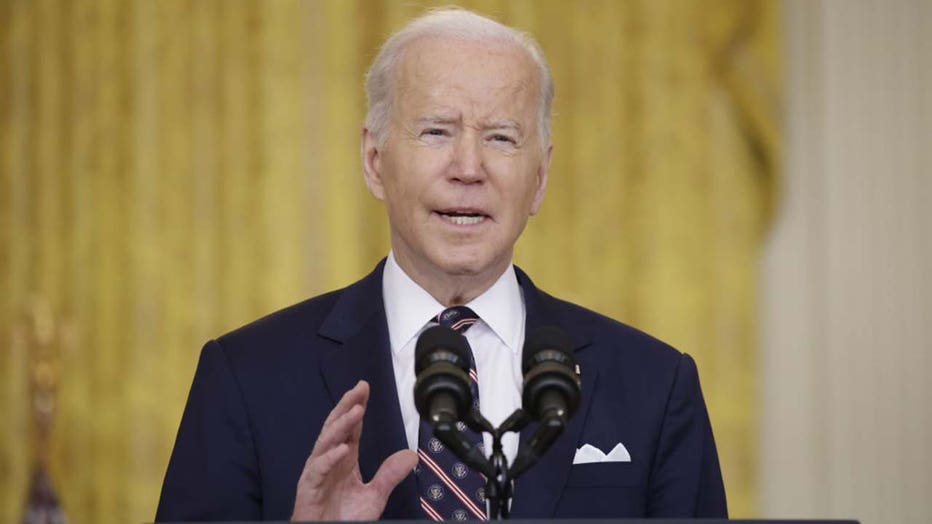 For the U.S. and its European allies, cutting Russia out of the SWIFT financial system, which shuffles money from bank to bank around the globe, would be one of the toughest financial steps they could take, damaging Russia’s economy immediately and in the long term. The move could cut Russia off from most international financial transactions, including international profits from oil and gas production, which in all accounts for more than 40% of the country’s revenue.

Allies on both sides of the Atlantic also considered the SWIFT option in 2014, when Russia annexed Crimea and backed separatist forces in eastern Ukraine. Russia declared then that kicking it out of SWIFT would be equivalent to a declaration of war. The allies — criticized ever after for responding too weakly to Russia’s 2014 aggression — shelved the idea.

Russia since then has tried to develop its own financial transfer system, with limited success.

The U.S. has succeeded before in persuading the SWIFT system to kick out a country — Iran, over its nuclear program. But kicking Russia out of SWIFT would also hurt other economies, including those of the U.S. and key ally Germany.

The United States holds one of the most powerful financial weapons to wield against Putin — blocking Russia from access to the U.S. dollar. Dollars still dominate in financial transactions around the world, with trillions of dollars in play daily.

Transactions in U.S. dollars ultimately are cleared through the Federal Reserve or through U.S. financial institutions. Crucially for Putin, that means foreign banks have to be able to access the U.S. financial system to settle dollar transactions.

The ability to block that access gives the United States the ability to inflict financial pain well beyond its borders. Previously, the U.S. has suspended financial institutions from dollar clearing for allegedly violating sanctions against Iran, Sudan and other countries.

Unlike the SWIFT option and the other financial measures, it’s one the U.S. could do on its own. Many Russians and Russian companies would be stymied in carrying out even the most routine transactions, like making payroll or buying things, because they would have no access to the U.S. banking system.

Explainer: What's going on between Russia and Ukraine?

Concerns are soaring over Russia's conflict with Ukraine, including fears of a full-fledged invasion.

U.S. export controls could cut off Russia from the high tech that helps warplanes and passenger jets fly and makes smartphones smart, along with other software and advanced electronic gear that make the modern world run.

That could include adding Russia to the most restrictive group of countries for export control purposes, together with Cuba, Iran, North Korea and Syria, officials said.

That would mean that Russia’s ability to obtain integrated circuits, and products containing integrated circuits, would be severely restricted because of the global dominance of U.S. software, technology and equipment. The impact could extend to aircraft avionics, machine tools, smartphones, game consoles, tablets and televisions.

Such sanctions could also target critical Russian industry, including its defense and civil aviation sectors, which would hit Russia’s high-tech ambitions, whether in artificial intelligence or quantum computing.

Like some of the other penalties under consideration, U.S. export restrictions would risk motivating businesses to look for alternatives in other countries, including China.