Some smaller Texas school districts are offering a four-day week in an effort to hire and keep teachers. Good Day talked to Texas Tribune education reporter Brian Lopez about the idea in places like Mineral Wells and Chico, located about 50 miles outside of Fort Worth.

MINERAL WELLS, Texas - At the end of April, the Mineral Wells Independent School District, located about 50 miles west of Fort Worth, lost one of its most treasured educators. After teaching there for decades, the teacher was a longstanding community member.

Then in early May, the district lost six more teachers over a 10-day period. It was a worrisome trend for the small district, which has about 3,000 students and employs about 500 staff members, including some 230 teachers.

School administrators found they were leaving to teach in neighboring districts that were operating on four-day school weeks, usually Monday through Thursday.

"We started losing teachers to that four-day school week, regardless of what we paid," said David Tarver, assistant superintendent of Mineral Wells ISD. "That was a big eye-opener."

The school district had to adapt.

The school board voted on May 17 to make the switch to a four-day week, starting with the 2022-2023 school year. The action was needed to attract and retain teachers during a time when educators are hard to come by.

"We had teachers that had multiple offers from our school district and a neighboring school district and they were waiting on our board to vote to whether we were going to do four days or five-day weeks," Tarver said. "We gained some leverage on being able to recruit teachers."

The switch to four-day school weeks has recently become popular among smaller and rural school districts across Texas that need an attractive incentive to recruit and retain teachers and that don’t always have the financial resources to dish out dramatic pay increases like in bigger districts. 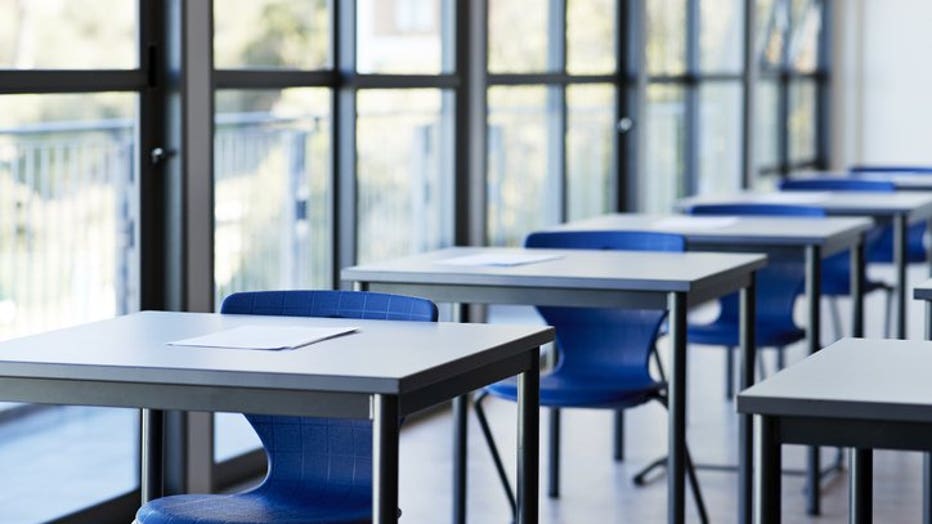 The Mineral Wells district’s base pay is $45,000 for teachers. But it pales in comparison to districts like the Houston Independent School District, the largest district in the state, which has raised the starting salary for teachers to $61,500 for this school year, up from $56,869 in the 2021-22 school year.

The Houston district has no intention of going to four-day school weeks.

Other rural districts have made the same jump to four-day school weeks as they deal with unfilled positions and retention issues. Small, rural districts in various parts of the state, such as Devers, Athens, Jasper and Chico, have also made the switch.

In Texas, schools have to be open for a minimum of 75,600 minutes over a school year, which includes recess and lunch. Districts have control over how these minutes are spread out, giving flexibility to schools to adopt the four-day model. Some are adding time to each of the four remaining school days to make up for the extra day off; others are extending the school year. Jasper ISD is one of the districts that has said the school day will not be extended.

The move to have shorter school weeks dates back to the Great Recession, when school districts were looking for ways to save money. Now, in 2022, the four-day school week also allows districts to trim back on operational costs, but the savings are relatively minimal. This effort is seen solely to remain competitive in the workforce market.

Education policy researchers say more and more rural districts in states like Texas and Missouri are moving to the shorter work week model, especially after the pandemic caused widespread teacher burnout across the country.

While there isn’t conclusive evidence that the shorter schedule harms or improves educational outcomes, school officials across the state will be watching how Texan school districts fare, said Kevin Brown, executive director of the Texas Association of School Administrators.

Emily Morton, a research scientist at the Northwest Evaluation Association who has studied the impacts of a four-day week in Oklahoma schools and students, said the schedule has a small but negative effect on test scores. The NWEA is a nonprofit that studies education issues.

"One thing we don’t know yet is how much [the four-day schedule] matters," Morton said.

For the last 10 years, the Chico Independent School District has been affected by declining enrollment and a shrinking workforce. The solution for the rural district, located about 50 miles northwest of Fort Worth, was approving the four-day week starting this upcoming school year.

"Anybody that had eyes or ears knew that this impending teacher shortage was coming and our view was it was only going to get worse for the foreseeable future," said Chico ISD superintendent Randy Brawner. "You can’t just go out and throw money at your problems. You have to think outside the box and think creatively."

Morton said the Oklahoma school districts she’s researched have implemented four-day school weeks as a cost-saving measure and that she hasn’t seen the shorter schedule being used as an incentive for teachers to stay or parents to move into a district before. In that sense, Texas is unique.

In most cases, teachers and families are thrilled with the four-day week. There are concerns from parents over child care on Fridays, but Morton said she didn’t find conclusive evidence that it is a major problem for parents in Oklahoma. In rural communities, which tend to be home to multigenerational families, kids usually spend their Fridays either working with their parents or at a relative’s house.

"There’s a different sort of labor market in those areas," Morton said. "They are often working nontraditional Monday-to-Friday schedules [and] the district’s often a huge employer in these areas."

Still, school districts in Texas know shrinking the school week is a monumental shift from the norm and some are offering accommodations to families. Chico ISD has given the choice of a five-day week to its special education population. In Mineral Wells, the district is currently figuring out which families need the school to be open on Fridays and how to accommodate them.

Morton said schools that switch to the shorter week almost never go back to five-day weeks unless the state requires it. Her research shows that the shorter schedule keeps teacher morale up and student discipline incidents low.

"Students are in school less, right? So some of it you would expect to reduce," she said. "One big caveat is we don’t know what's happening outside of school."

While there are noticeable positives in changing to a four-day week, Morton is hesitant to give the policy a universal endorsement. She has concerns over whether it’s a sustainable incentive. For one, if every district started doing it, districts that implement it would have no more leverage.

A study in Colorado also found that adolescent students may engage in more criminal activity as a result of the extra day off. Morton also is worried about children who aren’t in safe households and for whom school represents a safe space.

Dan Robinson, associate dean of research in the College of Education at the University of Texas at Arlington, said he fears for the low-income students in these districts because they may get lunch for free or low cost at their schools, so if they’re not in school on Fridays that is one less day they might have that meal.

"I’m afraid that the poor groups out there would be more negatively affected," Robinson said.

Robinson added that the tradeoff of the shorter schedule often is having longer school days, which he thinks might not be a good thing for children. By opting out of the pacing that a five-day week allows, it might seem like schools are trying to cram lessons.

It also remains to be seen if the trend moves to bigger districts, which also have staffing and retention issues. Tarver, of the Mineral Wells ISD, said he isn’t worried so much about his neighboring districts moving to the shorter week model, but is concerned about the big ones. If they offer it, the four-day schedule will be another perk to lure teachers to larger districts in addition to higher salaries and better housing options.

It is unlikely big school districts would make the switch anytime soon, though Robinson believes they can and it would help them solve things like traffic congestion.

Brian Woods, superintendent of Northside Independent School District in the San Antonio area, the fourth-largest district in the state, said it’s unlikely his or other big school districts would go down the four-day route.

Woods said his school days are already over seven hours long and isn’t sure his students, especially the younger ones, would have the capacity to be in school any longer if they were to get Friday off.

He is also worried about child care as it can be harder to find in more urban and suburban areas.

"We’ve got a responsibility to our own staff and to the parents," Woods said.

But Woods understands why the rural areas moved to the shorter schedule as a need to attract talent. He said he won’t close the door on the idea for his district because he doesn’t know how bad the labor shortage could get.

Districts like Houston also would rather increase pay and give raises than cut down the school week.

"We believe maximizing instructional time is critical to accelerating learning outcomes, especially as students recover from learning loss resulting from the COVID-19 pandemic," the district said in a statement.

It’s also much easier to pivot 600 or so kids into a new schedule rather than thousands of them.

"I always use the analogy of a stream versus a river," Brawner said. "It’s easier to divert the course of a stream than it is a river."

Some rural schools say they wouldn’t switch over to the four-day model if they didn’t have to.

"It puts a microscope on me, my administrative staff and my teachers," Brawner said. "But if we weren’t facing a teacher shortage and the loss in enrollment, we would have definitely stayed in a five-day traditional calendar."

Disclosure: The Texas Association of School Administrators and University of Texas - Arlington have been financial supporters of The Texas Tribune, a nonprofit, nonpartisan news organization that is funded in part by donations from members, foundations and corporate sponsors. Financial supporters play no role in the Tribune's journalism. Find a complete list of them here.

When you join us at The Texas Tribune Festival Sept. 22-24 in downtown Austin, you’ll hear from changemakers who are driving innovation, lawmakers who are taking charge with new policies, industry leaders who are pushing Texas forward and so many others. See the growing speaker list and buy tickets.

This article originally appeared in The Texas Tribune at https://www.texastribune.org/2022/07/19/texas-schools-four-day-weeks/.