Abortion rights groups have been demonstrating across North Texas, including outside a Planned Parenthood clinic in Plano and in Downtown Dallas.

DALLAS - Abortion rights groups have been demonstrating across North Texas, including outside a Planned Parenthood clinic in Plano and in Downtown Dallas.

They want the right to abortion to continue to be protected federally.

The U.S. Supreme Court’s draft opinion on abortion is obviously an emotional conversation for many people — not just here in North Texas but across the country. 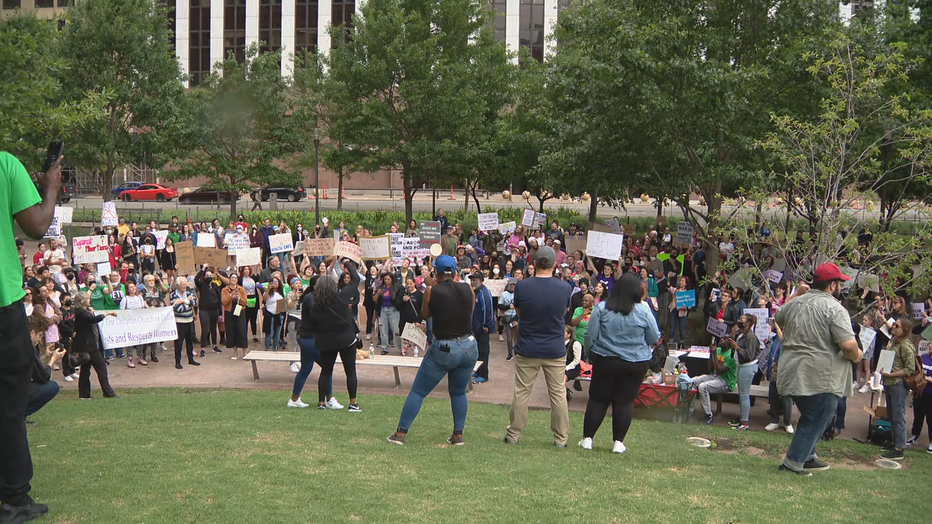 Supporters of abortion rights rallying in Downtown Dallas as the U.S. Supreme Court plans to strike down Roe v. Wade, according to a leaked draft majority opinion.

A Supreme Court reversal would allow each state to make its own abortion law.

Aimee Arrambide is the executive director of Avow Texas, a non-profit advocating for abortion rights.

"I do want to emphasize that as of today abortion is still legal, but Texas does have a trigger law that’s set to go into effect 30 days after any decision is formally released. So this could mean that in a couple of months, abortion at any stage of pregnancy will be completely criminalized in Texas," she said.

Arrambide say she’s had an abortion before.

"It wasn’t a difficult decision for me. My abortion allowed me to choose the path that I was on," she said. "It enabled me to deal with the mental health issues I was facing at the time."

The U.S. Supreme Court plans to strike down Roe versus Wade, overturning abortion rights, according to a draft majority opinion obtained by Politico.

Kyleen Wright is president of Texans for Life Coalition, an anti-abortion group.

"We’ve seen almost 50 years of abortion in this country wreak havoc on women," she said. "A lot of women my age are waking up to realizing they aborted the only children they would ever have, and it is lonely and bitter."

"The legislature increased the funding to help these pregnancy centers help moms and babies by doubling it last year," she said. "So the legislature’s very aware that the tsunami is coming, and our lawmakers want to see Texas shine as well."

"We want people to be able to access any healthcare that they want and choose to have within their own community," Arrambide said.

Avow says 60,000 abortions are performed in Texas each year. Their stance: it’s healthcare.

"If people decide that that’s the right choice for them in consultation with their loved ones or their community, their physician, then they need to be able to do that and access the care that they need," Arrambide said.

"And I have watched women be hurt and even destroyed by abortion all of these years," Wright said.

Whichever side of the debate you stand on, the conversation is not going away anytime soon.

Anti-abortion advocates say Texas’ abortion law effectively shutting down abortions after six weeks of pregnancy has prepared them for a possible supreme court decision by allowing more funding and resources for prospective mothers.