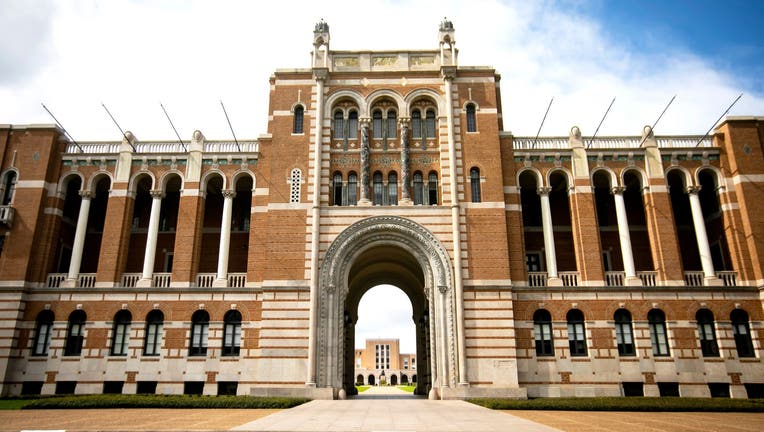 Rice University is one of 16 universities named in a new lawsuit that accuses the private universities of working together to unfairly limit student financial aid. (Annie Mulligan / The Texas Tribune)

A federal lawsuit filed in Illinois over the weekend accuses 16 private universities — including Rice University in Houston — of using a shared formula to calculate the financial needs of student applicants in a way that unfairly limits aid to students who need it.

The lawsuit's plaintiffs are five former students from some of those schools who say the universities are violating antitrust laws, which prohibit competitors from conspiring to set prices.

A Rice University spokesperson declined to comment on the pending lawsuit.

The suit claims that by limiting financial aid, this group of schools engaged in price-fixing, reducing competition and inflating the cost of attendance for those who receive financial aid. The plaintiffs calculated that the scheme affects more than 170,000 financial aid recipients at a cost running into the hundreds of millions of dollars.

"In critical respects, elite, private universities like Defendants are gatekeepers to the American Dream," the lawsuit states. "Defendants’ misconduct is therefore particularly egregious because it has narrowed a critical pathway to upward mobility that admission to their institutions represents."

Universities that do not take into account a student’s financial aid, known as a "need-blind policy," are allowed to collaborate on guidelines to assess a candidate’s financial need, as part of an exemption of antitrust laws provided by Congress in 1994.

The schools are known collectively as the "568 Presidents Group." It was named after Section 568 of the law that allowed them to discuss the guidelines for financial aid.

In 2003, the group established a shared methodology to determine a family’s ability to pay for college. Schools were prohibited from favoring wealthier candidates so they could give away less scholarship money.

But this lawsuit claims that nine of the schools do consider a student or student’s family’s financial situation at certain points of the admissions process. It says some schools have admitted wealthy students of past or potential donors. It also accuses some schools of giving preference to wealthier students in deciding whom to admit off the university’s waitlist.

Therefore, the lawsuit states, all schools that meet as part of this group have conspired to shrink the amount of funding they provide students, which means they are not exempt from antitrust laws.

Rice is not listed as one of the nine schools accused of taking an applicant's finances into account during admissions. Instead, the lawsuit states that it is one of seven defendants that "may or may not have" considered applicants' financial need. And it argues those seven schools should have known the other nine were not abiding by need-blind admissions practices.

According to the complaint, Rice joined the group in 1998 and implemented the methodology in 2003. The school then left, but rejoined again in 2017.

The lawsuit asks for a permanent end to the collaboration among the schools, as well as damages.

The antitrust exemption is set to expire at the end of September unless Congress renews it.

Disclosure: Rice University has been a financial supporter of The Texas Tribune, a nonprofit, nonpartisan news organization that is funded in part by donations from members, foundations and corporate sponsors. Financial supporters play no role in the Tribune's journalism. Find a complete list of them here.

This article originally appeared in The Texas Tribune at https://www.texastribune.org/2022/01/10/rice-university-financial-aid-lawsuit/.