WASHINGTON - A former special forces soldier accused of storming the U.S. Capitol on Jan. 6, 2021 could face up to 20 years in prison after allegedly assaulting police and spearing one in the face with a flag pole.

According to court documents released Monday, the violent acts were allegedly committed by Jeffrey McKellop, who was identified by two witnesses as a retired U.S. Army Special Forces soldier and military contractor.

The 27-page statement of facts alleged that McKellop, who was arrested Wednesday, physically assaulted an officer with "a blunt object, later identified as a flagpole, and resulted in a laceration near the left eye of MPD Officer 4."

"During the investigation, it was determined that three other MPD officers...were physically assaulted by the same subject," the document continued.

Photos and videos obtained by the FBI showed a man alleged to be McKellop carrying a flagpole that had at least two different types of flags attached: a "Blue Line National Flag" and a 13-star "Betsy Ross" flag with the words "Trump. Keep America Great" printed on it.

During an alleged confrontation between police and McKellop, "as MPD Officer 4 positions himself with the riot control spray aimed toward McKellop and the crowd, McKellop picks up a flagpole from the ground and shoves it into the face of MPD Officer 4," the case read. "McKellop then throws the flagpole, similar in fashion to throwing a spear, at MPD Officer 4. McKellop’s actions caused a laceration to MPD Officer 4’s face." 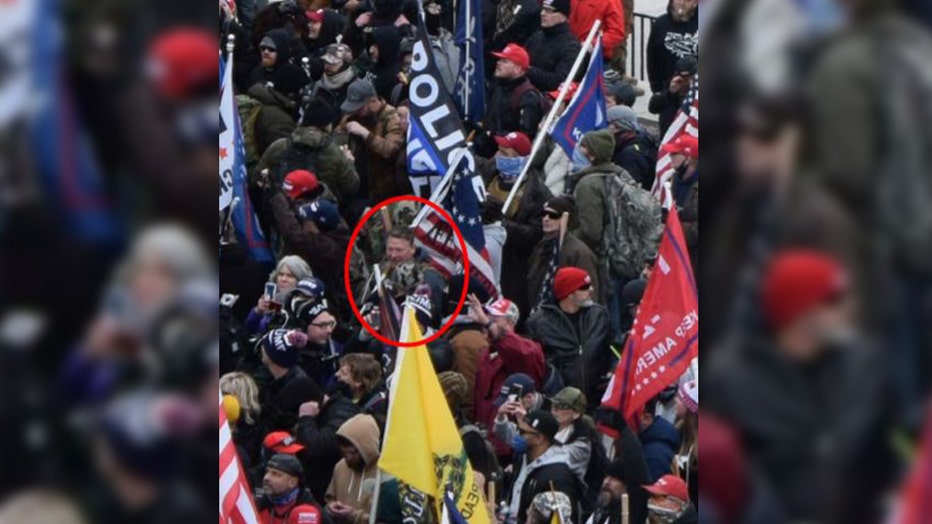 On two separate security camera videos, Jeffrey McKellop can be seen in the crowd, according to the Statement of Facts. (FBI)

If convicted, McKellop, who lives in Fisherville, Virginia, could face up to 20 years in prison.

On Thursday, The FBI’s Washington Field Office released new information and videos of suspects in the most egregious assaults on federal officers during the riots at the U.S. Capitol on Jan. 6, 2021, and is seeking the public’s help to identify them.

The FBI was still seeking many rioters two months after violent extremists breached the U.S. Capitol and committed a litany of federal criminal acts.

"With the assistance of hundreds of thousands of tips from the American people, the FBI has arrested more than 300 individuals who took part in the Capitol riots. Of those, more than 65 were arrested for assaulting law enforcement officers," the FBI wrote in a press release.

The FBI said that "some of the most violent offenders have yet to be identified" and is asking for help in identifying 10 individuals.

"These individuals are seen on video committing egregious crimes against those who have devoted their lives to protecting the American people," said Steven M. D’Antuono, assistant director in charge of the FBI’s Washington Field Office. "We know it can be a difficult decision to report information about family, friends, or coworkers, but it is the right thing to do, and the FBI continues to need your help to identify these suspects."