There is an outpouring of support for retired Plano police officer Kevin Lopez. He's suffered 19 heart attacks and now needs a new heart.

PLANO, Texas - There has been an outpouring of support for a retired Plano police office who needs a new heart. His is failing after 19 heart attacks.

Kevin Lopez has lived a life of service. He’s an Air Force veteran, an ex-firefighter, and a retired police detective.

Now his family hopes people will give back to the man who has given so much.

Lopez had his first heart attack in 2005 while he was on duty as an undercover narcotics detective. He was just 35 years old.

"We were in the middle of Plano, Jupiter and 14th. I just dropped," he recalled. "My buddy started tending to me. We got dispatch on the line. I woke up four days later wondering why everybody was crying." 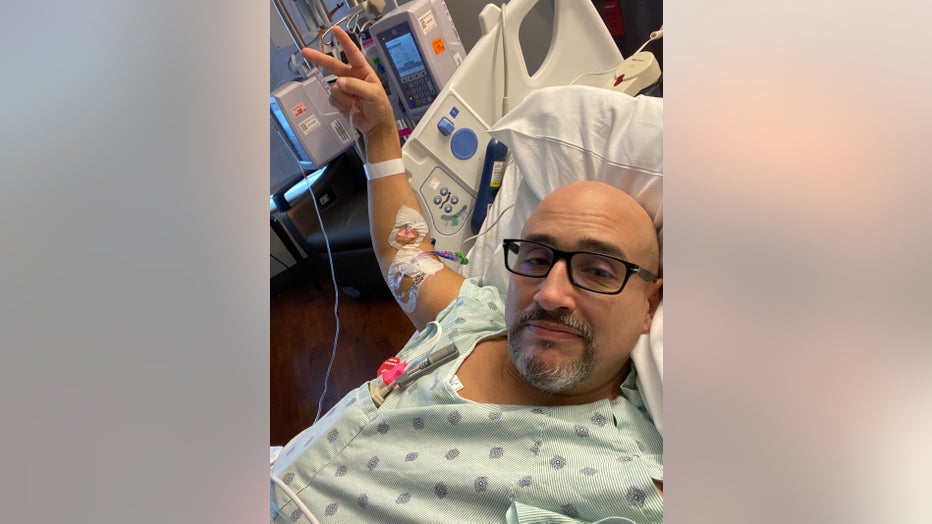 "I’ve had 19 heart attacks. I’ve been defibrillated 22 times. I had a stroke, lost half my eyesight because of it," he said.

Lopez needs a defibrillator to monitor his heart 24/7. The device inside his chest sends a shock when he goes into cardiac arrest.

"Its’ scary. It’s terrifying. It feels like a little car or truck hitting you," he said.

Doctors have told him that solution won’t work much longer.

"I knew this day was coming. But when they sit you there in the hospital and say your heart is done and you need a transplant, it’s pretty hard to wrap your head around it," Lopez said.

Even with insurance, he said the financial burden is also overwhelming.

"I’m retired, retired disabled. But the amount of money I make isn’t nearly enough to cover all my bills. I’ve lost two homes, vehicles, sold most of my possessions to keep up," he said.

Lopez’s daughter, Nicole, set up a fundraiser online to help him raise money.

"We need help now. He really needs help. He spent his entire life in a public service position," she said. "It’s time for us to pay back some of that service to him."

Lopez joined the Air Force at 18. He then worked as a firefighter, EMT and officer at DFW Airport. He spent the next 19 years with the Plano Police Department.

Giving up now is not an option for him.

"I don’t care if I’m on my last breath. I’m still going to be fighting. I’ve got a warrior mentality, warrior mindset and there won’t be any stopping. I know I’m going to make it though this one way or another," he said.

Nicole and his 12-year-old son, Lukas, are his motivation.

The online fundraiser is through the medical nonprofit organization Help Hope live. It will reimburse Lopez for his medical bills or sends the money directly to the hospital to cover costs.

His family is also selling t-shirts and will host a fishing tournament fundraiser in June.